Greek citizens show their practical support for Kiev by calling the Ukrainian embassy in Athens and asking for information on how they can join the Ukrainian army.

These demands are from both Ukrainians living in Greece and Greeks responding to the Ukrainian president’s call for foreigners to form a legion unit of volunteers to fight against the Russian army.

“We do have some phone calls to the embassy from people who want to volunteer to help the Ukrainian army and the people,” said a representative of the Ukrainian embassy in Athens to Proto Thema.

“There are not thousands of these requests but dozens at the moment and we inform all of them to send their request via e-mail with their details,” the representative added.

Due to the fact that the Ukrainian embassy was attacked by hackers, as its representative stated, a new email has been created on the embassy’s Facebook page.

This includes a new telephone number that can be contacted by those who want to offer help or register for the volunteer army.

As a representative of the Ukrainian embassy said, the procedure followed is quite strict with a thorough control of the person who wishes to go and fight.

Ukraine’s Deputy Minister of Defense Hanna Maliar posted on Facebook on Monday that thousands of people had come forward since the appeal by Ukrainian President Volodymyr Zelensky.

Among them are American vets who are applying to go to the region through the Ukrainian Embassy in DC.

Six special ops vets are already there, and two infantry officers are due to go to the Polish border.

Maliar said on Monday: “We already have several thousand statements from foreign citizens who wish to join the resistance to Russian occupiers and the protection of world security from the Putin regime.”

She later announced that the government was offering its own troops 100,000 hryvnias – the equivalent of $3,300-a-month – to enlist. 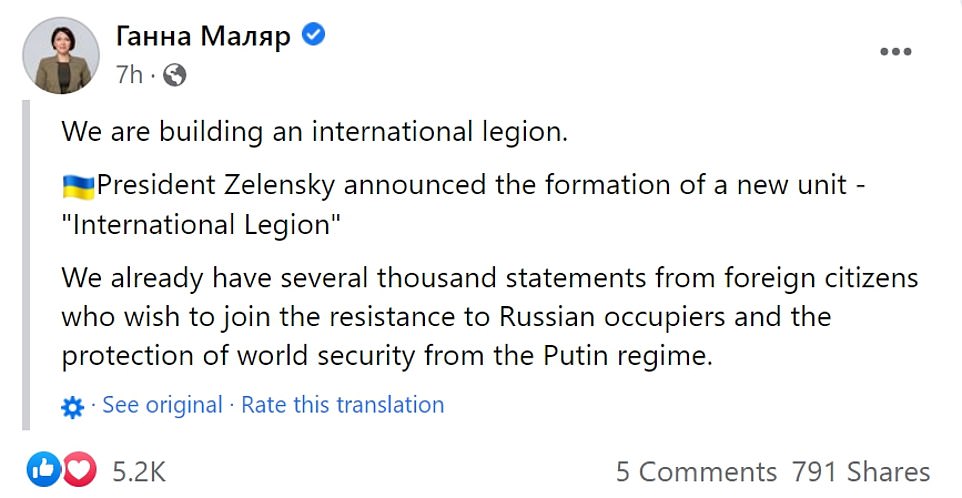 :Soldiers who participate directly in combat or provide national security and defense measures, divert and containment of armed aggression by being directly in the areas and during the period of the specified action ̶ ̶ the size of the additional reward increases to 100,000 UAH per month, in proportion to the time of participation in such actions and events,” she said.

An accompanying statement by Ukraine’s Defense Minister who Alexey Reznikov said it was not a “thank you” to troops, but a show of gratitude.

“This is not done to be told ‘thank you.’ This is being done so that our defenders and defenders know that the country is grateful to them.

“The state has to pay worthy for this important work,” Reznikov said.

The Military Times on Monday reported that it had received requests from several American veterans who had expressed an interest in going to Ukraine to join the effort.

To do so, they have to apply through the Ukrainian Embassy in Washington DC, prove their military experience and wait for approval.

It is a lengthy process that military experts say is necessary to avoid inexperienced civilians rushing to the conflict zone and hindering the effort, but that could lead to a delay in help reaching the soldiers on the ground who need it.

The Ukrainian Embassy in DC did not respond to inquiries on Monday regarding the number of applications it has received.