Nusret Gökçe is looking for staff for his business in Mykonos.

The Turkey-born Kurdish chef, who became known to the public as Salt Bae by the way in which he throws salt on his plates and made a post on his personal Instagram account that went viral, made it known that he is looking for workers for his Mykonos restaurant.

As he wrote, the interested parties will be interviewed on March 9 and 10, at the Grande Bretagne in the centre of Athens.

The posts that have been opened are service, bar, grills, lunch, kitchen preparation, sommelier and runners. 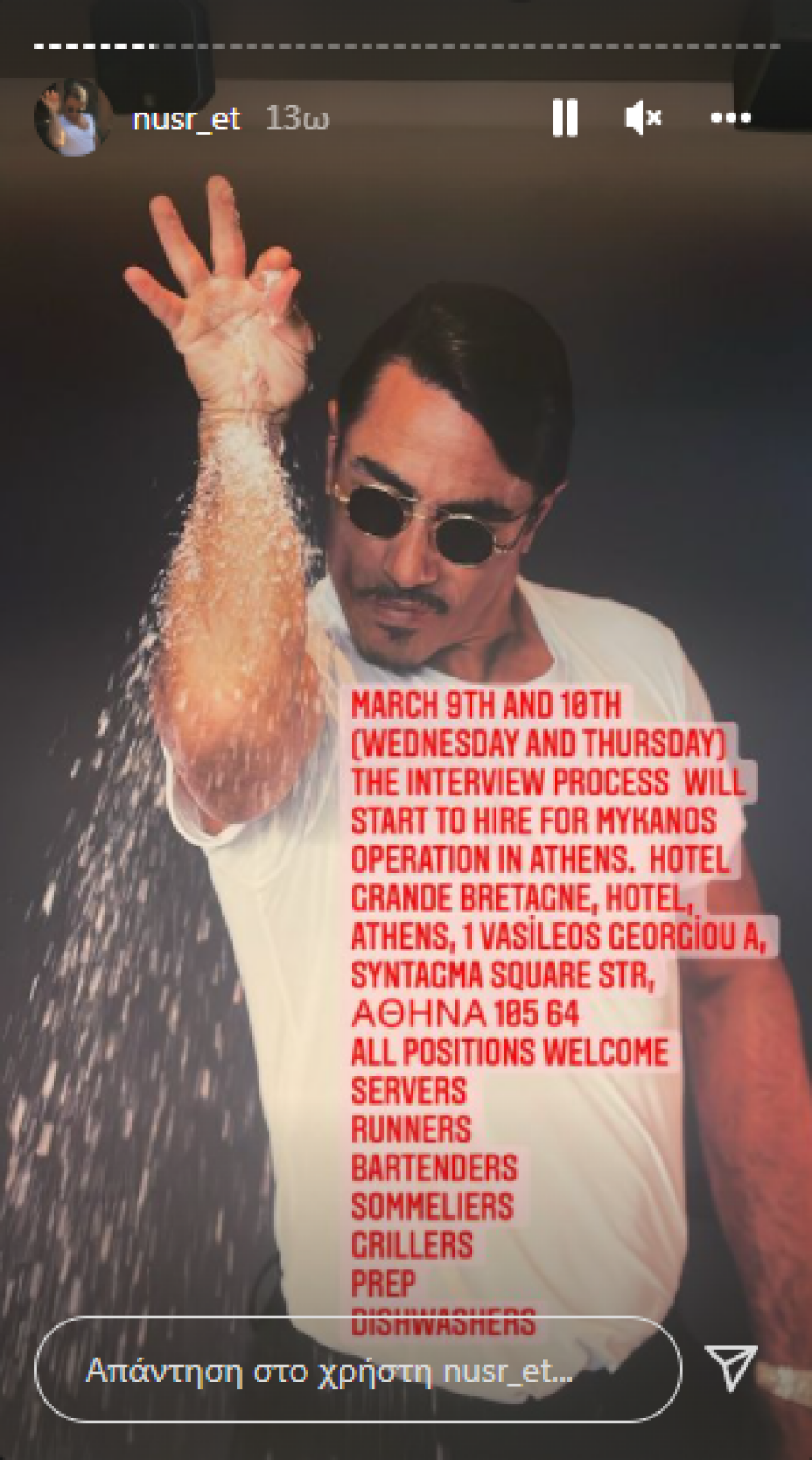 A former employee of Salt Bae’s London restaurant has called the chef’s restaurant a “McDonald’s for rich people” for serving frozen fries, according to a Mail Online article published on Thursday.

Guillermo Perez, who told Mail Online’s Laurence Dollimore he worked as a sommelier at Nusr-Et in Knightsbridge until he was fired in January, said the restaurant is “immoral” because of its price markups.

Charging $850 for a steak and $15 for a can of Red Bull, some users on Twitter branded the restaurant’s prices “extortionate,” Insider previously reported.

“One day I saw a big bag of frozen chips and I thought ‘really? That’s what we are serving people?’ And they had Heinz ketchup and mayonnaise, which you can get from the shop,” Perez told Mail Online.

Perez, who told Mail Online he’s 30 years old and originally from Madrid, said he’s worked as a sommelier for eight years, and claims to have been fired from the company for eating avocado and rice during a shift.

According to Perez, workers were not allowed to eat from the staff canteen past 5:30 p.m., and although he explained that the food he brought with him was his own, he said he was told to meet HR 30 minutes later.

During the meeting, Perez said he was told not to return to work the next day. He said he pressed HR for justification for being fired and was told he was not selling enough wine, according to Mail Online.

Perez added that he’ll soon be starting a new job as a sommelier on a luxury cruise liner.

READ MORE: Salt Bae visits a yiayia in Mykonos and cooks for her.

Greece opens to all passengers just in time for Easter

Stefanos Tsitsipas: How he wished a happy birthday to his little sister

Salt Bae visits a yiayia in Mykonos and cooks for her