German Formula One Sebastian Vettel has sparked outrage for the flag he displayed on his helmet when trying to make a message of peace in the context of the Russian invasion of Ukraine.

Participating in the winter test in Bahrain, the Aston Martin driver's helmet, alongside the peace symbol, adorns the lyrics of John Lennon's 'Imagine' but also displayed the flag of the so-called "Turkish Republic of Northern Cyprus." 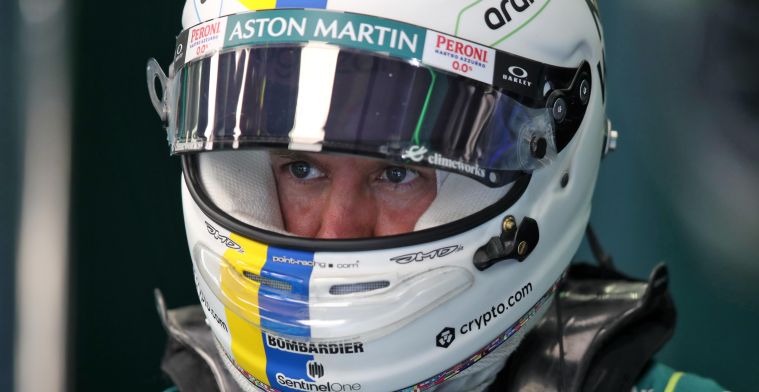 The so-called TRNC is an illegal entity established after the 1974 Turkish invasion of northern Cyprus and recognised by no other country but Turkey.

"Vettel's decision to put the flag of this pseudo-state on his helmet is unacceptable," reads the response from the Cypriot motorsport federation according to Cyprus Mail.

"We demand the immediate removal of the flag from his helmet and the imposition of a penalty on both the driver and his team," reads the continuation of the statement.

Vettel was the most outspoken at the Barcelona test a fortnight ago over Russian’s invasion of Ukraine, as he made clear he would boycott the country’s race if it went ahead.

In the end, Formula 1 and the FIA acted swiftly to drop the Russian Grand Prix from the calendar and cancel its contract under ‘force majeure’ measures.

Prior to the start of the Bahrain test, all the drivers present wore special ‘No war’ T-shirts, using the sunflower symbol in Ukraine’s national colours.

No other country recognises the illegal TRNC besides Turkey in defiance of United Nations Security Council resolutions 541 and 550.

Meanwhile, Ukraine’s authorities accused Russia of preventing the evacuation of people from the heavily besieged port city of Mariupol in the south of the country.

Conditions in the city are dire, with civilians unable to escape. Food, water and electricity are scarce.

Russian airstrikes struck more cities in Ukraine on Friday, local authorities said, in a move that suggests Moscow is expanding its attacks, especially in western Ukraine.

New satellite images appear to show that the long-immobile Russian convoy north of Kyiv has been redeployed to towns and forests outside the city, potentially signaling a renewed push toward the capital.

Russian military planes are flying an average of 200 sorties per day, compared to only about 10 per day flown by Ukraine, according to a Pentagon official.

Much of the airspace above Ukraine is heavily guarded by both Ukrainian and Russian surface-to-air missiles, making air operations risky for both sides.

But Russian aircraft don't have to enter Ukrainian airspace to do damage.

"You can launch cruise missiles from aircraft from a great distance away. And if your target is relatively close, you don't need to enter the airspace," the official said.

For the first time, the official gave details on the total number of functioning Ukrainian fighter jets and how much they're being used.

"They have 56 available to them now, fully operational, and they're only flying them five to 10 hours a day," the official said.

Noting Russia's vast umbrella of anti-aircraft capability over Ukraine and its larger air force, the official repeated some of the arguments we heard from the Pentagon earlier this week about the relative ineffectiveness of sending more aircraft to Ukraine.

"It makes little sense to us that additional fixed-wing aircraft is going to have somehow solve all these problems. What they need are surface-to-air missile systems, they need MANPADS, they need anti-armor, and they need small arms and ammunition, and they need these drones, because that's what they're using with great effect. And so, that's what we're focused on," the official said.

Ukrainian forces are making "terrific" use of drones, especially against Russian ground movements, according to the official. The drones can be also used both for reconnaissance and surveillance.

READ MORE: Analyst on Herzog’s visit to Turkey: “Remember when Erdoğan threatened to break relations with UAE for peace with Israel?”