The leader of the Chechen Republic in the Federation of Russia, Ramzan Kadyrov, a close ally of President Vladimir Putin, said that he is currently in Ukraine.

Kadyrov, who has been accused by NGOs of blatant human rights abuses in his Caucasus republic, uploaded to Telegram a video of himself in military garb studying plans and maps with soldiers around a table in a hall.

He later confirmed in a statement that the video had been recorded at Gostomel, an airport near the Ukrainian capital of Kiev, which had been occupied by the Russian military since the early days of what the Kremlin calls a "special military operation."

This information cannot be independently verified by Greek City Times.

"The other day we were about 20 km from you Kyiv Nazis and now we are even closer," Kadyrov wrote.

He called on Ukrainian forces to surrender "or you will be finished."

"We will show you that Russian practice teaches warfare better than foreign theory and the recommendations of military advisers," he added.

Kadyrov, who rules Russia's Chechnya Republic with an iron fist, is a former rebel turned Kremlin ally with a paramilitary force at his command.

The leader has used social media to bemoan British sanctions placed on him over his role in the war.

Kadyrov complained: “I just want to visit. To walk around London, enjoy the views of the Thames from Tower Bridge, look at Big Ben and Buckingham Palace, wander around Trafalgar Square, to reminisce in Hyde Park and to indulge high-minded thoughts in the National Portrait Gallery.”

“Why do you not let the dream come true of a tourist who just wants to plunge into the world of Shakespeare and Sherlock Holmes?”

His troops are now believed to be occupying villages to the north west of Kyiv and there are “thousands” more waiting in Chechnya ready to be sent to the front.

At the start of the Russian offensive, images circulated on social networks showing a square in the Chechen capital Grozny filled with soldiers claiming to be on their way to Ukraine.

People in the village of Katyuzhanka, 40 miles north of Kyiv, which has been was occupied by Chechen forces, spoke to the Times last week and said residents had been forced out of their homes.

Unconfirmed reports also suggested that “aggressive and intimidating” Chechen soldiers were murdering people in their homes in Irpin, which is on the outskirts of Kyiv.

But not all Chechens are on their government’s side.

Heavily armed fighters have joined the war on the side of Ukraine and pictures have circulated on social media showing Chechen fighters wearing yellow armbands which are used to identify Ukrainian forces.

One picture was said to be captioned: “Real Chechens. Not to be confused with the Kadyrovtsy pigs, who are only good for photo shoots.” 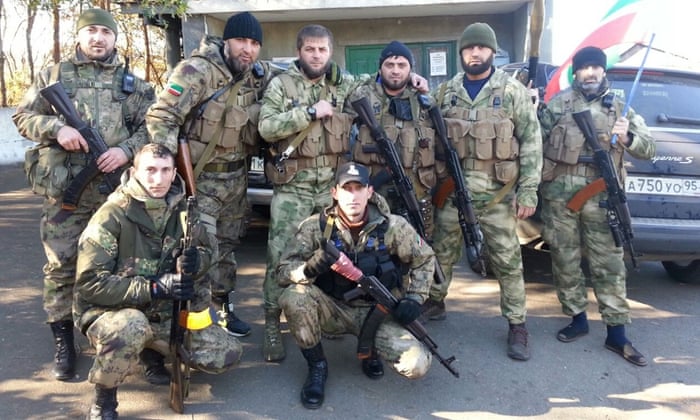 Many of these Chechens are also jihadists who fought with ISIS or Al-Qaeda in Syria.

The Dzhokhar Dudayev battalion, named after the Chechen president from 1991 to 1996, and made up of Chechens who opposed Russia, has also been fighting alongside Ukrainian forces.

Last week, Ukrainian intelligence said Russian spies “who do not want to take part in this bloody war” leaked the whereabouts of a Chechen hit squad, loyal to Moscow, that had been sent in to kill President Zelensky but was eliminated in Kyiv.

Kadyrov is a staunch ally of Vladimir Putin and in February he said the invasion of Ukraine was “too slow”, urging him to send his troops into the country to fight alongside the Russian army.

He said: “Full military coordination, the correct deployment of troops and a decisive assault – that’s all we need. We must finish what we started and do it quickly.

“Since [the Ukrainians] have twice refused to negotiate we must change tactics. That will convince them.”