At 15:00 yesterday afternoon, Greek Prime Minister Kyriakos Mitsotakis was leaving the Vahdettin Palace on the Asian side of Istanbul after two hours of lunch with Turkish President Recep Tayyip Erdoğan.

Diplomatic courtesy, one might say. And yet, the climate was fundamentally different from the first awkward meetings between the two men in 2019, in New York and London, but also their first meeting in June 2021 at NATO after Turkey's summer of provocations that brought the two countries to the brink of conflict.

And if anything emerges on both sides after yesterday's discussion between the two leaders, it is the mutual will that the coming months will not be marked by tension. 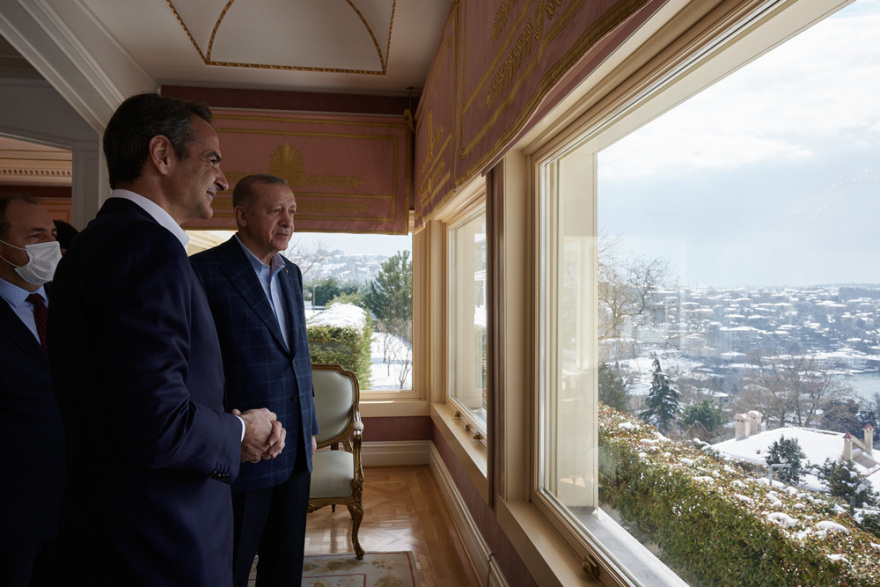 "Calm water", as it was called in previous years, was the goal and seems to be the target. A number of omens point to this conclusion.

Mitsotakis and Erdoğan said it casually at first, looking at the Bosporus and then had a small talk on the table in front of the cameras.

At the same time, Erdoğan did not request the presence of his adviser İbrahim Kalın by his side, with the result that the two men simply spoke with an interpreter in the room. 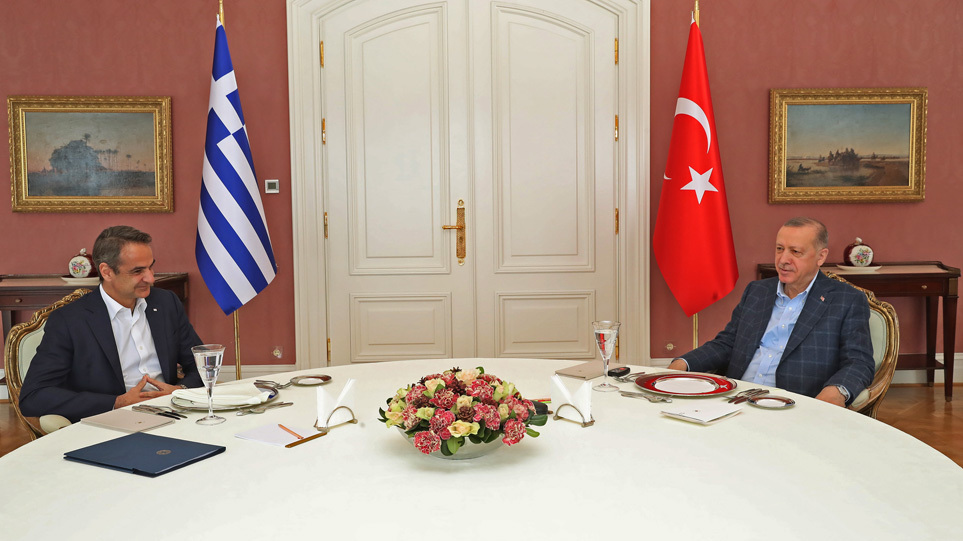 Subsequently, the leaks on both sides were almost identical, with the common denominator being the need to lower tones and move forward bilateral relations on what the two countries can find common ground.

Extremely interesting was the word that Mitsotakis chose to use during his meeting with the Ecumenical Patriarch after the meal with Erdoğan. Mitsotakis spoke about a meeting "foundation" for the improvement of bilateral relations and for calmer days in our region.

This, of course, does not mean that the differences between the two sides were not exposed in the two-hour conversation or that everything was automatically resolved.

According to a source quoted by Proto Thema with direct knowledge of the conversation, the two leaders started from the peripherals, to reach the bilateral, where everyone said their positions. This means that Erdoğan spoke about both the status of the islands and immigration, while Mitsotakis responded with substantiated Greek arguments against the Turkish claim. 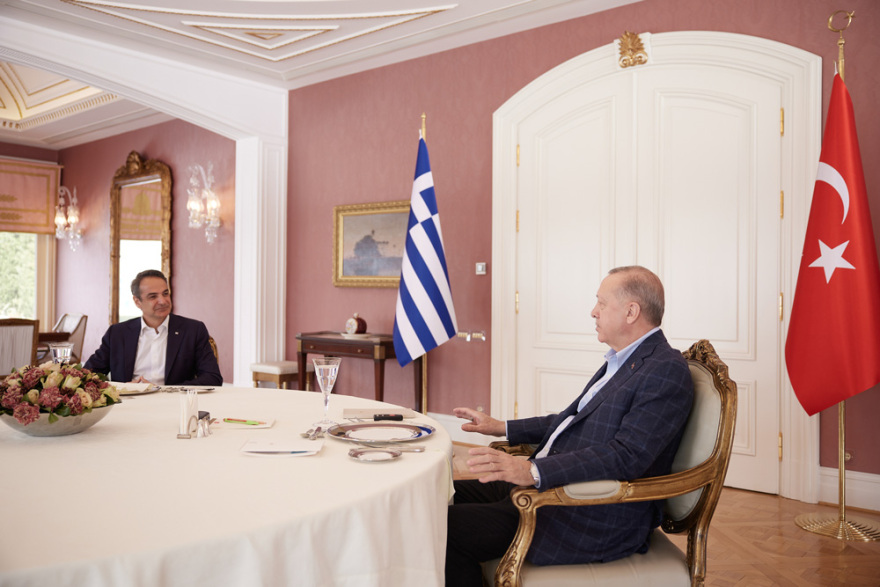 The tones, however, did not rise, the discussion did not go in that direction, as the same source states, but continued with a ping-pong rhythm. And in the end, agreeing that they disagree, the two men concluded a series of Greek-Turkish contacts in the following issue, as long as things improve.

The beginning will be from the meeting for Confidence-building measures at the military level that will take place in April in Ankara, something for which Mitsotakis gave the "green light", which has been pending since November.

There is also a possibility that a Conference of the Countries of Southeastern Europe will be organised in Greece in the summer and that Turkey will also be invited to it. And, finally, if everything goes smoothly, in the autumn the Supreme Cooperation Council, which has been pending for years, will take place in Greece, with the participation of many ministers, under the leadership of Mitsotakis and Erdoğan. At the same time, of course, there will be the so-called "positive agenda", with issues of low policy at the forefront, as well as bilateral trade that can amount to billions of euros.

They also discussed the steps to be taken to achieve the $ 10 billion trade volume target between the two countries. 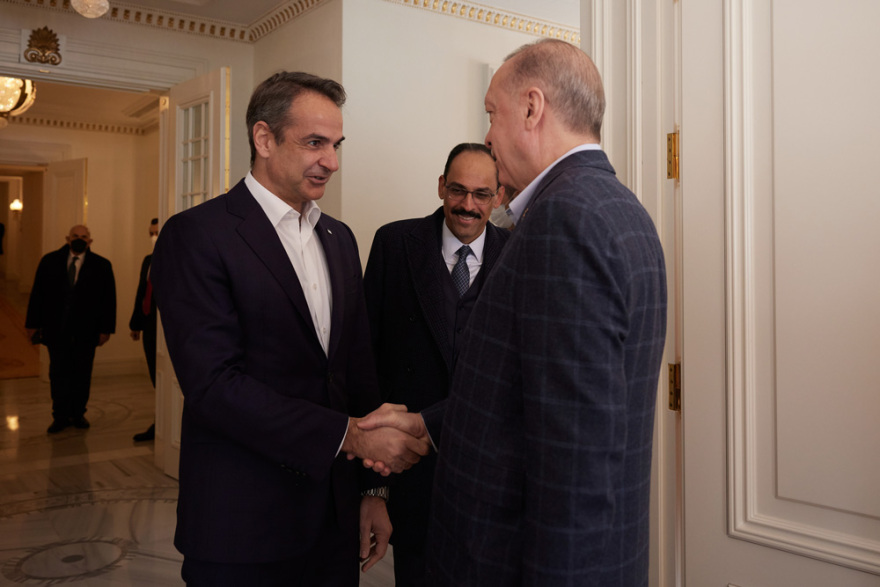 Naturally, the cause of rapid climate change is Russia's invasion of Ukraine, which is creating a whole new environment and the need for a new security architecture in the Southeast Mediterranean.

The same package includes the energy that was discussed, although not extensively, according to information.

Other players, NATO leaders, are also interested in the above, as the two countries are members of the Alliance and no one wants unrest in another area at the moment, and a lot in the Southeast wing of NATO.

At the same time, Erdoğan is in the process of re-engaging with the West, even if he does not cut ties with Moscow, and this obviously means the need to reopen the channel with Athens. Hence, the government acknowledged that the discussion was in an allied spirit.

The good atmosphere at the Vahdettin Palace, however, was clear from the beginning.

With rocket salad, sea bass and Constantinople halva, and no wine on the table, the two leaders had the opportunity for an honest, as sources say, conversation.

At the same time, the two diplomatic advisers, Eleni Sourani and Kalın, had their own lunch next door.

The two also said it at length, formalising the end of their service relationship, which had been shaped into a peculiar "red telephone".

Sourani's term ends in a few days and she is preparing to move to Rome, which is why her successor, Anna Maria Boura, came to Istanbul yesterday, whom Sourani recommended to Kalın and they had a first discussion.

Chechen strongman Ramzan Kadyrov claims to be in Ukraine (VIDEO)