“President Erdoğan wished a speedy recovery to Prime Minister Mitsotakis who tested positive for COVID-19,” a tweet from the Presidency of the Republic of Turkey wrote.

— Presidency of the Republic of Türkiye (@trpresidency) March 14, 2022

Mitsotakis made a round of phone calls to the opposition party leaders on Monday evening which will continue Tuesday morning.

This is in order to brief them on the results of his visit to Turkey, the prime minister’s office said in an announcement on Monday.

Specifically, the prime minister spoke with main opposition SYRIZA-Progressive Alliance leader Alexis Tsipras on Monday at 18:00 and with Movement for Change (KINAL) leader Nikos Androulakis at 19:00.

On Tuesday morning at 10:00 he will brief Communist Party of Greece (KKE) General Secretary Dimitris Koutsoumbas and at 10:30 he will speak on the phone with the President of Elliniki Lysi, Kyriakos Velopoulos.

According to a statement released by the Presidential Communications Directorate, Mitsotakis and Erdoğan have agreed to improve bilateral relations and focus on a positive agenda.

Apart from bilateral relations, many regional and global developments, including the latest geopolitical developments, were discussed at the meeting held between the two leaders, the statement said. 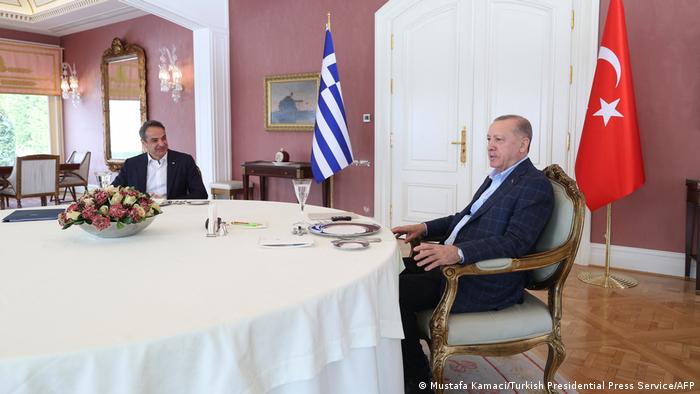 The two leaders underlined that Turkey and Greece have a special responsibility in Europe’s security architecture, which has changed with the Russian attack on Ukraine, the statement added.

They also agreed to improve bilateral relations and to keep communication channels open and discussed the steps to be taken to reach the $10 billion bilateral trade volume, it noted.