200 Greek rebels enter Kalavryta, then the biggest and most populated town in the Peloponnese. Metropolitan Germanos of Patra blessed the Greek fighters at the Agia Lavra monastery, where the banner and flag were raised.

According to some historians, the Greek fighters swore: “Not one Turk left in Moria (Peloponnese), nor in the whole world." 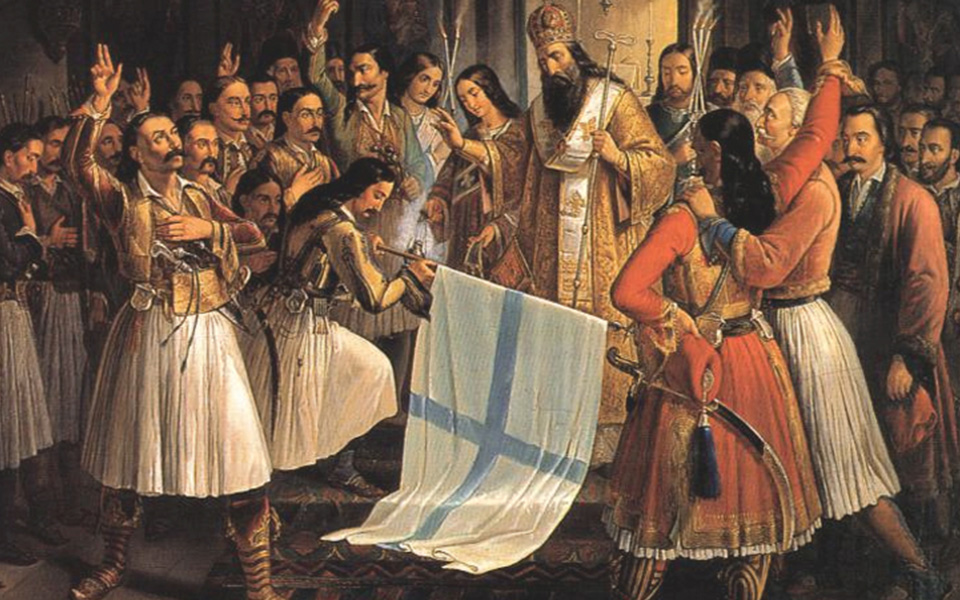 Bishop Palaion Patron Germanos called on Greeks to revolt and raised the flag of the revolution, a tapestrie depicting the Assumption of Virgin Mary that was on the gate of the Church of Agia Lavra.

Led by Sotiris Charalambis, Sotiris Theocharopoulos, Ioannis Papadopoulos and Nikolaos Petimezas, after three days the town was liberated, igniting the Revolution in the Peloponnese.

The Turks were led by Ibrahim Pasha Arnaoutoglou and had barricaded themselves in three towers as they expected military help from the Morea capital of Tripolitsa, which never arrived.

Every year Kalavryta celebrates the liberation of the city with festivities around the Agia Lavra monastery.

For the next four years the locals never saw Turks wandering in the area. On March 23 in Mani, Petrobey Mavromichalis and his warriors entered Kalamata and the whole Peloponnese revolted. Quickly the message of revolution spread to the rest of Greece.

Greeks with the slogan “Freedom or Death” revolted against their ruler and began a brave struggle for freedom/ Historian Nikolaos Papadopoulos had described the liberation of the city as follows:

“It was dusk when approximately 200 warriors arrived at Kalavryta and started the battle for the liberation of the town. Soon the battle spread out as the rebels took over the Turkish officials’ towers, making the town their own. This was the first victorious battle and Kalavryta was the first free Greek city.”

In the years of Turkish rule, Kalavryta was the largest city in the Morea and numbered 40,000 residents. The Turks stayed around the current monastery of Agia Aikaterini, where they had built two mosques.”

A magical night with Melina in Melbourne's Greek heart