The Institute of Digital Archaeology (IDA) in Oxford will take legal action against the British Museum following the institution's inexplicable refusal to allow the Parthenon Sculptures to be scanned in order to make marble replicas of the fragmented pieces, housed in London since 1816.

'TA NEA' reported on the rejected response, which infuriated the Institute, as it was denied access to the Duveen Gallery where the masterpieces of Pheidias are housed.

“I'm really surprised at how short-sighted people can be. This arbitrary refusal reveals the intransigence of the British Museum, its arrogance and snobbishness", stated the director of the Institute, Roger Michel, to TA NEA.

IDA is a partnership between the universities of Oxford and Harvard. The project of reproducing the sculptures "with millimetre precision", which was reported in TA NEA in January: the Institute will offer the copies to the British Museum, inviting it to return the originals to Greece. The initiative received wide publicity in Britain and was 'applauded' by the conservative press, the ‘Times’ and the ‘Telegraph’.

The request to photograph these sculptures with three-dimensional imaging cameras was submitted on 08 February. The answer came the day before yesterday. "Digital scanning plays an important role in research and can lead to new discoveries related to various objects such as the Parthenon Sculptures," the response reads, adding, however, that "we are not in a position to approve your request. However, the reasons for the decision shall not be disclosed, nor shall any justification for declining the request be provided."

"It took almost a month and a half to reply to our request. Every week they would email me and assure me that the request we made is very common and it will be effortless for them to respond positively. In the end, they rejected it, without giving us any explanation," says Michel, a scientific fellow of Trinity College of Oxford.

It was precisely this fact that made him choose to use the judicial route. "This is an arbitrary and irrational decision. The Museum's refusal conceals a prejudice towards us. I do not think it is legally correct. The Museum, as a state-funded institution, must provide unhindered access to its premises."

In April, the head of the Institute will appeal this decision in a London court, stating that he is confident that he will be vindicated. "The Museum is obliged to treat all requests in the same way. As a public body, it is not entitled to act unjustifiably and arbitrarily. It does though. That's why I believe that eventually we will be given (by the court) the right to scan the Sculptures".

AFTER THE APPEAL. At the same time, Roger Michel argues that his move may pave the way for something much bigger: the return of these sculptures to Greece.

"I sincerely believe that our recourse to justice can be a catalyst for developments. The legality of the transfer of these sculptures to London and their retention by the Museum is blurred. So far, the judiciary has not been concerned that the international conventions to which Britain is bound will not allow it to hold onto cultural heritage. Is the British Museum violating some of these international agreements by keeping the Marbles in London?"

Litigation can drag on quite a bit. However, Michel is not going to shelve his ambitious project. "We are able to complete this even without the participation of the British Museum. With the material we have already gathered in other ways, we will be able in a few days to begin the three-dimensional imaging of the sculptures, on the basis of which we will make high-fidelity marble replicas."

The Museum did not provide Ta Nea with any justification for rejecting the request of IDA, other than: "It is not possible to meet all the requests we receive," a spokesman said. 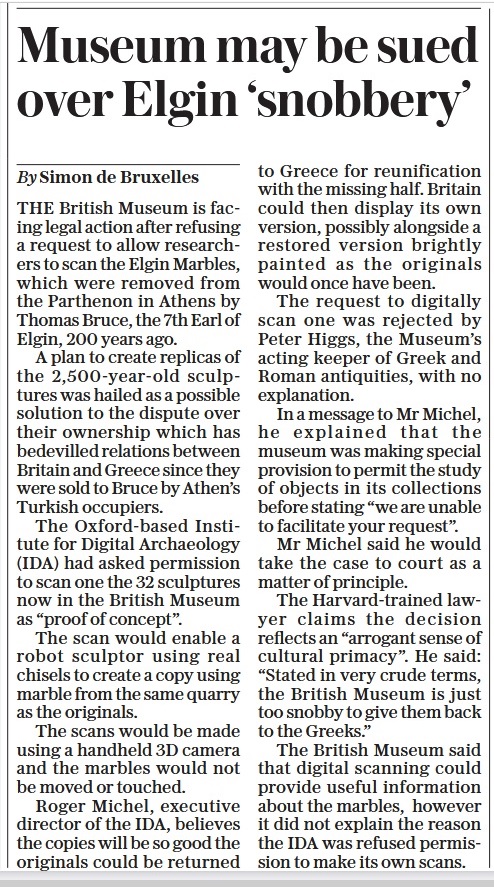 In 2011, the mindset of the British Museum was very different to that of 2022. Architect Niall McLaughlin told The Architectural Review, that his decision to 'quote' the Marbles on the athletes' block came after "researching the history and significance of the screen in architecture through the writings of Gottfried Semper and Karl Bötticher."

In the event, the decision to use the Marbles was prompted by "a clandestine conversation with senior curator Ian Jenkins late one night in the British Museum." Why clandestine?

"The last thing I want is for people to think it is to do with representing the origins of the Olympics," said MacLaughlin.

God forbid that the Parthenon Marbles in London might be permitted to refer in any way to their Greek origins. After all, they are now what McLaughlin himself aptly describes as "deracinated". (Deracinated, for those without a dictionary to hand, originates from the late 16th century French term 'déraciner' — to tear up by the roots) wrote Tom Flynn.

READ MORE: Greece’s Amphipolis tomb in central Macedonia to open to the public under pilot plan.