With Greece’s final signing of the contracts for the acquisition of the Belharra frigates, as well as six more Rafale fighter jets, Friday’s publications of the Turkish print and electronic media have expressed their thoughts of it.

“Greece has signed the purchase of frigates and warplanes from France” is the title of a Yeni Şafak article. 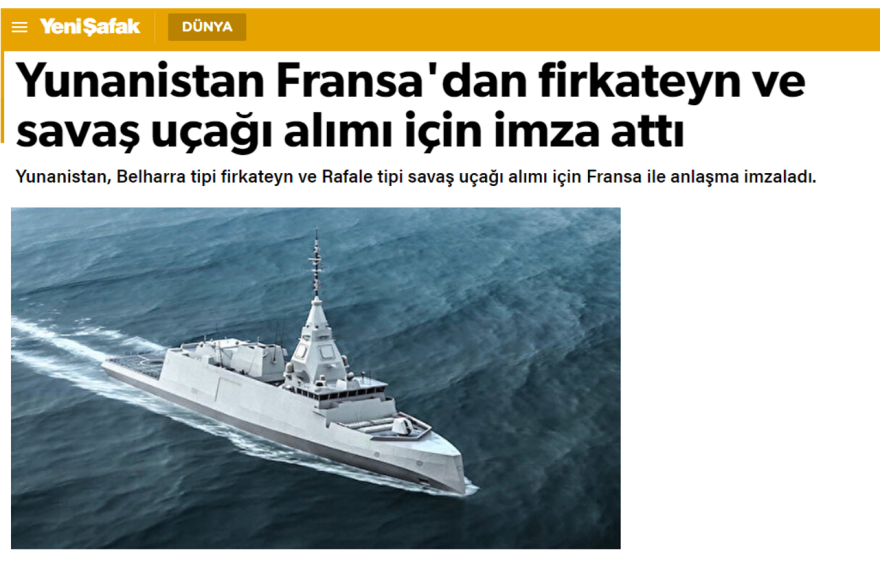 Haber7 refers to Greek-French relations as shaped after the signing of a defence agreement between Athens and Paris in 2021. “Greece signed the purchase of frigates and warplanes from France” the outlet stated, among other things.

“With the agreement signed in Athens between Greek Defence Minister Nikos Panagiotopoulos and his French counterpart Florence Parley, Greece has formalised the purchase of frigates and six Rafale from France,” the Aydınlık newspaper commented.

“Greece has reached an agreement for the purchase of frigates and warplanes from France,” writes Yeni Akit, presenting earlier statements by Prime Minister Kyriakos Mitsotakis, that the Greek-French agreements will bind the two countries for years.

READ MORE: Mevlüt Çavuşoğlu: “We are writing our own history in the Eastern Mediterranean.”

India and OIC – A New Era of Partnership