According to Ukrainian presidential adviser Oleksiy Arestovych, Russia has destroyed most of Ukraine’s defence industry.

“They have practically destroyed our defence industry,” Arestovych said on Thursday in a video address where he welcomed the terms of a proposed peace deal as a win for Ukraine.

He said under a peace agreement discussed with Russia on Tuesday, Ukraine would be protected from future threats by international security guarantees that Russia would not be able to veto.

“This is an ideal agreement that improves our position several times over in a fundamental way,” he said.

It is recalled that Turkish President Recep Tayyip Erdogan’s visited Ukraine in early February and deepened the two countries defence industry cooperation. The growing ties come in the face of Moscow’s criticism as Russian forces continue to mass on the Ukrainian border.

After signing eight agreements with Erdogan, Zelenskiy declared that the defence and aviation industries were the main driving forces behind the country’s strategic partnership.

During Erdogan’s Kyiv visit, a commitment was made to expand the production of Turkish drones in Ukraine and to construct a drone pilot training centre and factory.

Ukraine is a world leader in military-engine production, from powering drones to jet engines to missiles, a legacy of the time when Ukraine was part of the former Soviet Union

Turkey also is seeking engine expertise in developing its own fighter jet and jet-powered drones. A prominent Turkish military helicopter deal collapsed months ago with Pakistan over restrictions by Washington on the use of American engines. Defence analyst Arda Mevlutoglu said Ankara now sees Ukraine as an essential alternative to traditional western military suppliers.

“Turkey tries to diversify its sources because traditionally, Turkish defence manufacturers have been reliant on the United States and European manufacturers. But mainly due to do political relations and sanctions, Turkey has been facing problems procuring technology and components from western countries,” said Mevlutoglu. “Therefore, these factors make Ukraine a very important alternative compared to European and Unified States manufacturers.”

It is unclear at this moment how Russia’s destruction of Ukraine’s defence industry affects Turkey’s production of drones and plans to manufacture fighter jets and jet-powered drones.

Meanwhile, Russian President Vladimir Putin has said that shelling of the besieged Ukrainian city of Mariupol will only end when Ukrainian troops surrender.

Putin made the comments during an hour long phone call with French President Emmanuel Macron on Tuesday night, the Kremlin said in a statement.

But French officials said the Russian leader had agreed to consider plans to evacuate civilians from the city. Russia later proposed a one-day ceasefire for Thursday.

On Thursday morning, Ukrainian deputy prime minister Iryna Vereshchuk said the International Committee of the Red Cross had confirmed that Russia had agreed to open a humanitarian corridor to the city.

Previous attempts to establish a ceasefire in Mariupol have collapsed amid accusations of bad faith from both sides.

New satellite photos showed the destruction caused by the shelling.

The images, released by the Earth observation company Maxar, showed that residential areas have been reduced to rubble and highlighted Russian artillery cannons in firing positions on the outskirts of the city. 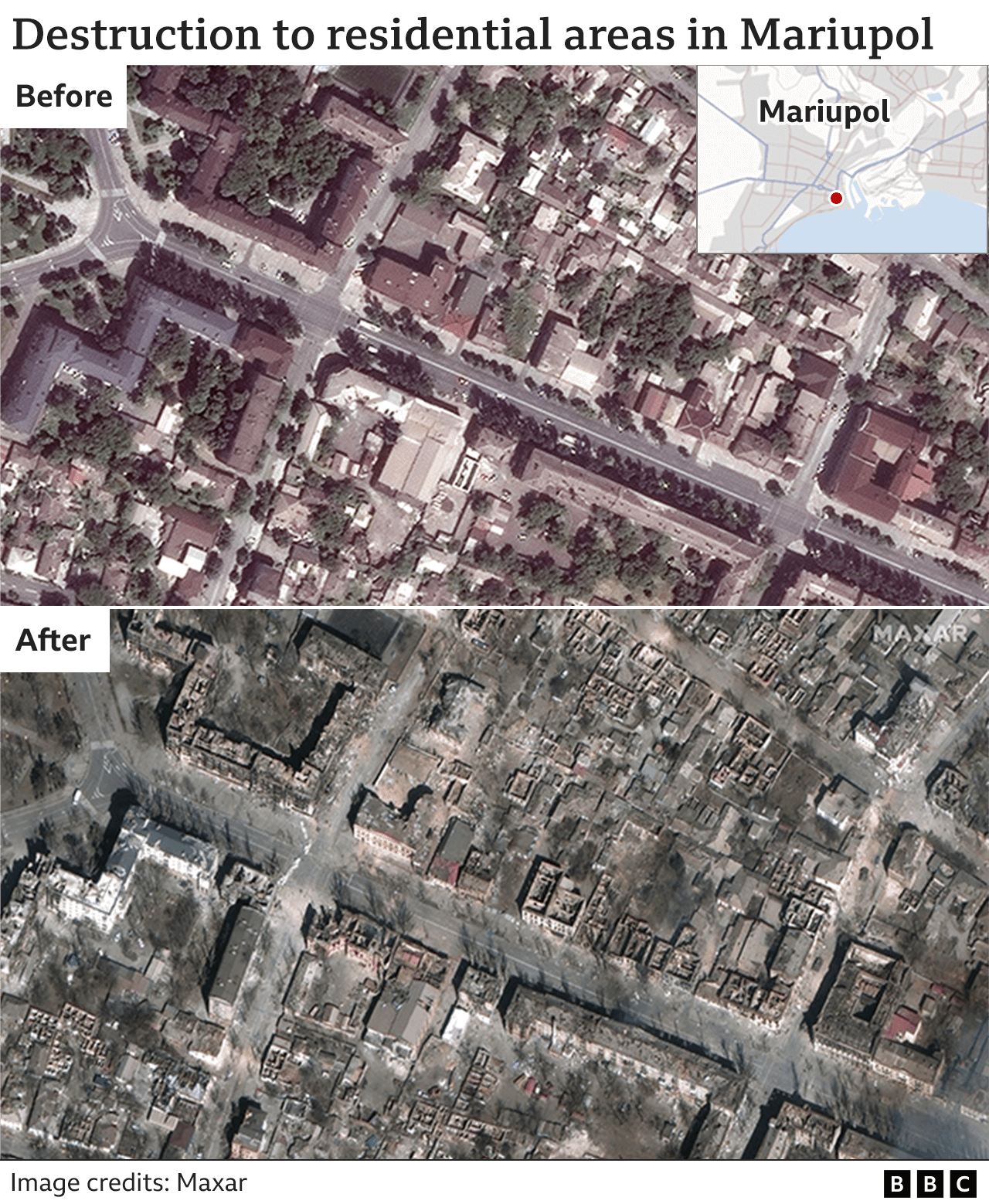 Officials from France’s Elyseé palace called the situation in the city “catastrophic” and added that “civilian populations must be protected and must leave the city if they wish to. They must have access to food aid, water and the medicines they need”.

“This very degraded humanitarian situation is linked to the siege of the city by the Russian armed forces,” the statement said.

Alexandroupolis: a new energy and transportation hub for Greece

What’s next for Ukraine?