Although we know Greek history and mythology is loved all over the world, probably not many would guess that a Greek Mythology Museum exists in South Korea.

What makes this museum all the more interesting is that it’s not even on the Korean mainland, but on the holiday destination of Jeju Island.

Visitors to Jeju Island can now immerse themselves in the world of the Greek mythology with a visit to the museum.

The museum itself is modeled after classical Greek architecture, featuring a row of columns outside and replicas of ancient Greek statues and famous paintings depicting scenes from Greek mythology.

The impressive museum is divided into seven large galleries that are all focused on one aspect of Greek mythology, such as the “Olympus Galley,” the “Love Gallery,” and the “Hero Gallery.”

Each gallery features spectacular white-plaster replicas of imposing ancient sculptures, as well as information regarding Greek mythology and history in both Korean and English.

It even features a replica of an ancient Greek village that visitors can explore, as well as historically accurate costumes they can wear, which help to transport them through time back to ancient Greece.

In the “Olympus Gallery,” replicas of famous ancient Greek sculptures of the gods line the room, along with copies of famous paintings depicting stories from Greek myth.

Visitors can learn about each of the twelve gods and admire the artwork displayed in the museum. The site is also home to a number of replicas of important items from Greek mythology, such as the Trojan Horse, albeit in a smaller scale. 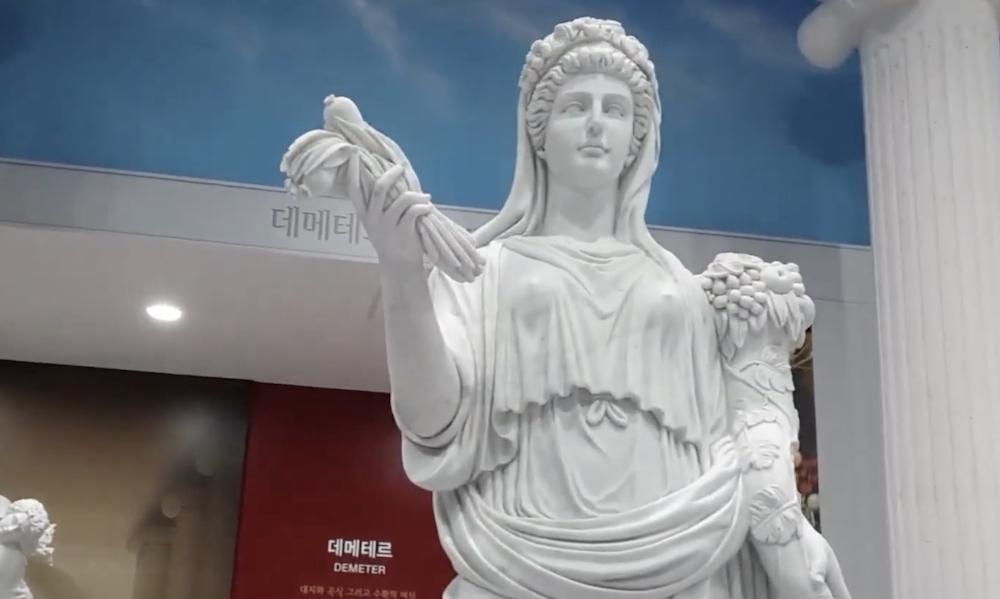 Korea’s Greek Mythology Museum is the perfect place for both children and adults to deepen their knowledge of Greek mythology while also having fun, as the museum also features a number of “trickeye,” or optical illusion, displays.

Jeju Island, located in the Korean Sea just below the Korean Peninsula, is a popular tourist destination for Koreans due to its warm weather, stunning beaches, and dramatic landscapes.

Despite being separated by a great distance, Greece and South Korea have shared a strong bond since the two countries opened a diplomatic relationship in 1961, but even before then, when Greece sent 10,000 troops to fight in the Korean War in 1950.

During an event honouring sixty years of diplomatic relations between the countries that was held in October 2021, Greek musician and composer Tsalikian Miran played the Korean national anthem on the bouzouki, an iconic Greek instrument.

This was the first time that the bouzouki was used to play the national anthem of a nation, apart from Greece, at an official event.