The Greek philosopher Apollonius of Tyana is believed by many to be actually Jesus Christ, something that has raised controversy among academia and theologians for centuries.

From the Roman province of Cappadocia, Jesus Christ’s contemporary Apollonius of Tyana, who lived circa 3 BC – c. 97 AD, was believed at the time by some to be a divine figure who could save humanity.

His similarities to Jesus Christ are undeniable. They both are said to have ascended to Heaven. There are stories of both performing miracles. They were both spiritual teachers.

Bart Ehrman a well-known agnostic atheist and a professor of religion at UNC-Chapel Hill starts his class by sharing this description of a famous man from the ancient world:

Before he was born, his mother had a visitor from heaven who told her that her son would not be a mere mortal but in fact would be divine. His birth was accompanied by unusual divine signs in heaven.

As an adult, he left his home to engage on an itinerant preaching ministry. He gathered a number of followers around him who became convinced that he was no ordinary human, but that he was the Son of God.

And he did miracles to confirm them in their beliefs: he could heal the sick, cast out demons, and raise the dead. At the end of his life, he aroused opposition among the ruling authorities of Rome and was put on trial.

But they could not kill his soul. He ascended to heaven and continues to live there till this day.

To prove that he lived on after leaving his earthly orb, he appeared again to at least one of his doubting followers, who became convinced that in fact, he remains with us even now. Later, some of his followers wrote books about him, and we can still read about him today.

Apollonius defied the bloodiest tyrants who ever sat on the Roman throne — Nero and his successor, Domitian. Apollonius fearlessly traveled from one end of the Roman Empire to the other, inciting revolutions against the despots, and establishing egalitarian communities among his followers, who bore the name of Essenes, early Christians.

And not content with such activities in the Roman provinces, he bravely entered Rome itself, after all philosophers had been expelled from the city under penalty of death by Domitian.

There he openly denounced the tyrant, for which he was arrested and thrown into a dungeon, awaiting certain death which, however, due to his brilliant speech in self-defense and his extraordinary powers of mind, he averted, securing his liberty.

Today few are aware of the Greek from Cappadocia.

In the Ancient World, however, the great philosopher had something like 16 temples built in his honor all over the Mediterranean world, and possibly down through Mesopotamia (Babylon-Iraq) and into India. He was a mythical hero during the time of the Roman Empire.

Apollonius was a charismatic teacher and miracle worker who became a follower of the religious teacher and mathematician Pythagoras and was heavily influenced by his philosophies.

It is the ancient Greek philosophical thought that separates his beliefs from Jesus Christ. 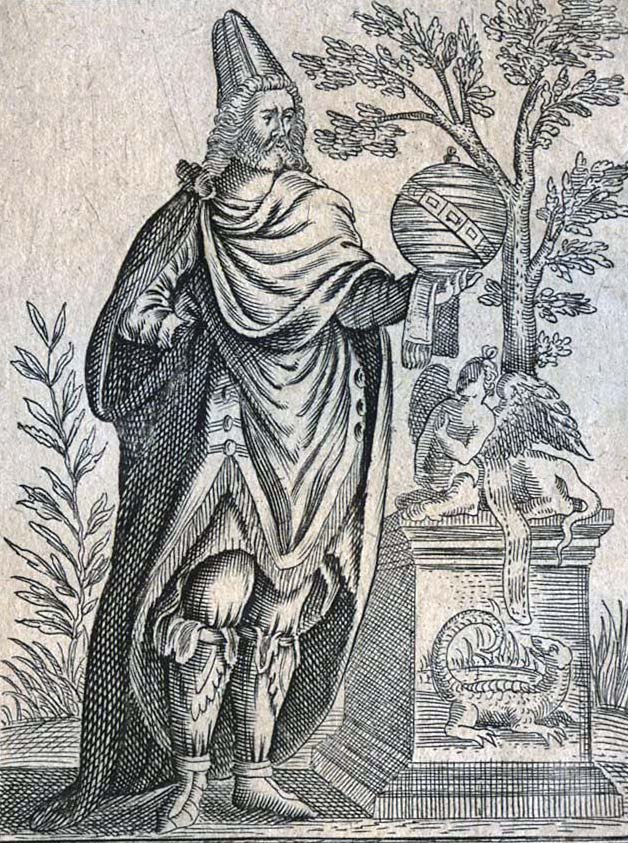 He taught that prayers and sacrifice were useless and that God really did not want to converse with men.

“The gods do not need sacrifices, so what might one do to please them? Acquire wisdom, it seems to me, and do all the good in one’s power to those humans who deserve it,” he had said.

He traveled widely around the Mediterranean and into India as a preacher, speaking his message and healing the sick.

An epigram ﬁrst seen in Adana in Cilicia, but now known to be from Mopsouhestia, celebrates him as one ‘named after Apollo’ who ‘extinguished the errors of men’ (ἀνθρώπων ἔσβεσεν ἀμπλακίας) and was sent by heaven (or taken up into heaven) ‘to drive out the sorrows of mortals’ (ὅπως θνητῶν ἐξελάσειε πόνους).

The earliest and by far the most detailed source is the Life of Apollonius of Tyana, a lengthy, novelistic biography written by the Athenian sophist Philostratus which he completed long after his death, probably in the 220s or 230s AD.

Among the miracles that were attributed to him by Philostratus, was saving the city of Ephesus from a plague. It is also claimed that he brought the daughter of a Roman Senator back to life.

In one case he stopped a follower from marrying a woman who turned out to be a “lamia”, a type of disguised demon, and in doing so saved his life.

Philostratus implies on one occasion that Apollonius had extra-sensory perception. When emperor Domitian was murdered on 18 September 96 AD, Apollonius was said to have witnessed the event in Ephesus “about midday” on the day it happened in Rome, and told those present “Take heart, gentlemen, for the tyrant has been slain this day …”.

Both Philostratus and renowned historian Cassius Dio report this incident, probably on the basis of an oral tradition.

There are several accounts of the death of Apollonius. In one, he was arrested by Septimius Severus but disappeared from his cell and was never seen again. In another version, he rose into heaven from a temple in Asia Minor.

In most stories, it is claimed that he disappeared about the age of 100 and was still youthful.

Philostratus’ biography of Apollonius has many skeptics. Some researchers believe that it was written on the instructions of Empress Julia Domna, the wife of Emperor Septimius Severus and the mother of the bloody tyrant Caracalla.

They believe that the Empress commissioned the biography by Philostratus in order to counteract the popularity of Christianity. She wanted to strengthen paganism in the Empire and was worried about the threat from the Christians.

This means that the real figure of Apollonius may have been lost. Philostratus may have misrepresented him in order to turn him into a pagan alternative to Jesus Christ.

This appears to have been successful and Apollonius was honored by many, including the Emperors Julian and Aurelian and his image was worshipped in many temples for centuries after his disappearance.

This was not enough to stop the growth in the Christian Church. The worship of Apollonius declined after Constantine made Christianity the official religion of the Empire.

Philostratus’ biography may have distorted Apollonius, so today we do not know who he actually was. Was he a fraud, a religious prophet, or a serious religious philosopher? We will never be sure.

As Edward Whelan wrote in Classical Wisdom “What can be said with certainty is that Apollonius of Tyana was an extraordinary figure in the ancient world.”

Turkish analyst: We will be defeated by the Greek Rafale if our F-16s are not modernised