Who is the monk on Mount Athos, whose recipes have been included in the menu of some of the most expensive restaurants in the world?

The elder Epifanios passed away prematurely at the age of 64, due to the COVID-19 pandemic. Nevertheless, his legacy was launched during the quarantine.

At a time when the return to the fundamental, the need to get rid of the unnecessary, the search for a lost spirituality, but also the increasingly widespread choice of excluding meat is identified with the whole philosophy of Epifanios himself. “We cook with love for our neighbor. We eat with restraint. As much as it should. No meat all year round, lots of herbs and fruits. We strictly observe fasting. It is a simple, healthy diet, without fat,” he said.

The famous chef Jamie Oliver, just a week ago, during his show, remembered the man, their meetings in his cell and how it affected him.

The British chef Gordon Ramsey, in an interview with “Radio Times” a few days ago, talking about the effect of the pandemic on the restaurant, revealed that he has one of Epifanios’ books.

One of the finest restaurants in Paris, Pierre Gagnaire, recently included a dish inspired by a monk’s recipe. Simple, humble, with pure affordable ingredients, mild taste and vegetarian tendency. These are the characteristics of monastic cuisine that is usually limited to monasteries and not to luxury Michelin restaurants.

A monk on Mount Athos, however, took care to change that.

Elder Epifanio spent his life cooking for the outside world, often traveling abroad, to conferences, exhibitions and food and beverage competitions. His culinary art was the ideal mixture of Mediterranean diet and Mount Athos tradition, with five or six ingredients, almost never including meat.

He was also opposed to its substitutes, such as using soy instead of minced meat. His recognition had reached such a point that he participated in world conferences.

There he presented the cooking of Mount Athos to 1,600 top chefs from around the world. 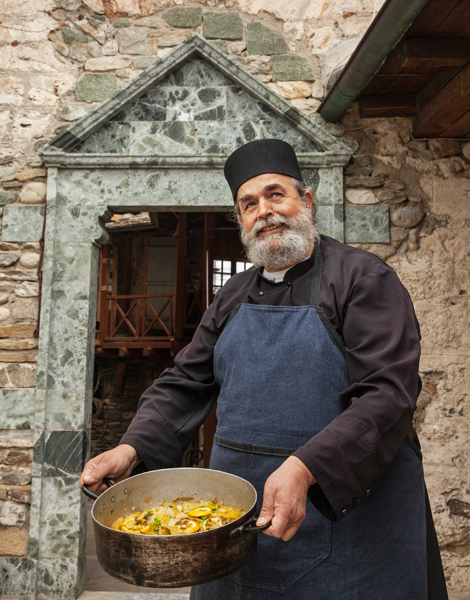 In fact, some of the greatest personalities had visited him in his cell on Mount Athos, participating, at his urging, in the cooking process and enjoying his famous dishes.

Despite his recent death, his legacy spread, especially during the past two years, mediating the pandemic at breakneck speed.

His simple but imaginative cooking, the attitude of life and the spirituality that accompanied it, probably seemed like medicine in the dystopian and unprecedented situation of the pandemic.

Thus, the elder Epifanio became a symbol of the new trend in nutrition, which is summed up in “conscious eating” – What transforms man’s relationship with the environment, animals, himself and others.

Epifaios’ cooking has reached the award-winning three Michelin restaurant in New York “Berdardin”, which includes his famous recipe. Jamie Oliver also cites him as his source and the Telegraph absolutely loved his food.

The vineyard of Mount Athos

Epifanios came from a simple, rural and virtuous family from Nikisiani in Kavala. He was the only one of the five brothers who followed his mother to the kitchen, helping her and watching over her.

He cut potatoes, peeled vegetables and sucked every housewife’s secret.

The oldest monastery of Mount Athos was founded in 974 by Saint Athanasios the Athonite, founder of Mount Athos and confessor of the emperor Nikiphoros Phocas. In his will, in fact, he had decided to establish the vineyard of Mount Athos there.

There were two main reasons why the monks attached importance to the vineyard. The first is that wine is considered a food, just like oil and olives. The second is that nama is produced from wine, that is, the wine of the Holy Communion.

Such a vineyard, therefore, had to exist on Mount Athos, as well as in many monasteries.

When Epifanios went to Kathisma, the Vineyard was in ruins, abandoned. He rolled up his sleeves, determined to regenerate it and after hard work turned the vineyard into a jewel.

The second thing he did was to plant vines, as the previous ones did not produce anything. He started the production in 1995. That is, five years after he settled there.

That year was the first production.

It was marked, in fact, by a revolutionary act. Epifanios bottled the wine. He created elegant bottles, which were labeled Mylopotamos. This provoked a variety of reactions, as Mount Athos was not accustomed to such practices.

Now, there is no monastery and cell that does not have bottled wine. He was a pioneer!

At the same time he passed on his great love, cooking. It did not take long for him to become a chef, having gained many years of experience from the older elders of the monastery.

They conveyed to him the importance of using simple and seasonal raw materials. Beans in season, tomatoes in season and so on. The other thing he did was use simple local ingredients and excellent olive oil.

With a few ingredients, Epiphanius worked wonders. When asked how he did it, he said that cooking for him was “an expression of love for his neighbour.”

They remember him waiting patiently in the oven, explaining that he wants time and passion, but jokingly not discovering his secrets.

His fame spread in Greece and abroad. From his Seat began to pass thousands of people a year, passers-by and visitors for a few days.

He cooked with them all. At the urging of many of his own people, he wrote his cookbook with Mount Athos recipes. Until then there were only scattered recipes.

Several monks in the “Gerontika” (the tradition books of Mount Athos and not religious) described the food that must be cooked everyday, depending on fasting and rules.

They did not, however, take the form of recipes. They were more like prompts.

Epifanios read them, collected them, listened to the experiences and memories of the elders, worked on the recipes in the kitchen of Kathisma, corrected, added, put his own ideas and thus created his book: “The cooking of Mount Athos”.

His book was translated into eight languages and there were endless trips, appearances and interviews around the world. During these years he traveled all over Europe and beyond. He had already met almost all the European leaders who visited Mount Athos.

Either a prominent person already knew Epifanios and chose to meet him, or they urged the visitor, after arriving on Mount Athos, not to miss the opportunity to spend time with him and enjoy his cooking. It had become a point of reference.

Jamie Oliver used to go once a year, Uberto Echo even more often. European politicians, businessmen, artists and intellectuals visited. In the past he had cooked for the Ecumenical Patriarch Bartholomew and the Patriarchs of Moscow, Jerusalem and Antioch.

In a makeshift kitchen with gas, set up in Ladadika, Thessaloniki in September 2019, Epifanios prepared a fish dinner for about 30 distinguished American guests, including a gastronomic critic of the New York Times.

She had then spoken of a “gastronomic miracle”.

And Russian President Vladimir Putin asked to meet him.

A special visit was that of the then Speaker of the Italian Parliament and leader of the Communist Reconstruction Fausto Bertinotti. The Italian politician is an atheist, but that did not stop him from being impressed by Epifanios and spending time with him. 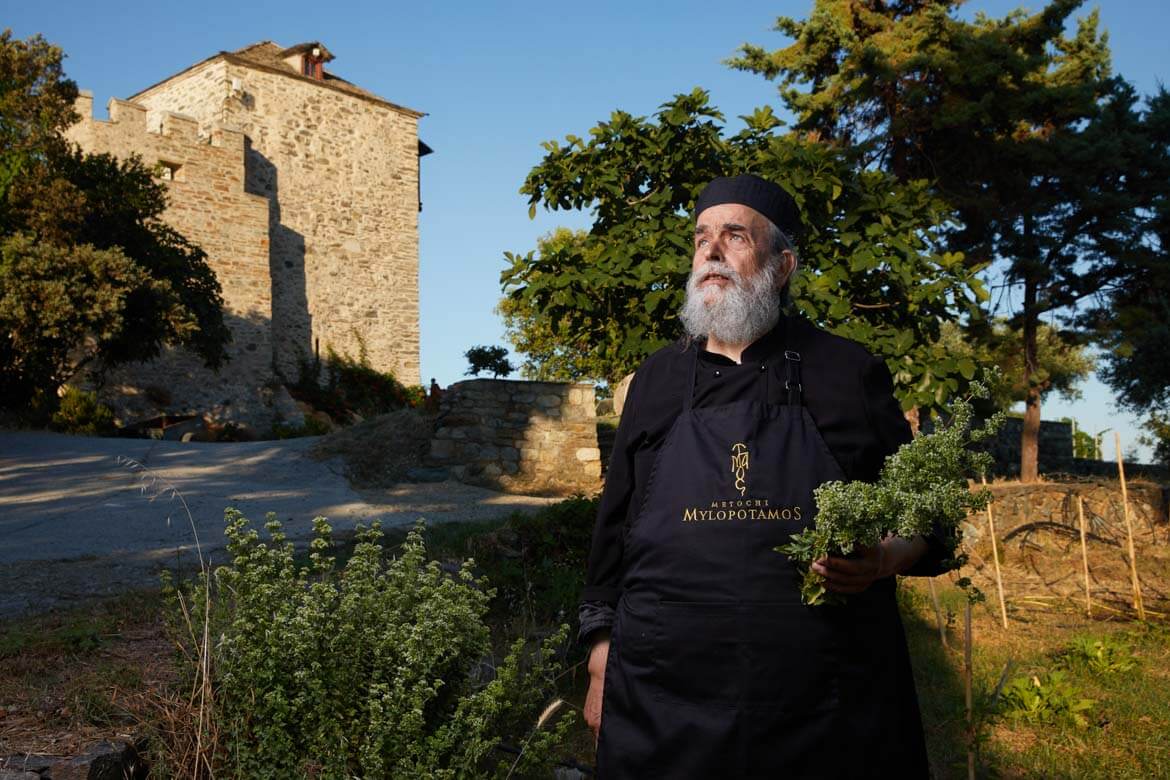 Besides, the Elder loved to talk about religion, current affairs, philosophy and of course cooking. He had humour, kindness and ingenuity that won over the world.

His trips abroad were carefully planned and included a public cooking demonstration, usually at a well-known restaurant, in countries such as France, Italy, Switzerland, Germany and Spain.

“But I learned from the elders how to fry the onion over a low heat, because they said that the sweeter the onion becomes, the tastier the food will be,” Epifanios said to a gathered crowd once.

“I also learned that all foods at the end of cooking require patience and courage, when we wait for the excess juices to leave on the coals,” he added.

The octopus soup recipe had left the French chefs of top restaurants speechless who hurried to deify him and borrow it.

“I did not go to cooking schools, nor do I have a degree,” he said when asked how he learned so much about cooking and the chefs “pulled their hair out.”

He answered them in Greek, with one of his best friends translating. 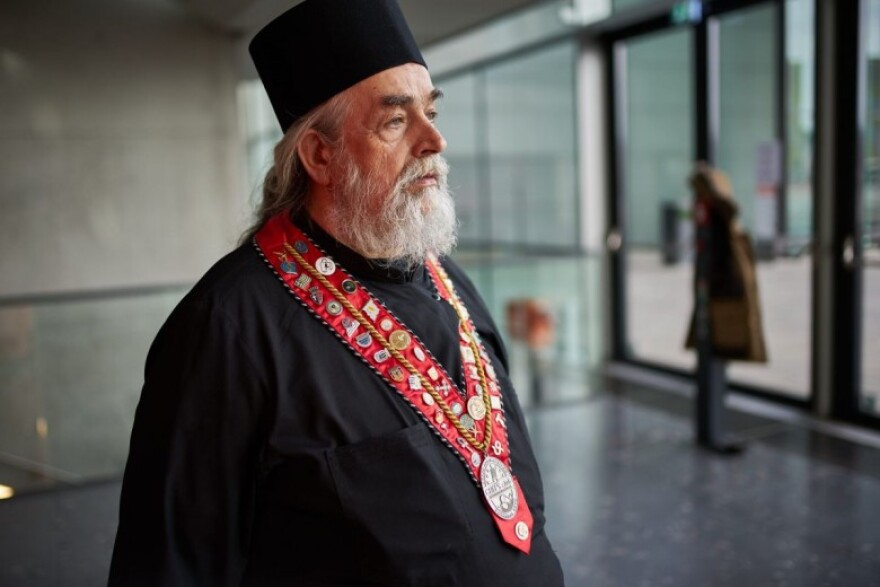 Epifanios was struck by cancer. He was happy to have his last table with the President of the Republic on the eve of October 28. After 40 days he passed away.

His work, however, remained. His legacy is proving to be more relevant than ever, at a time when diet has never been as microscopic as it is today.

Never before has the relationship of people with it been re-examined, adapted as it is today, while it is now inextricably linked as a social and political act with the environment and climate change, with the allocation of limited resources, but also with a more general bioethics. 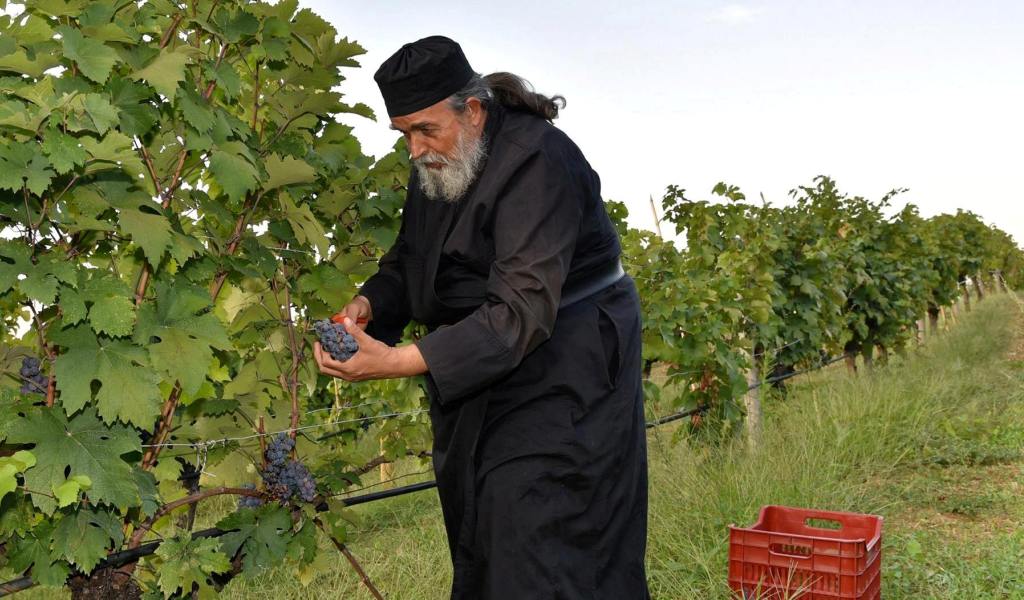 It is no coincidence that the number of those who adopt veganism is increasing exponentially.

Thus, the Mount Athos zucchini meatballs, the casserole with artichokes, soups and the traditional Mount Athos semolina halva travel around the world.

“I cook the food that our parents and ancestors prepared and ate. This is the Mount Athos cuisine, which I learned to cook for 33 years. Experts describe it as healthy, Mediterranean, dietary, vegetarian. I do not know how to call it… “.

READ MORE: “Man of God” Premieres in the USA to full cinemas.