The incredible case of the 27-year-old Albanian who pretended to be a Pakistani to reach schoolgirls through social media can be seen in the document unveiled by Proto Thema.

The student when she appealed to police at Korydallos, told them that the accused was a Pakistani, not knowing that he was actually Albanian.

He is a member of the well-known trapper group and used a fake profile on Instagram, through which he approached the student of the 2nd Lyceum, and after constant communications he persuaded her to meet him. 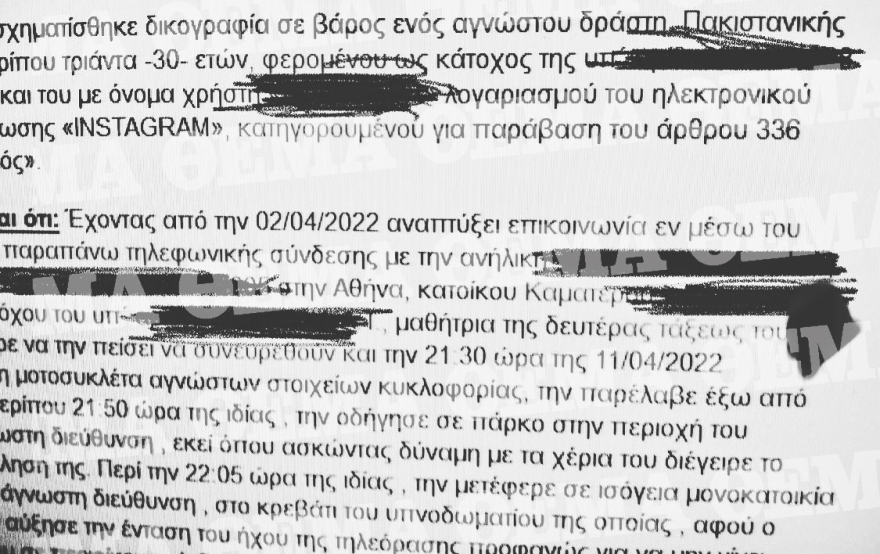 A 27-year-old Albanian who introduced himself as a Pakistani met a 17-year-old student via Instagram , dragged her to a studio in Korydallos and after turning blasting the TV volume, he raped her.

In fact, his audacity was such that after his depraved act and having left his "genetic imprint" on the girl's blouse and her body, he put her on the motorbike and returned her to her house, threatening her not to say anything.

He kissed her in the park

When a few days ago the 17-year-old student from Kamatero met through Instagram the Albanian, about 27-years-old, who appeared under a pseudonym on social media, she could not imagine the torment she would experience on the night of April 11.

The man persuaded her to meet at 9:30 p.m. outside her house for a walk.

He went and took her on a motorbike and drove her to a park in the area of ​​Korydallos where he treated her in an awkward and aggressive way, with the girl asking him to stop and return her to her house. But the Albanian had other plans.

The time was 22:10 and the perpetrator, instead of taking her to his house, led her to a ground floor apartment in the same area (the girl in her statement to Korydallos Police said that she did not remember the address, she only described the place.

He locked the door, turned on the TV so that the neighbours would not hear what was happening in the studio of Korydallos, undressed and rushed on the minor, breaking his sick instincts on her.

The horror scene lasted about half an hour. The girl resisted and with all her remaining strength begged him to stop. But in vain…

After the rape, the Albanian, and having left his genetic imprint on the 17-year-old's blouse, ordered her to get up and take her to her house.

In fact, he asked her not to talk about all the horrible things she suffered, telling her that he had recently been released from the Korydallos police station.

The girl a little while later and in a state of shock, went to the Police of Korydallos, where she reported her rape.

In fact, she gave a description of the Albanian and the profile he used on Instagram.

She was ordered to be examined by a medical examiner while her T-shirt with the biological imprint of the perpetrator was confiscated and sent to the Forensic Laboratories for analysis.

The 27-year-old was finally arrested at his home in Agia Varvara.