The missile cruiser Moskva, the flagship of the Russian Navy in the Black Sea, sank while being towed to its destination in a storm due to damage to the hull received due to a fire from the detonation of ammunition, the Russian Defence Ministry claims.

“During the towing of the Moskva cruiser to the port of destination, the ship lost its stability due to damage to the hull received during the fire from the detonation of ammunition. In the conditions of stormy seas, the ship sank,” the ministry said.

They added that, as previously reported, the crew of the cruiser was evacuated to the ships of the Black Sea Fleet in the area.

Earlier on Thursday, the Russian Defence Ministry reported that the guards missile cruiser of the Black Sea Fleet Moskva was seriously damaged as a result of the detonation of ammunition that occurred due to a fire, the crew was evacuated to the ships of the fleet in the area.

The ministry said the cause of the fire is under investigation.

However, the governor of Odesa said Ukrainian forces hit the vessel with missile strikes, while presidential adviser Oleksiy Arestovych said “we don’t understand what happened”.

The Neptune is an anti-ship missile that was recently developed by Ukraine and based on an earlier Soviet design. The launchers are mounted on trucks stationed near the coast and, according to the Washington-based Center for Strategic and International Studies, the missiles can hit targets up to 280km (175 miles) away.

The United States was not able to confirm Ukraine’s claims of striking the warship, American national security adviser Jake Sullivan said on Thursday. Still, he called it “a big blow to Russia”.

“They’ve [the Russians] had to kind of choose between two stories: One story is that it was just incompetence and the other was that they came under attack, and neither is a particular the good outcome for them,” Sullivan told the Economic Club of Washington.

The Moskva is the second major ship known to have suffered serious damage since the start of the war. Last month Ukraine said it destroyed a landing support ship, the Orsk, on the smaller Sea of Azov. 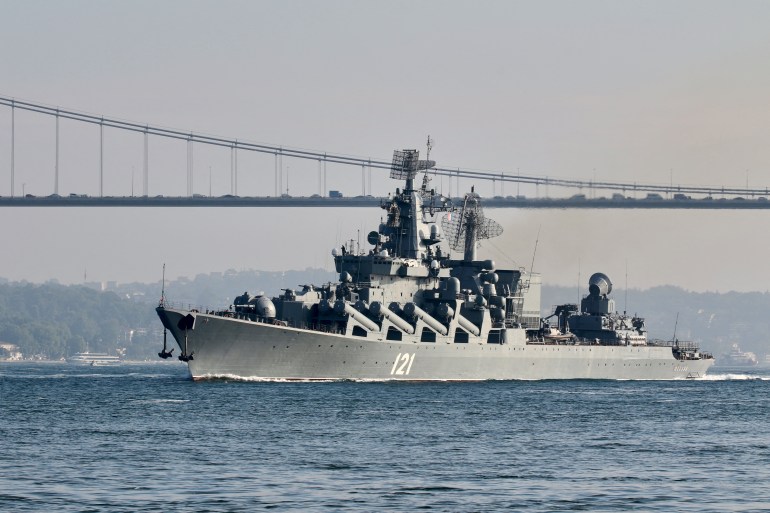 Moskva is the flagship of the Black Sea Fleet, the lead ship of Project 1164 Atlant. It was put into operation in 1983 under the name “Glory”. In 1996, the cruiser received its current name. The main strike armament of the ship is 16 P-1000 Vulkan missile launchers.

The news of the flagship’s damage overshadowed Russian claims of advances in the southern port city of Mariupol, where they have been battling the Ukrainians since the early days of the invasion in some of the heaviest fighting of the war – at a horrific cost to civilians.

Moscow’s Black Sea fleet is blockading Mariupol and is off the coast of Odesa, with its ships used to bombard coastal cities.

The Moskva gained notoriety early in the war when it called on Ukrainian border troops defending the strategic Snake Island to surrender, only to be defiantly refused. In an audio widely circulated online, a Ukraine soldier responds: “Russian warship, go [expletive] yourself.”

It was previously deployed in the Syrian conflict where it served as naval protection for the Russian forces’ Hmeimim airbase.

With the war entering its seventh week, US President Joe Biden announced an $800m military aid package for Ukraine that included helicopters and armoured personnel carriers, according to Al-Jazeera.

“Without getting into sensitive operational issues, the president did go to NATO a few weeks ago and indicate to our allies that we are looking to facilitate the supply of coastal defence and anti-ship capabilities to the Ukrainians so that they can’t be menaced from the sea. And that is being actively worked. And I’ll leave it at that,” said Sullivan.

Greece and India set to boost cooperation in agriculture, shipping, tourism and trade

Russia has no chemical weapons: Kremlin