Villagers in northern England are furious as they ‘weren’t consulted’ about ‘nightmare’ plans for a ‘Greek style’ asylum centre at an abandoned Royal Air Force base could see migrants staying in shipping containers and made subject to curfews.

According to the Daily Mail, the decision to use Linton-on-Ouse in Yorkshire – with a population of only 1,200 – comes as Prime Minister Boris Johnson prepares to unveil a new hardline immigration policy.

The policy will see asylum seekers flown 6,500 kilometres away to Rwanda to have their claims processed following a £120 million deal with the African country.

In the UK migrants will be held in ‘Greek-style reception centres’, the first of which will be built at RAF Linton-on-Ouse. 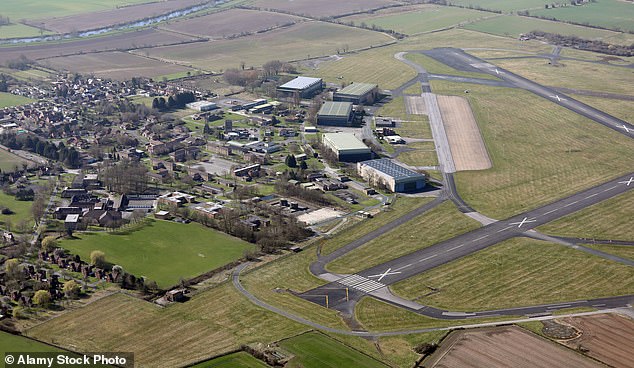 But residents in the North Yorkshire village, including the parish council, were not informed of proposals for 600 asylum seekers at RAF Linton-on-Ouse until news broke today

Pensioner Barry Morton said: ‘Upset – I am furious. We have only been living here a few month. We came from Bradford for a peaceful life – not this nonsense. 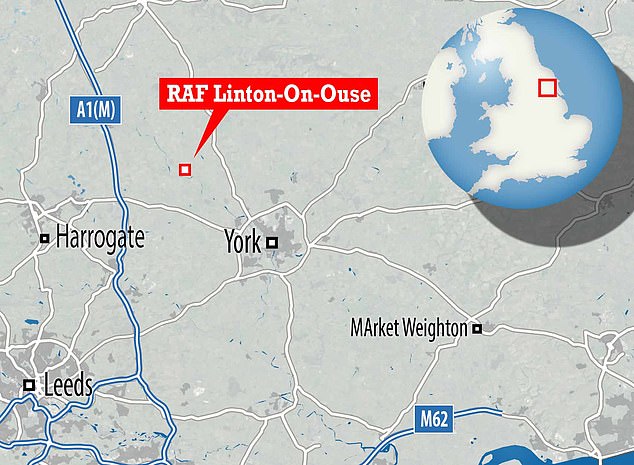 A meeting has been called on April 21 for the village to hear more about what it happening.

When the RAF base was closed two years ago, 150 MoD homes at the bottom end of the village became vacant – as well as a street outside the entrance to the site.

Villager Rachel Roberr said: ‘It is a nightmare. We came here 12 months ago for a bit of peace and quiet. So we are quite shocked. We just thought the airbase would be sold off for houses.’

and Anne Hammond, 66, added: ‘It was a bit of a shock. We are not happy about it. There will be more of them than there are villagers.

‘I am absolutely amazed they have allowed it. It is a remote area. What are they going to be doing all day if they are allowed to wander about?

‘It is a bit worrying. i live by myself. So it is a big worry and a shock.’

Under the Prime Minister’s new policy, Channel migrants will have to stick to strict rules or else they could lose their right to asylum.

Home Secretary Priti Patel is modelling the centre on Greek asylum camps where migrants undergo routine checks of their movements and have curfews.

The reception centres were first opened on the island of Samos in September last year, before a further two were completed on Leros and Kos two months later.

Each was said to have larger capacity and improved living conditions for those fleeing war-torn countries.

The Home Secretary is understood to have been impressed with the facilities in Greece during a visit last year.

She reportedly praised the ‘very different’ approach that had been taken to address the growing migrant crisis, which included digitising the asylum process.

‘If they breach the rules, it could affect their asylum claim,’ a government source told the Telegraph.

‘You would be told that you would have to be in by this time. That’s fair rules for operating if you provide food and accommodation. The Greeks have things like timings.’

The village has been left feeling ‘like a ghost town’ since the withdrawal of air force personnel over the last three years.

The RAF base has lain empty since 2020, when the Ministry of Defence announced it would no longer be actively using the site.

It was expected to be sold in the coming years, but the government has now revealed a new use for the 680-acre facility.

Accommodation for asylum seekers will be set up, while a processing centre will also be built.

Initially, it will house migrants who arrive in the UK on boats, although Thirsk and Malton’ Conservative MP Kevin Hollinrake has also proposed that the site is also opened to Ukrainian refugees fleeing the war with Russia.

In a statement, Mr Hollinrake said: ‘I have recently met with the Immigration Minister following the announcement the RAF site at Linton-on-Ouse will be used as an asylum seeker accommodation and processing centre. It forms part of increase in capacity measure to deliver more timely decisions.

‘I appreciate my constituents may have a number of questions about this site, but it is important to note these claims must be processed somewhere and in a humane and managed manner.

‘I want to assure constituents I will be working closely with the Home Office on this throughout.

‘It is crucial that those being processed are housed in suitable and appropriate settings, with recreation and social facilities to enable those individuals to live as normal a life as possible.

‘I have been assured the time limit for any asylum seekers to remain the site will be 180 days and I have ensured the Minister is clear this must be stuck to, to ensure those waiting for decisions are not unduly delayed.’

Mr Hollinrake added that he is in discussions with the government about how to minimise ‘disturbance’ to local residents in the small village.

It is anticipated that up to 300 jobs could be created on the RAF base, including ‘a number of new business opportunities in catering and other areas’.

Mr Hollinrake said: ‘There are a number of conditions I wanted to ensure were considered in advance of the site opening.

‘I have made it clear the local community must be at the heart of these plans, prioritising those in the area for any jobs which may be required at the site.’

‘I have spoken to other members of parliament who already have similar facilities in their areas. Initial concerns around disturbance to local communities has not been borne out in practice, so hopefully this will be the case here also.

‘I have also asked the Minister if he can consider opening the site up to Ukrainian refugees, given the heartwarming response from Thirsk and Malton constituents to the crisis.

‘I will keep constituents updated with any further developments.’

There are concerns about the new Rwandan immigration policy considering the country’s human rights record.

According to the campaign group Human Rights Watch, ‘arbitrary detention, ill-treatment, and torture in official and unofficial detention facilities is commonplace, and fair trial standards are routinely flouted in many sensitive political cases, in which security-related charges are often used to prosecute prominent government critics. Arbitrary detention and mistreatment of street children, sex workers and petty vendors occurs widely.’

It comes as Boris Johnson ordered the Royal Navy to police the English Channel and stop small boats from today.

The Prime Minister ordered warships to take over from the Border Force as the latest wave of arrivals from France were pictured landing in Kent.

Speaking just a few miles away he hailed the UK as a ‘beacon of openness’ before confirming an agreement with Rwanda to send boat people 4,000 miles to the east African nation – in many cases permanently.

In a speech this morning the Prime Minister invoked the spirit of Brexit as he unveiled the £120million scheme, saying: ‘The British people voted several times to control our borders.’

He said that while the UK’s compassion may be ‘endless’, its capacity to host people was not, adding: ‘We cannot expect the UK taxpayer to write a black cheque.’