A Ukrainian refugee has caught the attention of Greece after being interviewed on the beach.

With painted nails and virtually no clothing, she told MEGA:

"We cannot go back to Ukraine because we now have a war and things are complicated in my country. So I brought my mother and we are together here trying to build our lives."

More than 20,000 Ukrainians have fled to Greece so far, compared to 32,600 asylum-seekers staying in the country's camps.

Greece has promised the Ukrainian refugees work, noting that there are more than 140,000 jobs available in the agriculture sector and some 50,000 in tourism.

Two camps in Serres have been set aside for Ukrainian refugees in the north, near their point of arrival at the border with Bulgaria.

A third camp in Elefsina, near Athens, is being renovated for the same purpose, says camp manager Despina Baha.

Irene, a 39-year-old from Vinnytsia, has been living in one of the Serres camps with her two children for a fortnight. She is "impressed by the hospitality of the Greeks", she said.

"We are starting to have a normal life again. The children are going to school and already have friends," she told AFP.

Veronika Boholiubska left her city of Odessa in southwestern Ukraine with her daughter and grandchildren in early March.

She had spent almost a month in a camp in Uzhhorod, on Ukraine's border with Slovakia, before deciding to set off on her own to find a "safe country, like Greece" and prepare for the arrival of the rest of her family.

"We travelled for three days, in Romania and Bulgaria there were plenty of refugees, then I saw on Facebook that Greece was taking in refugees and that access was free," says the 50-year-old, who arrived at the Elefsina camp with three small bags.

More than 11 million people are believed to have fled their homes in Ukraine since the conflict began, according to the United Nations.

As well as the 5.3 million who have left for neighbouring countries, another 6.5 million people are thought to be displaced inside the war-torn country itself.

The UN's 6.5 million figure is based on research carried out by the International Organisation for Migration (IOM) between 9 and 16 March.

The actual total is likely to have increased in the subsequent weeks.

Of the 2,000 internally displaced people the IOM surveyed:

The IOM estimates that more than half of the people who are internally displaced are women, and many are deemed particularly vulnerable because they are pregnant, have a disability or are a victim of violence.

The UN, which is working alongside other organisations to provide help to people in Ukraine, says it is offering humanitarian assistance "wherever necessary and possible". This includes:

About 12 million people are also thought to be stranded or unable to leave areas affected by the fighting.

Where are Ukraine's refugees going?

Refugees are also crossing to neighbouring countries to the west, mostly Poland. 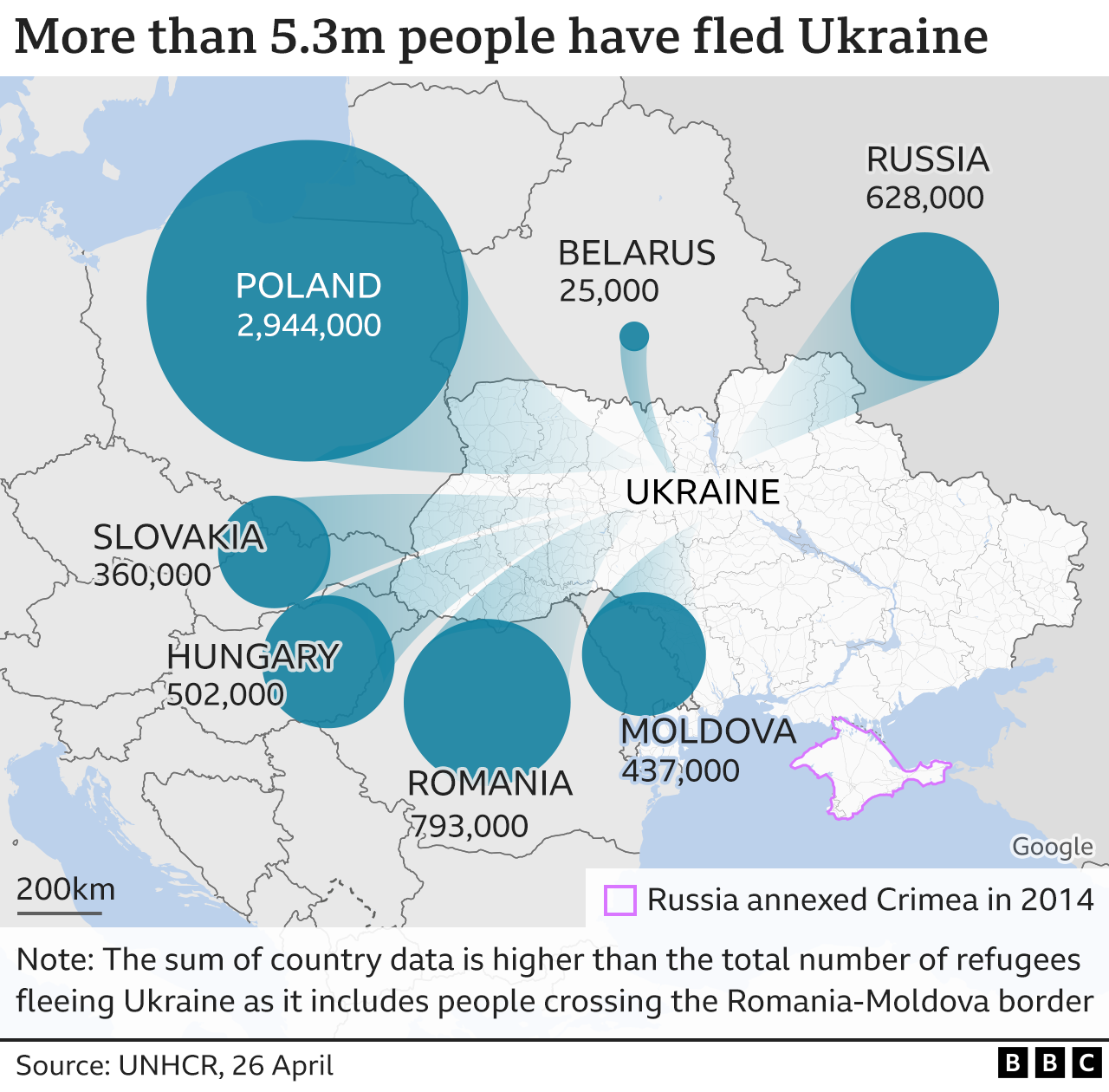 The UN says that as of 26 April, more than 5.3 million people have left Ukraine:

Some people have travelled from Moldova into Romania and so are included in both countries' totals.

Poland, Hungary and Slovakia are part of the Schengen area, where there are no internal border controls.

This means many of those counted when they initially crossed into these countries may have since travelled to other countries.

For instance the Czech Republic's interior ministry said that as of 26 April, it had granted 312,800 emergency visas to Ukrainian refugees.

The EU has granted Ukrainians who flee the war a blanket right to stay and work throughout its 27 member nations for up to three years.

They will also receive social welfare and access to housing, medical treatment and schools.

The size of Greek ...manhood, compared to others