Stefanos Tsitsipas was once again targeted by Twitter users who were outraged at one of his posts.

The leading Greek tennis player and one of the best in the world provoked reactions when he tweeted: "Your salary is the bribe they give you to forget your aspirations."

The reactions and negative comments from his followers started to rain.

Your salary is the bribe they give you to forget your aspirations.

A few hours after his tweet, the first reactions started from users of the popular social networking platform. Most referred to his own work and threw their arrows at his salary.

Still others stressed that he would never have to work eight hours a day in his life, while advising him to think more before writing something.

Typical is the question of a follower who asked him if he hit his head on a racket while another wondered "why does he continue and do this?"

"Celebrities should not give advice to everyday people. You are so disconnected from reality that we go through every day. Do you think that everyone can afford to leave a job that they do not like? No. This is our reality," wrote another user.

Check out the tweets 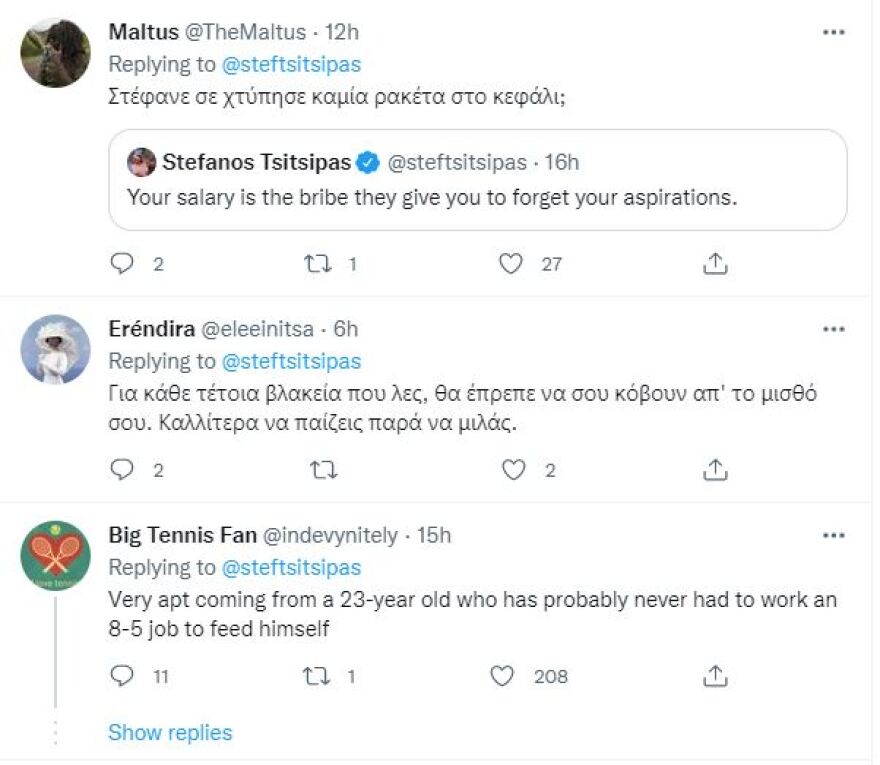 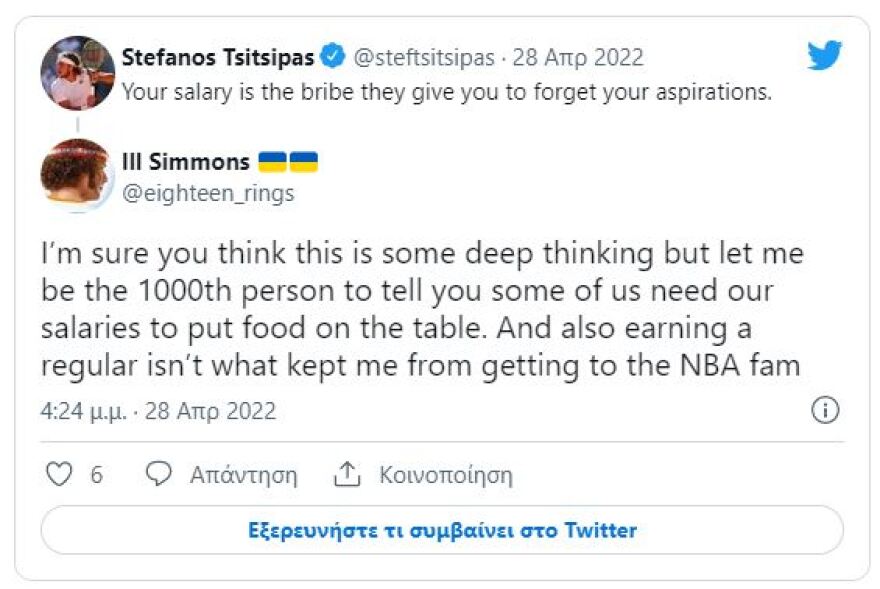 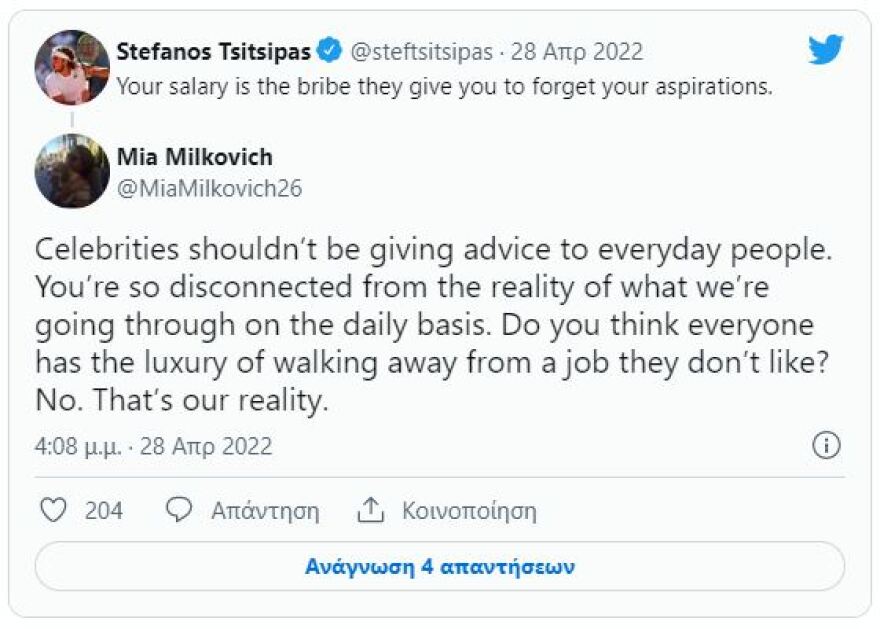 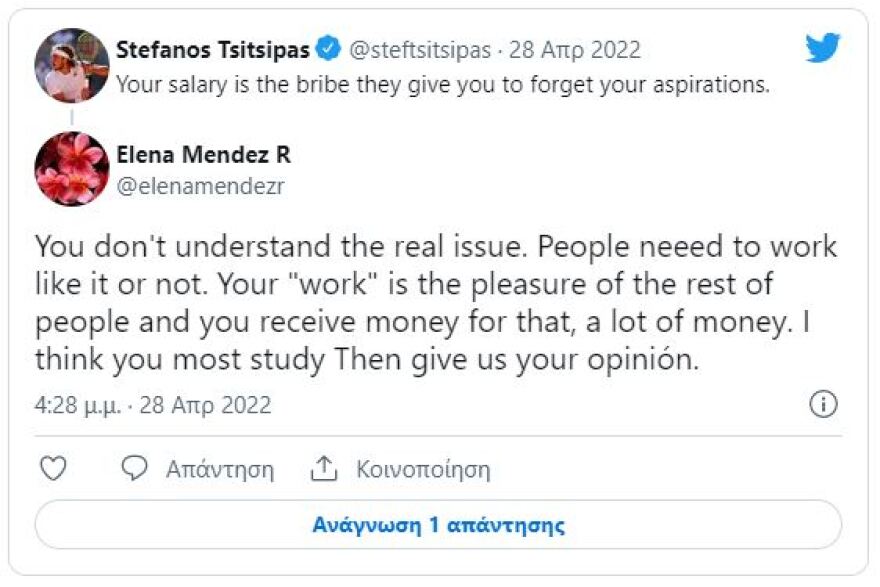 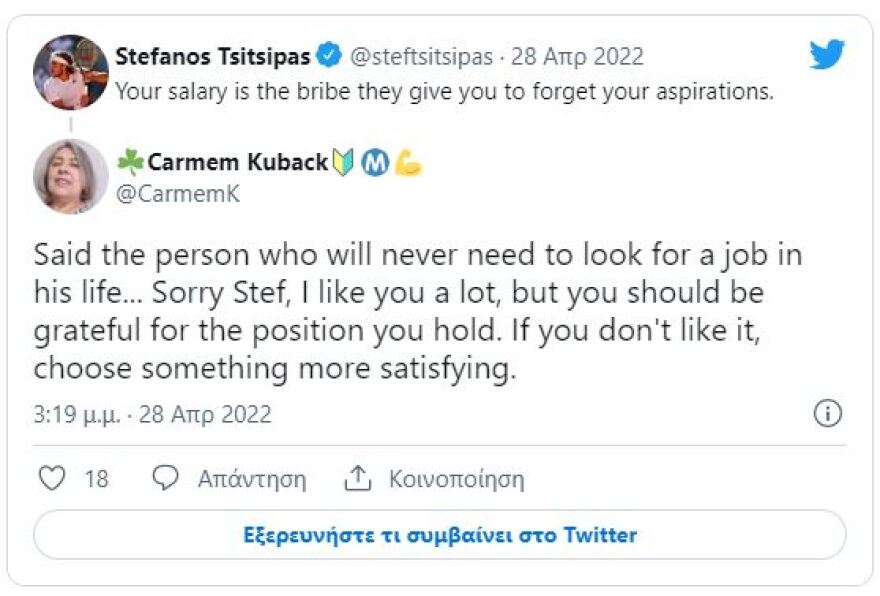 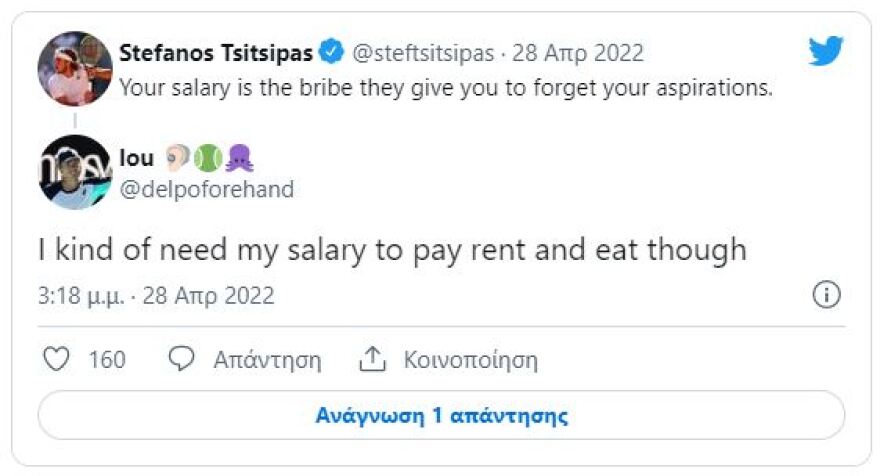 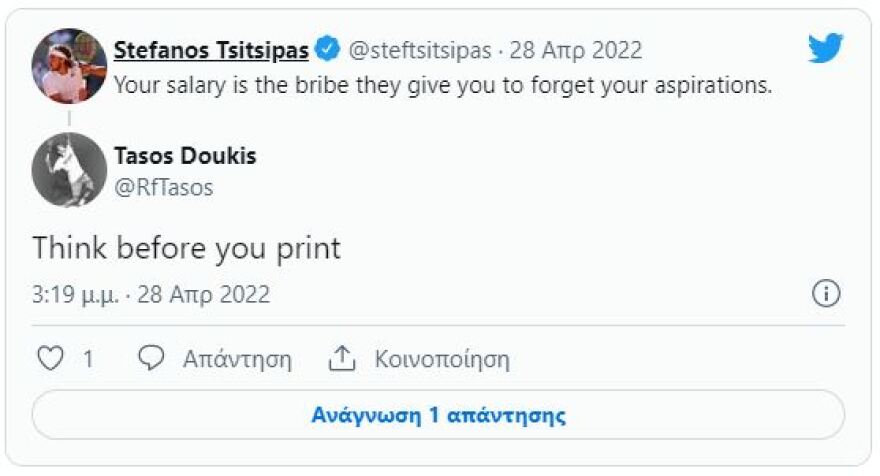 Meanwhile, there was a flashpoint at the end of the first set in the quarter-final meeting between Carlos Alcaraz and Stefanos Tsitspas at the Barcelona Open as the world No. 5 hit the ball towards his opponent at the net.

Alcaraz, who won the match in three sets and went on to win the title, stared at his opponent afterwards and two-time French Open finalist Alex Corretja has given his view on the incident.

“I was very surprised to see Alcaraz dictating so much against Tsitsipas. Someone who just won Monte Carlo and is usually very aggressive, but he struggled so much on the backhand side and from Stefanos’ point of view you can see he was desperate, that’s why on that ball he ran and he was just trying to hit as hard as he could to probably just to tell the guy ‘OK, leave me alone, you’re pushing me so much’."

“And it was, I think, sort of like a desperate reaction from Stefanos. And I also liked a lot the way Alcaraz behaved at that moment because he looked at him like ‘OK, no fear, I’m not scared of you, I’m beating you and that’s what I’m doing with my tactics’. He mixed it up very well. He showed a lot of personality and at the same time he was brave and ready to fight.”

READ MORE: Heartwarming moment as ballgirl is starstruck by Stefanos Tsitsipas and can’t wipe away the giant grin from her face.

40th Marathon Peace March to be held on May 22

Ikaria into the Blue Zone The Secrets To “Immortality”