Greece unequivocally condemned and deplored the Russian army's looting of ancient Scythian artifacts from the Melitopol Museum, noting that this was "not the first time that Russia has treated works of art in this way".

"It is truly painful to watch, in addition to the tragic hours experienced by the citizens of Ukraine due to the Russian invasion, the heinous looting of Scythian artifacts from the Melitopol Museum," said Greek Culture Minister Lina Mendoni on Monday. 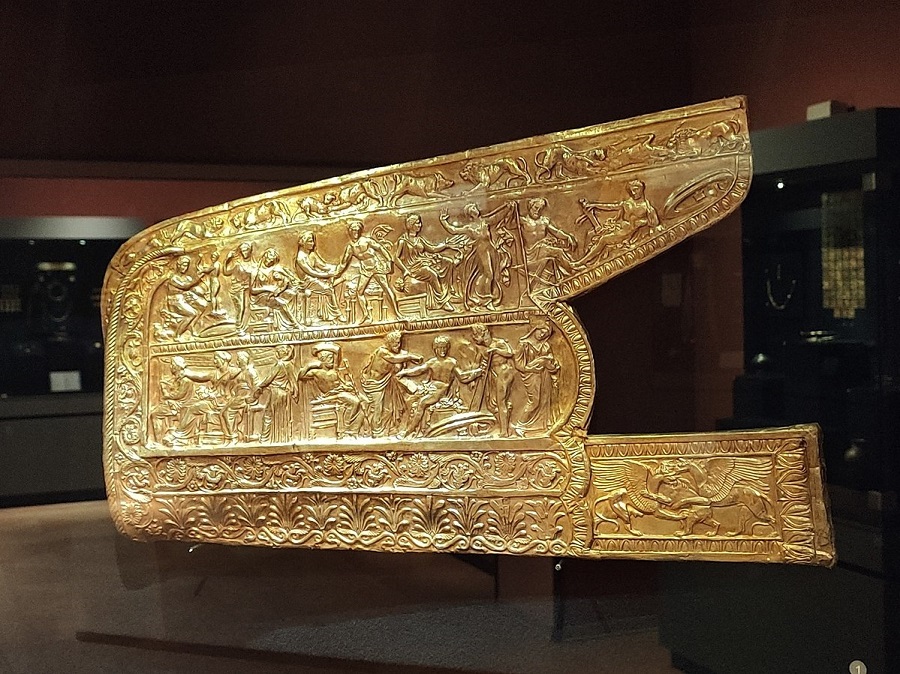 "It is sad that the barbarity of war is demonstrated with attacks on museums and all that expresses human thought and culture," she continued.

"This is not, however, the first time that Russia has treated works of art in this way. For decades after the fall of the Nazi regime, Priam's Treasure from the Schliemann excavation was taken to Russia, to be revealed many years later, in 1993, in the Pushkin Museum.

"We unequivocally condemn these actions.

"Already, at the last Council of Culture Ministers of the European Union, in Luxembourg, we asked for measures to protect the cultural heritage of Ukraine, specifically the creation of a Red List to prevent their illegal trade and the creation of a platform to collect information on looting and theft of cultural goods, as well as the launch of initiatives for taking ad hoc legal and legislative measures to protect the cultural heritage of Ukraine. Taking such measures is now urgent, as well as essential," Mendoni concluded.

According to Ukrainian officials quoted by the New York Times, more than 250 cultural centres have been damaged or destroyed and thousands of objects have been looted since Russia began its invasion of Ukraine on February 24.

Mariupol city council officials announced via Telegram this week that Russian forces had stolen “more than 2,000 unique exhibits” from the besieged city’s museums.

Items include a “unique Torah manuscript” and a “Gospel from 1811 created by the Venetian printing house for the Greeks of Mariupol.”

“The city council of Mariupol is preparing the necessary material to initiate criminal proceedings and to appeal to Interpol,” said the municipal officials of Mariupol.

Elsewhere, humanitarian organisations worked to evacuate more civilians from the devastated Ukrainian port city of Mariupol on Monday but hundreds of people remained trapped in the Azovstal steel works, the last stronghold of resistance to the Russian siege.

A first group of evacuees was due to arrive in a Ukrainian-held town northwest of Mariupol on Monday morning. But Russian forces had resumed shelling the steel works on Sunday as soon as the buses had left the plant, a city official said on Monday.

People still stuck there were running out of water, food and medicine as Russian forces hemmed them into the industrial complex, whose network of bunkers and tunnels has provided shelter from weeks of Russian bombardment.

On the international front, energy ministers from EU countries were due to hold emergency talks to plan a response to Moscow’s demand that European buyers pay for Russian gas in rubles or face their supply being cut off.

While the EU has imposed heavy economic sanctions on Russia in response to its invasion of Ukraine, the issue of Russian energy supplies has posed a dilemma that threatens to crack the united front.

Russian President Vladimir Putin’s forces are now in control of nearly all the city, linking up Russian-held territory to the west and east.

Around 100 civilians evacuated from the Azovstal steelworks were due to arrive in the Ukrainian-held city of Zaporizhzhia, 230 km northwest of Mariupol, on Monday morning.

“For the first time, we had two days of a ceasefire on this territory, and we managed to take out more than 100 civilians – women, children,” President Volodymyr Zelensky said in a nightly video address.

READ MORE: Zelensky: Azov Battalion are professional soldiers, I will visit Athens after we win the war.