The average Greek needs the savings of 12 to 14 years of work to buy a 100 sq.m. house. Greece tops all European Union countries in difficulty in obtaining a residence, along with Ireland, where even more years of work and savings are needed.

Although in most of the EU, it takes “half an effort” (6-8 years), the issue of the difficulty of obtaining housing for households has reached the concerns of the finance ministers and has entered the agenda of the Eurogroup.

For the first time, the problem may be considered as a whole, not only as a risk of a “bubble” in the economy or how much it costs to buy a house compared to rent, but also based on how many years one needs to work with current wages to buy a home.

A pan-European solution is now being sought, as along with all the issues of pandemic, war and austerity, the debate over how to deal with housing is now under way.

Despite an atmosphere of war in Europe, a first attempt has been made to record and approximate the housing reality for each country, and a map has explained all the details.

The map shows that only two countries in the EU are “painted” entirely in dark colours: Ireland and Greece, because the acquisition of a 100 sq.m. house requires income over 12 years of work. 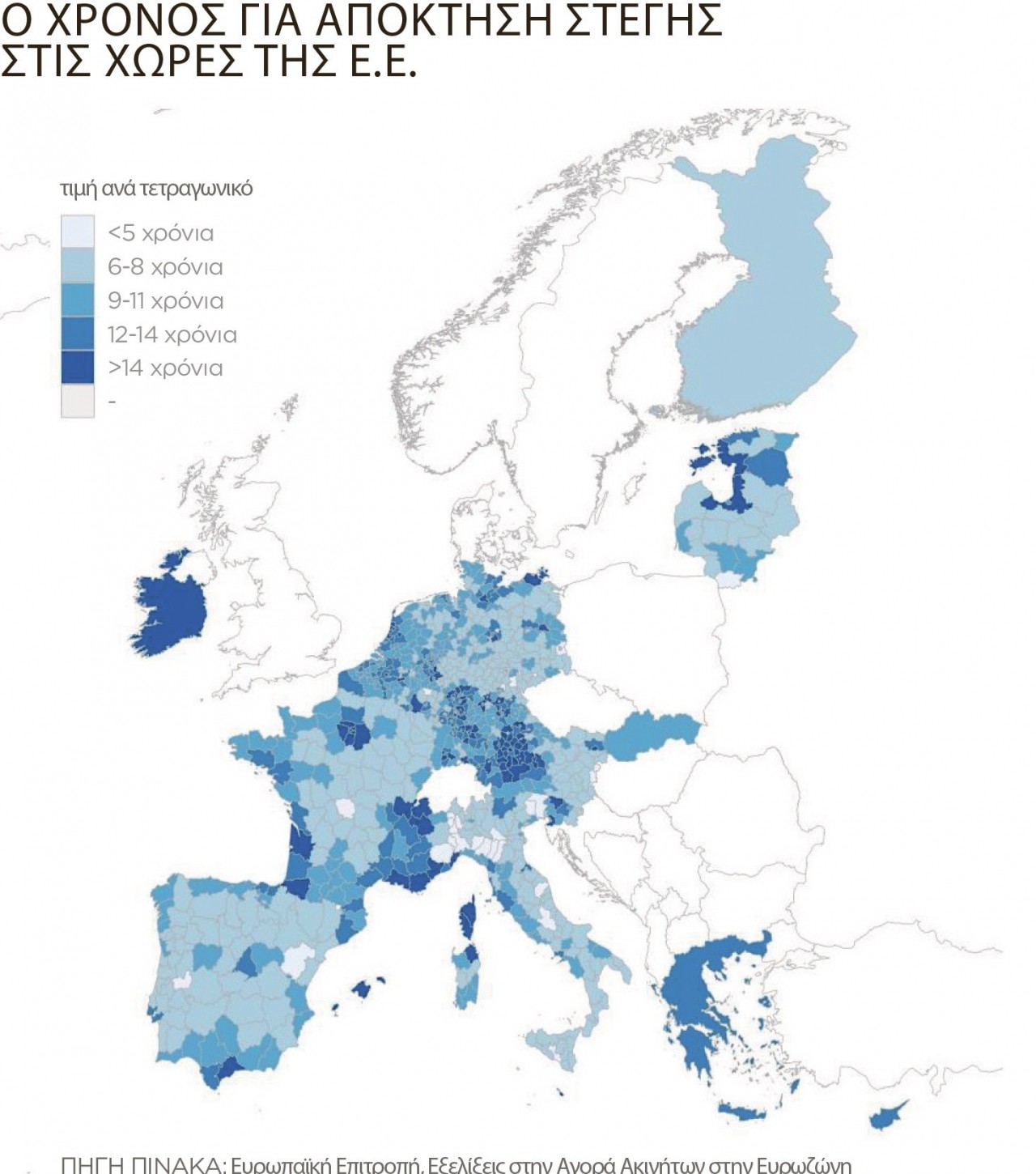 Only a few individual areas or zones in Europe show a similar picture (eg Corsica), but in no other country, not even in the former East, do people need a total of more than 10 years of work to buy a home.

Plan for prices to fall

Greece also has one of the highest percentages of home ownership around 70%. Higher percentages, over 80%, show countries of the former Eastern bloc (Poland, Croatia, Romania, Bulgaria, Slovakia, Hungary, etc.).

“The E9 real estate declarations in Greece exceed the E1 income tax declarations”, they say in the Ministry of Finance (8.8 million E9, against 6.5 million E1).

However, they acknowledge that this does not mean that households meet their housing needs.

This is also evident from the fact that, although real estate market prices are soaring, construction activity in 2021 jumped 45% in one year (!) with trends for further increase in the construction of new buildings in 2022.

As the Eurogroup discusses how to make housing more affordable for Europeans, in our country the financial staff is developing a new housing policy with an emphasis on young couples, utilising innovative tools and opportunities.

However, in order for prices to fall in the short term (within the next 3-4 years) in our country, the government considers that the supply of real estate must increase.

To make this happen, initiatives will be taken at all levels, with the development of state-owned real estate, with incentives for renovation, and the offer of urban land in the future.

Specifically, as they estimate, in Greece there are at least five sources of unused properties that are not used and could increase their offer very soon.

Areas that the government considers to be able to welcome large investments in the first phase are the following:

READ MORE: Greek Tourism Minister: Our aim is to extend season till December.

Only a quarter of CPEC projects in Gwadar completed

Bloomberg: Americans are leaving and moving permanently to Greece and Europe

MYKONOS: The big “branded” property in Agrari is up for auction (PHOTOS)

Bank of Greece: Apartment prices in Athens increased by 9.7% in 2022