The madness and nonsense on Mykonos continues to reveal itself in the fine print of ads posted on the internet.

Half of the ads are about finding housing, since several employees in Mykonos have not been able to find accommodation at reasonable prices.

READ MORE: Mykonos landlord demands €21,000 in rent from employees for a small studio during the tourist season.

The other half have to do with tourism businesses that are unable to find employees for the exact same reason.

But there are some ads that stand out like no others… especially for those who want to work at a leisurely pace, with a satisfactory salary and all expenses paid, combining what we call “business and pleasure”.

And when we refer to work, do not imagine something that requires special knowledge, but simple things like outdoor work…

For example, the ad that was posted yesterday morning was about dog care. 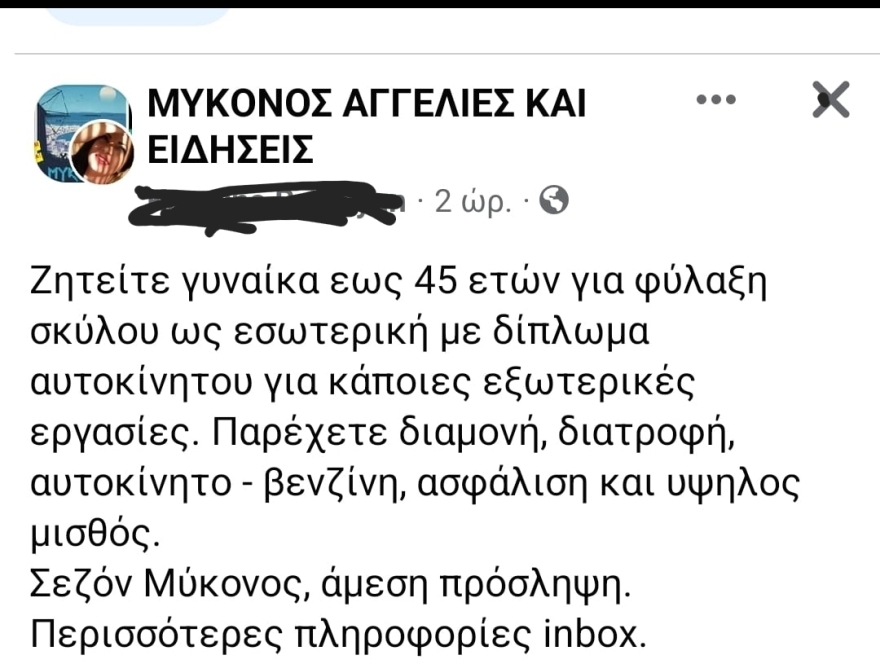 The person who posted the ad asked for a woman up to 45 years old with a car license to take care of an indoor dog with accommodation, food, car petrol, insurance and a high salary provided.

According to Proto Thema, the salary was €1000 “net” and the babysitter for a dog was found in zero time from the moment the ad was posted.

READ MORE: Mykonos: €500 for a beach sofa in Panormos.

Elsewhere, Saudi Arabian Airlines (SAUDIA), the national flag carrier of the Kingdom of Saudi Arabia, recently announced that it will begin new direct flights to the Greek island of Mykonos starting July 1.

The service will be operated with a state-of-the-art Airbus A320 aircraft, in a two-class configuration with 20 seats in Business Class and 90 seats in Guest Class.

The addition of the new summer route to Mykonos is part of SAUDIA’s growth strategy focusing on expanding its network and fleet, increasing existing frequencies and destinations globally, while adding new aircraft – narrow and wide-bodies to its existing 144-strong fleet.

According to the airline, additional new seasonal summer flight routes will be announced soon.

READ MORE: MYKONOS: Another complaint about the living conditions for workers – “Rooms with mold and cockroaches.”