Babis Anagnostopoulos, the Greek helicopter pilot who allegedly murdered his young British wife, told an Athens court on Wednesday that his ‘priority was her happiness’ and cried that he had ‘no words or excuses’ for why he killed her.

Not only did he allegedly murder Caroline Crouch, 20, but also hanged her dog Roxy and then maintained a charade that the crimes were committed during a botched burglary.

He also pledged that he would describe his crime to the court ‘in every detail’, adding that all he can think about is how he will ‘never see Caroline again’, something the prosecutor was quick to remind was because of his own actions.

Giving evidence at his trial, he said, according to Daily Mail: ‘There are no excuses for what happened a year ago. Not to myself, not to anyone. What was lost a year ago is irreplaceable.

‘She (Caroline) didn’t deserve what happened, our dog didn’t deserve it or anyone else. The word “sorry” is not enough. No matter how many times I tell her now that I’m sorry she won’t enjoy her life.’ 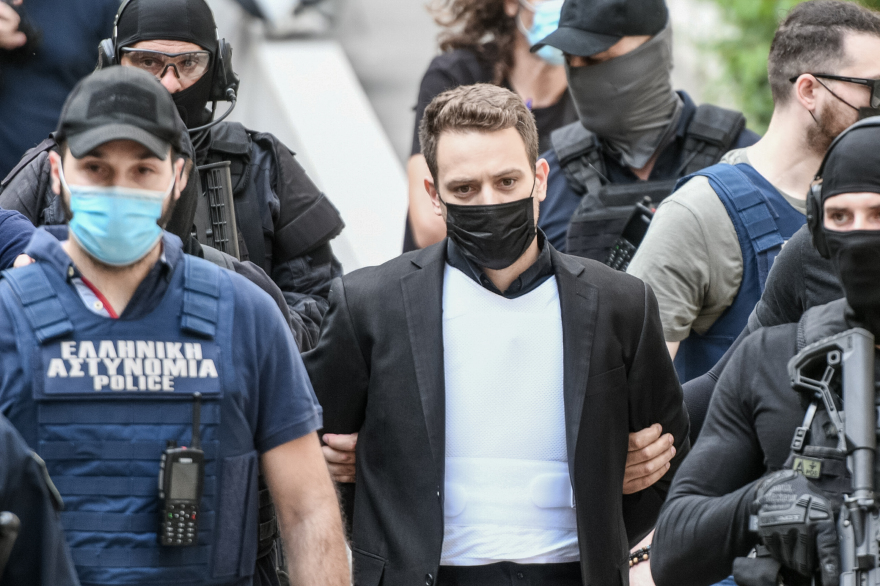 Anagnostopoulos does not deny killing Caroline but insists that it was not ‘premeditated’ and that it was a ‘crime of passion’ caused by her behaviour.

In addition to her murder Anagnostopoulos is also on trial for the murder of Roxy and two counts of attempting to pervert the course of justice. Following the killings, he concocted an elaborate ruse that they were the result of a botched burglary last May.

The court has already heard graphic details about how police discovered Roxy’s torso hanging from a bannister and the couple’s 11-month-old baby Lydia next to her dead mother after they entered their home in an Athens suburb.

Anagnostopoulos told the court: ‘No matter how many times I say sorry to our child for not growing up next to her mother or to my mother-in-law for trusting me, it makes no difference. There are no words.

‘I will tell you exactly what happened in every detail and honestly. It will not be an excuse, I am not trying to rationalize anything from that day.

‘I’m not interested in my career or being cursed by a large number of people who have not met me, only that I will never see her (Caroline) again. 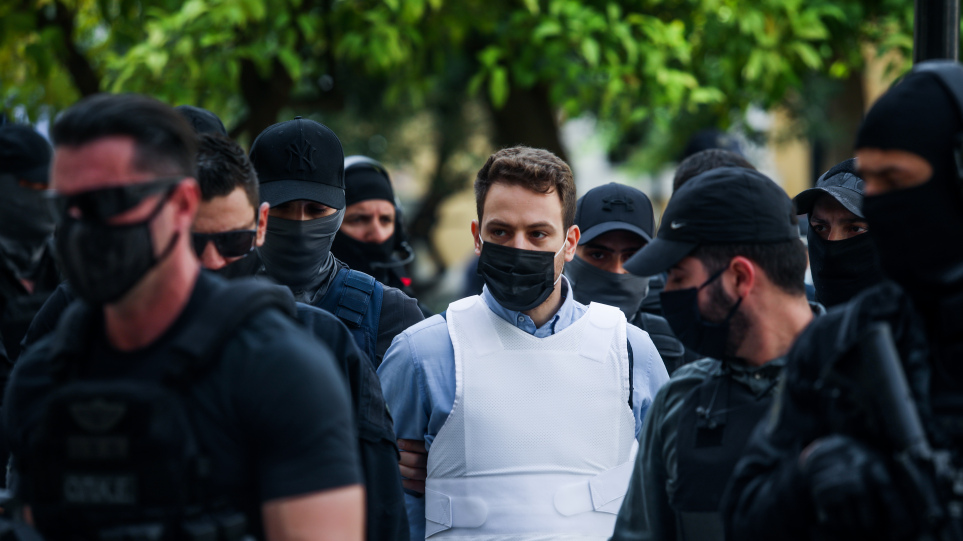 Ironically, Anagnostopoulos was giving evidence on the one-year anniversary of Caroline’s killing.

Recalling the start of his and Caroline’s sexual relationship, when she was 16 and he was 29 Anagnostopoulos told how they met on the island of Alonissos.

The court has already heard how she was 15 when they first met, when he was working as a helicopter pilot and would fly over the school she was attending to impress her.

He said: ‘My life changed in 2017 when I saw Caroline. We met at Easter. It was platonic, I was disappointed when I found out her age. I went back to the island in the summer.

‘She is the rarest person I have ever met in my life. A brilliant woman. At 16 you could speak with her about anything. Her personality was lovely. She filled anyone with love.’

As his voice quivered, he told a panel of three judges and four jurors: ‘We spent the whole summer together. After that it was obvious to both of us that we were in a relationship. Despite the practical problems, that she was on the island and I was in Athens.’

He added: ‘During the four years we were together, Caroline never called me by my name. She only called me “darling” or “little one”. No one can tell me otherwise; it was the rarest and most beautiful thing I have ever felt.’

Anagnostopoulos said that despite ‘issues’ in their relationship ‘if I could turn back time, I’d choose Caroline again.’

The Greek prosecutor hit back: ‘The problem is you can’t do that.’

Anagnostopoulos was asked in court about why he and Caroline went to Portugal to get married in 2018 without informing her parents.

‘She had a dream of getting married on a beach. But in Greece this is not legally possible, you need a church. So, we went to Portugal. We both knew it was early. We were madly in love.

‘She organised everything perfectly. Even the flowers, the cars, the hotels… everything.

‘My absolute priority in everything was her happiness. We were looking for a beautiful house that framed the dream we were living. Caroline loved this particular house. We did not want to live in the city.’

Asked why Caroline’s parents or wider family were not informed he responded: ‘We planned to make the summer trip to Portugal, get married and announce it when we get back.’

Anagnostopoulos was asked in court when problems between him and Caroline started to arise.

He said: ‘When we found out she was pregnant with her first child it was a big shock. It was too soon to have a child. Not only because of her age but also because we hadn’t had much time living together. And this had a big effect on our relationship.

‘We knew a pregnancy would happen at some point, but this was too soon. We were afraid of how the child would change our plans, our trips and Caroline studies.’

The court has already heard how the Caroline suffered a miscarriage before going on to give birth to Lydia.

Anagnostopoulos claims that this affected her mental health, causing Caroline to become angrier and more argumentative.

But number of expert witnesses have testified that the loss of her first child did not affect her attitude towards Anagnostopoulos.

They claimed that Caroline had expressed a desire to leave him because she felt ‘suffocated’ and ‘trapped’ by his controlling behaviour and because he prevented her from pursuing further studies to become a pastry chef.

‘I was devastated, we were both devastated. We were crying as we were falling asleep and hugging as we shed tears.’

He added: ‘In some moments Caroline would burst out. I could tell she wasn’t herself when she was attacking me, either verbally or physically. I didn’t mind her taking it out on me, I understood her.’

Yesterday, excerpts of Caroline’s diary – in which she detailed the couple’s troubled relationship – were read out in court.

In the entries it was revealed that Caroline told him she wanted to end their relationship in July 2020, when their baby was a month old.

Anagnostopoulos broke down in tears and had to be comforted by his lawyer as the court heard Caroline also admitted that she wanted to leave before she fell pregnant but changed her mind, saying: ‘I didn’t want my daughter to grow up without her parents’.

The heartbreaking entries also told of bitter fights between the pair, with Caroline recalling one where she ‘hit him’ before he ‘broke down a door’.

One entry read by the judge stated: ‘I fought with Babi again. This time it was serious.

‘I hit him, I cursed at him and he broke down the door.

‘All I wanted was for him to ask how I am when I woke up. I woke up so weak and tired.’

It was at this point that the pilot started sobbing. Ironically, he appeared unmoved earlier during the hearing when Caroline’s autopsy was read to the court.

It revealed that she was smothered for five minutes by Anagnostopoulos and died ‘in agony.’ Her official cause of death was given as asphyxiation.

After the hearing, Thanasis Harmanis, the lawyer for the Crouch family said: ‘Babis’s crocodile tears just underline how heartless he is and are an insult to the memory of Caroline.

‘He weeps when he hears about him being attacked by Caroline but does not shed a single tear after horrible details about her death are revealed. This is why her parents didn’t want to be at the case because they don’t want to be confronted by this charade.’

Earlier, a psychiatrist told the Athens court where the Greek helicopter pilot is on trial that the defendant exhibits signs of both narcissistic and anti-social personality disorders.

The expert witness, Alkistis Igoumenaki, testified yesterday morning that Anagnostopoulos had a ‘psychopathic personality’ and a ‘lack of empathy’ for his 20-year-old spouse and their young daughter Lydia.

Igoumenaki said: ‘[The defendant] has an absence of sentiment and empathy, but his mind is perfectly capable of understanding the wrongdoing he has done.

‘He suffers from a number of anti-social behaviour traits and is also a narcissist. But that is not an excuse for saying that he was not in control when he carried out his crimes.

The psychiatrist continued: ‘He killed his wife and the mother of his child without thinking how much the child would suffer from this loss, so the lack of empathy concerns the child as well.

‘We see a man who does not think about the baby… All this contributes to a psychopathic personality.’

Anagnostopoulos faces a possible 30-year sentence if convicted of murder at the Athens Mixed Jury court, where his case is being heard before three full-time judges and four jurors.

Igoumenaki later claimed that Anagnostopoulos’ personality meant he was unable to deal with rejection and posited he wanted to be ‘admired’ when he entered into a relationship with a much younger woman, highlighting the 13-year age gap between Caroline and her killer.

‘We see a quest for the admiration of others… Most of us in the world have experienced rejection and we know that emotion is bad. But fortunately this does not lead to murders,’ the psychiatrist decalared.

The court has already heard how Caroline expressed a desire to leave Anagnostopoulos because she felt ‘suffocated’ and ‘trapped’ by his controlling behaviour.

Eleni Mylonopoulou, who was providing couples counselling said at an earlier hearing: ‘The moment Babis would leave the room Caroline would tell me that she wanted to leave their marital home, take the baby and start all over again.

‘She felt controlled, suffocated and trapped by him. She wanted to go back to university and become a pastry chef. But he didn’t give her any freedom and she had no choice in how she lived her life.’

She added: ‘On paper, Caroline was in love with the idea of Babis but hated the person who he really was.’

Murderer of Caroline Crouch said after prison beating: “There is a death contract against me”