The Jewish Museum of Greece (JMG) inaugurated the “Stone Routes – Stories from Stone: Jewish Inscriptions in Greece” exhibition on Tuesday.

The exhibition presents, for the first time, archaeological findings that document the presence of Jews in Greece since the end of the 4th century.

The inauguration of the exhibition in the Jewish Museum of Greece and then at the Epigraphic Museum, was held in the presence of Culture Minister Lina Mendoni, who addressed a short greeting, as well as the Ambassador of the Federal Republic of Germany, Dr. Ernst Reichel.

The exhibition, supported by the culture ministry, the foreign ministry of the Federal Republic of Germany and the Hellenic-German Fund for the Future, is characterised by an innovative dual structure and originality.

The first and main part is presented at the Epigraphic Museum, which houses unique Jewish epigraphic items from the collections of museums and services of the culture ministry.

With the help of surveillance and digital material, all aspects of the social, religious, political and cultural life of the Jews and their local communities in Athens, Mystras and throughout Greece from antiquity to Ottoman rule are presented.

The second part is presented at the Jewish Museum entitled “Art of Memory and Remembrance.” It is curated by Victor Cohen and combines the past with the present through the “dialogue” of 10 ancient inscriptions and objects with an equal number of works of contemporary art.

Opening the exhibition, the Director of EME, Ms. Zanet Battinou, stated that “the exhibition is the culmination of many years of work and aims to highlight and promote selected historical and archaeological evidence of the Jews of Greece, from the end of the 4th BCE to the 15th century, while referring to the art exhibition “Art of Memory and Remembrance.”

She added that, “it is an attempt to communicate with the specific remnants of a world that no longer exists and proposes a new reading of archaeological material, through the modern look of the world of fine and applied arts”.

EME’s President, Mr. Makis Matsas, taking the floor afterwards, excitedly confessed that “today, with this exhibition, an old dream of mine is being fulfilled”.

He continued by emphasizing that the exhibition is inspired by the many years of research for the creation of the “Constitution of Jewish and Jewish Inscriptions from Mainland and Island Greece” which was envisioned by the Director of the Museum and which after 20 years of hard work was delivered in 2018 to the world public.

And he concluded that “the exhibition has a very significant value because, on the one hand, it documents the existence and presence of Jews in Greece since the end of the 4th century BCE, thus highlighting the Jewish element in Greece as one of the oldest Jewish communities in Europe, but at the same time highlighting the multicultural past of our homeland, Greece “.

Matsas also expressed his gratitude to the Minister and the services of the Ministry of Culture and the Epigraphic Museum for the preparation and lending of valuable archaeological material, but also for the firm and continuous support.

The Minister of Culture and Sports, Lina Mendoni, characterized the inscriptions as “talking stones”, that is, the most direct presumption of historicity of a place and the body that bears the language and writes it. According to the Minister, “the greatest importance of this exhibition lies in the fact that it historically demonstrates that diversity not only does not hinder coexistence but on the contrary, it is an enriching factor that broadens the foundations, strengthens the adaptability of society and ultimately increases cohesion and authenticity.” 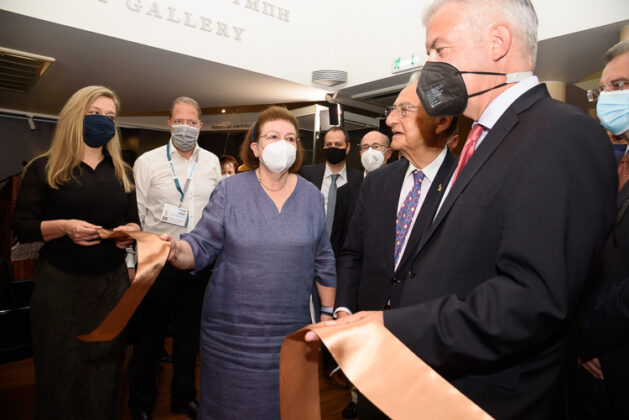 The Minister also stressed the special interest of the exhibition from a museological point of view “as it is characterized by a dual structure in conception, the first of unique historical Jewish significance that sheds light on the manifestations of the religious, political, social and cultural life of Jews and their local communities from antiquity to Ottoman times and the second which offers a polyphonic narrative and an interactive relationship with the past”.

On his part, the Ambassador of the Federal Republic of Germany, Dr. Reichel said that: “it is my pleasure to launch these periodic exhibitions with you. They remind us that the Jews have been an integral part of European history since ancient times.” “Last year, the Federal Republic of Germany celebrated 1,700 years of recorded Jewish history in the country, emphasising its importance through the centuries and contrasting it with anti-Semitic narratives. “The exhibitions we are launching today are in line with this effort. That is why I am very happy and proud that this demanding project was implemented under very adverse conditions due to the current situation with the funding of the German Federal Ministry of Foreign Affairs from the resources of the Hellenic-German Fund for the Future”.

Last but not least, the Director of the Epigraphic Museum, Dr. Athanasios Themos referred to the collaboration between the two museums, saying that “this collaboration has another dimension, that of the visitor’s diving into historical time and emerging in modern art through ancient monuments”, while he added that “this exhibition is in essence about multiculturalism”.