Yesterday's historic speech by Kyriakos Mitsotakis in US Congress has occupied the attention of Turkish media, with the front pages commenting in its entirety on the visit of the Greek Prime Minister to Washington and the warm welcome from American President Joe Biden.

Turkish media reported that "Mitsotakis was applauded for his statements against Turkey in Congress" and characterise the Prime Minister's report on Cyprus as a scandal.

At the same time, they refer to the meeting that the Greek Prime Minister had with the American President, where Mitsotakis put on the table all the details which concern the intensifying Turkish provocation and flights over inhabited Greek islands.

In fact, to show the extent of Ankara's threats, Mitsotakis showed the American president the map of Turkey's so-called "Blue Homeland", a fact that is noted on almost all Turkish headlines.

"Greek Prime Minister Kyriakos Mitsotakis addressed the US Congress after his contacts in the White House during his visit to the US," writes Yeni Şafak.

"Mitsotakis, who openly ignored the Turkish presence in the region and said that the solution of two states in Cyprus is 'unacceptable', was applauded by the members", writes Yeni Şafak. 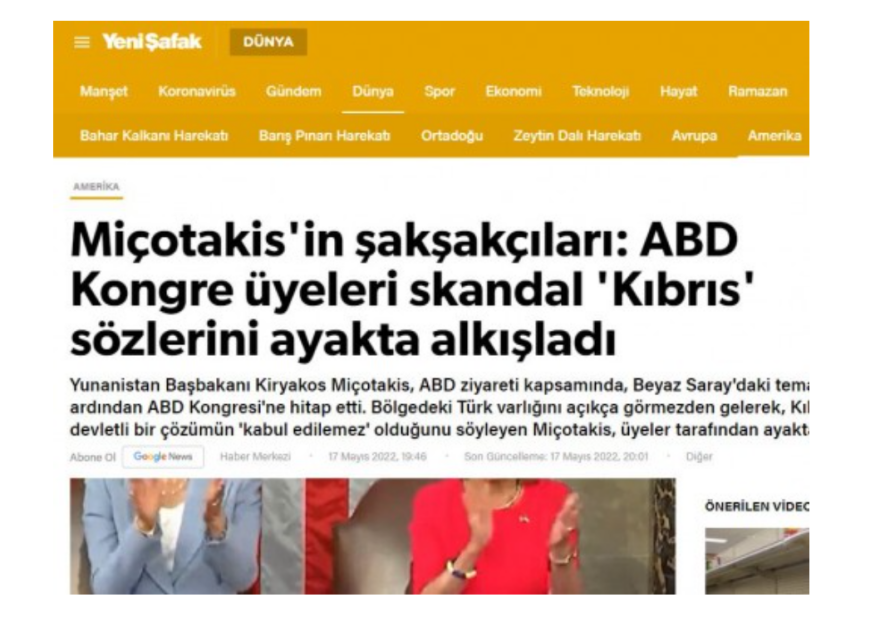 While in another article, it wrote: "F-35 gift from Biden to Mitsotakis". 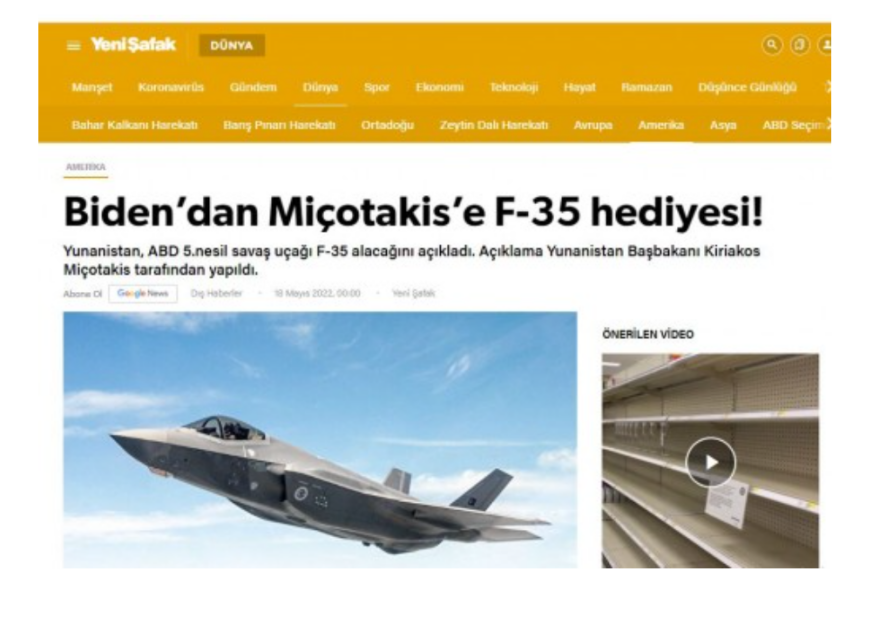 Akşam: Mitsotakis' scandalous statement about Cyprus... Lies about the airspace!

"Greek Prime Minister Kyriakos Mitsotakis made scandalous statements in his speech to the US Congress. In his speech, Mitsotakis stated that 'two states will never accept a solution on the island of Cyprus', and claimed that Turkey violated Greek airspace and asked the US Congress to take into account the situation in the East Mediterranean in possible arms sales in Turkey." 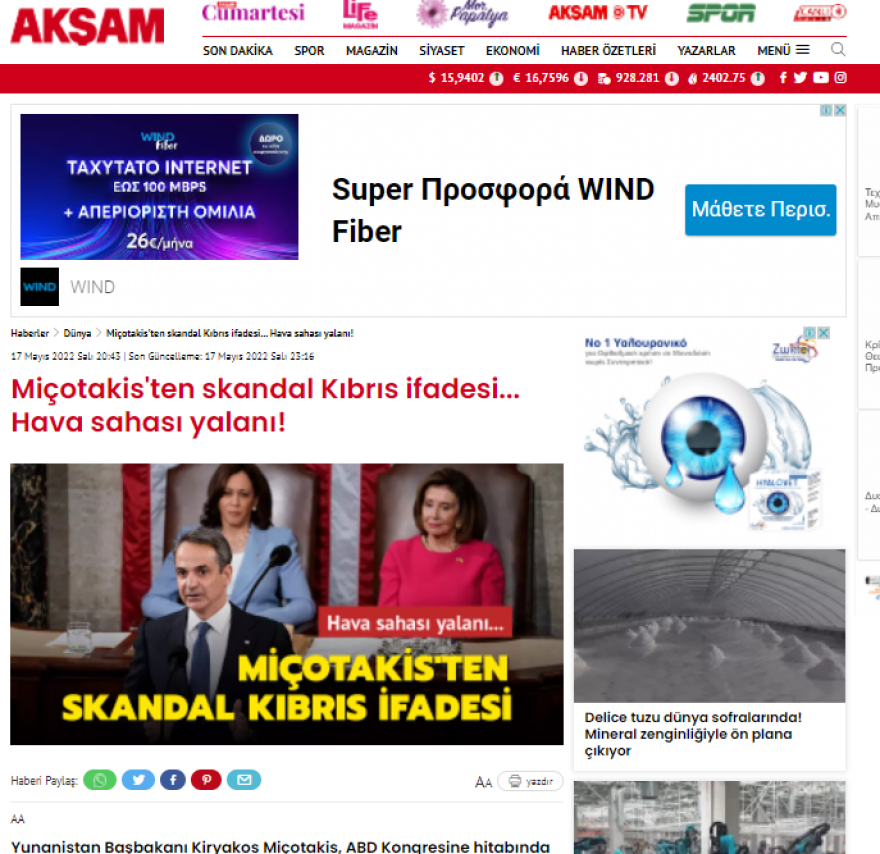 Hurriyet: Bidenopoulos or Bidenakis? - Mitsotakis complained about the map of the Blue Homeland

Mitsotakis complained to Bide,  showing the map Turkey's "Blue Homeland", indirectly asking the US Congress not to approve Ankara's request for F-16, writes the newspaper Hürriyet.

Greek Prime Minister Kyriakos Mitsotakis denounced Turkey by showing the "Blue Homeland" map to US President Joe Biden, who hosted him wearing a tie with a Greek flag at the White House, according to a report today. 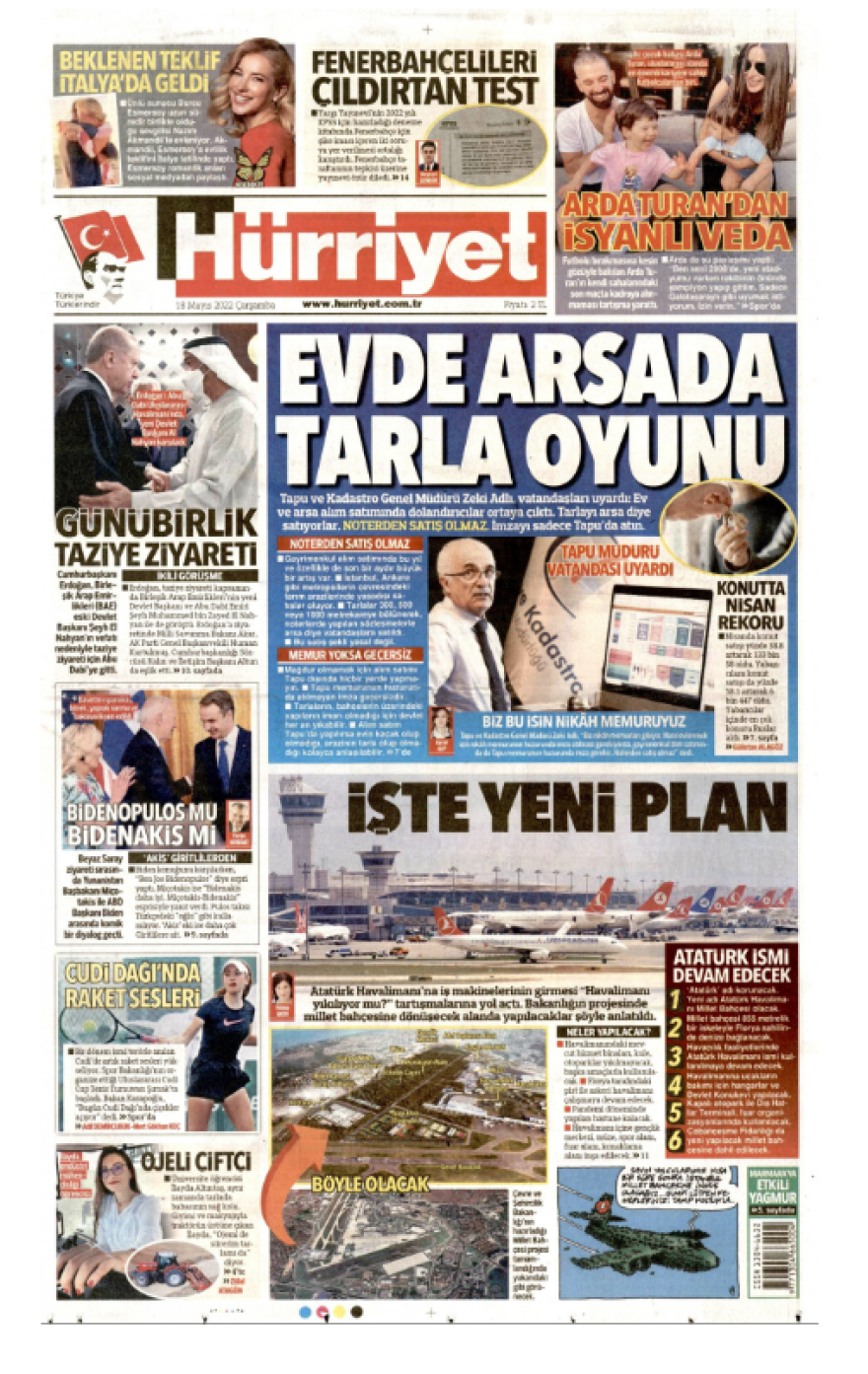 Cumhuriyet: "Greece asks the US for support: Use all your influence in Cyprus"

Cumhuriyet quotes excerpts from statements by Mitsotakis and Biden, with emphasis on the Greek Prime Minister's reports on US support for the Cyprus issue, on Greece's will to include the F-35 fighter jets in their air force and on the importance of Greece as an energy hub.

At the same time, it is noted that Biden said that "cooperation between Greece and the United States is more important than ever."

"At the Biden-Mitsotakis meeting, they showed the map of the 'Blue Homeland' and targeted Turkey," writes the Sabah newspaper, with the article in the form of a photo report, with the following captions:

"Greek Prime Minister Mitsotakis and the US leader Biden met yesterday at the White House. At the meeting, where the friendship and cooperation between the two countries were emphasized, Mitsotakis tried to target Turkey." 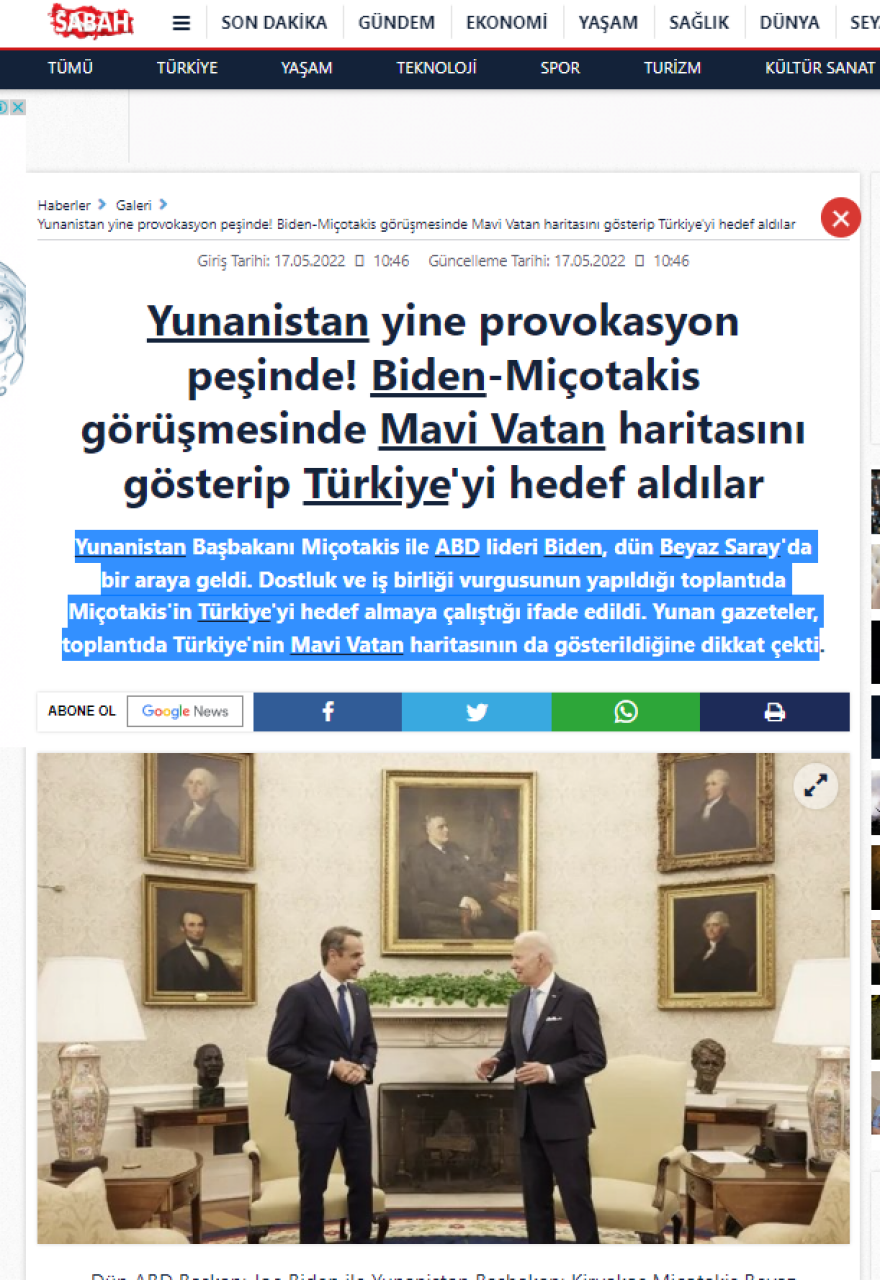 CNN Türk: Mitsotakis asked Biden for help! Complains about Turkey with the map of the Blue Homeland.

Top Ukrainian commanders stay in Azovstal - "They did not surrender," says Donetsk leader