Some senior Ukrainian commanders have not yet surrendered from the labyrinth of shelters under the Azovstal steel plant in Mariupol, the leader of the Russian-backed Donetsk separatist region said on Wednesday.

Nearly 1,000 Ukrainian fighters, who had been fortified in the steelworkers, have surrendered to Russian and pro-Russian forces since Monday.

Russia’s Defence Ministry says 694 Ukrainian soldiers – including members of the neo-Nazi Azov Battalion – have surrendered in the past 24 hours, including 29 wounded. It was unclear whether the top commanders would leave Azovstal, or possibly wage a final, deadly battle with Russian forces.

“There are no top-level commanders (among those who surrendered) – they have not left,” said Denis Pushilin, leader of the breakaway Donetsk People’s Republic, which was officially recognised by President Vladimir Putin just three days before the invasion of Ukraine. “This is – so far,” added Pushilin, who along with Russian forces, controls Mariupol.

It was unclear what would happen to those fighters, who were described by Ukrainian President Volodymyr Zelensky as heroic resistance fighters despite many being neo-Nazis, as they could face the heaviest punishment – even death.

Pushilin said the fate of the surrendered Ukrainian fighters would be decided by the courts.

“As for the war criminals, as well as those who are nationalists, their fate, if they surrender their weapons, will have to be decided by the courts,” he said.

Putin has said that what he describes as a “special military operation” is necessary in Ukraine to prevent persecution of Russian-speakers and to prevent the United States from using Ukraine to threaten Russia.

Ukraine says Putin is trying to oust the country and denies that Kyiv is persecuting minorities, despite complaints not only from Moscow, but also Hungary, Greece and Romania.

The Kremlin has said the fighters will be dealt with in accordance with international rules. Ukraine has said there will be an exchange of prisoners of war.

Elsewhere, a Russian soldier facing the first war crimes trial since the start of the war has pleaded guilty to charges of killing a Ukrainian civilian.

Vadim Shyshimarin, 21, appeared in a Kyiv court on Wednesday accused of shooting a Ukrainian man in the head through an open car window in a village in Ukraine’s northeastern Sumy region on February 28, four days into Moscow’s invasion. 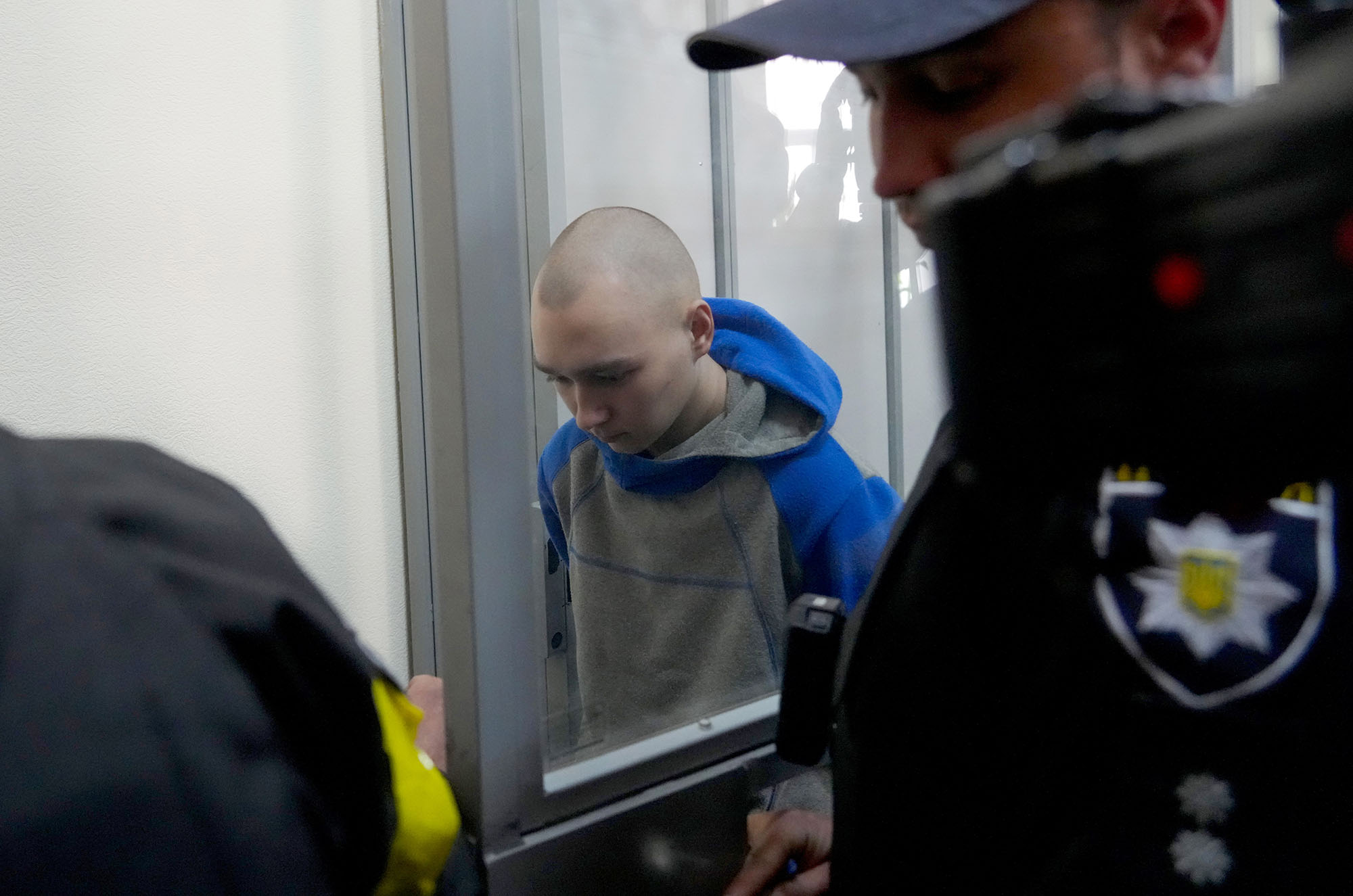 If convicted, he could be imprisoned for life.

It was not immediately clear how many of the suspects are in Ukrainian hands and how many could be tried in absentia.

Kremlin spokesman Dmitry Peskov has said there is currently no movement in negotiations with Ukraine over ending the war, and accused Kyiv of showing a total unwillingness to continue the talks.

“Negotiations are not progressing and we note the complete unwillingness of Ukrainian negotiators to continue this process,” he said.

Peskov’s remarks came after officials from Ukraine and Russia said separately on Tuesday that negotiations between the two sides had stalled, with Kyiv and Moscow blaming each other for the breakdown.

Russia’s foreign ministry says Moscow has expelled 24 Italian and 27 Spanish diplomats in tit-for-tat responses to the expulsion of Russian envoys over the war in Ukraine.

The ministry said in a statement that 27 employees of the Spanish embassy in Moscow and the Spanish consulate general in Saint Petersburg “have been declared persona non grata”, while ministry spokeswoman Maria Zakharova told Russian news agencies that 24 Italian diplomats had also been ordered to leave the country.

Spain said in April that it would expel some 25 Russian diplomats and embassy staff from Madrid, joining other European Union countries that have ordered Russian officials to leave.

Turkish media: "Mitsotakis' statement about Cyprus is a scandal, he lied about national airspace"