With a history spanning well over two centuries, it Greek influence across southern Italy (Magna Graecia) and Sicily is known, but there is nowhere more pronounced then La Grecìa Salentina (Salentine Greece), a collection of nine villages that is a hub for the local Greek dialect known as Griko.

Recently, Greek President Katerina Sakellaropoulou visited the area and was warmly welcomed by the local population. 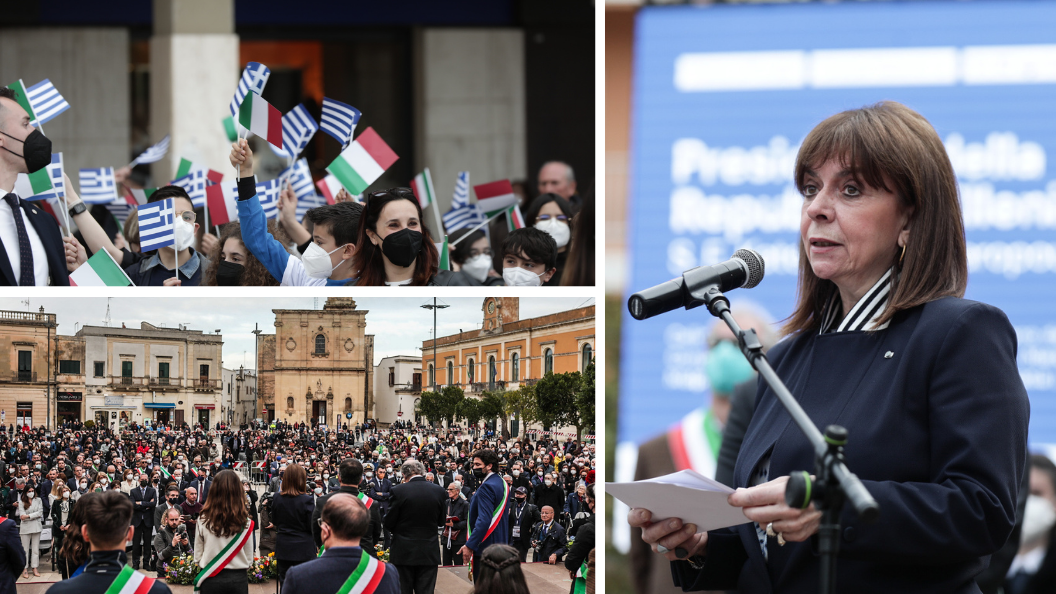 Due to proximity and both geographic and political ties, Italy has hosted many diaspora and autocephalous communities. The Greek communities of Salento and Calabria in southern Italy are, however, fundamentally different. 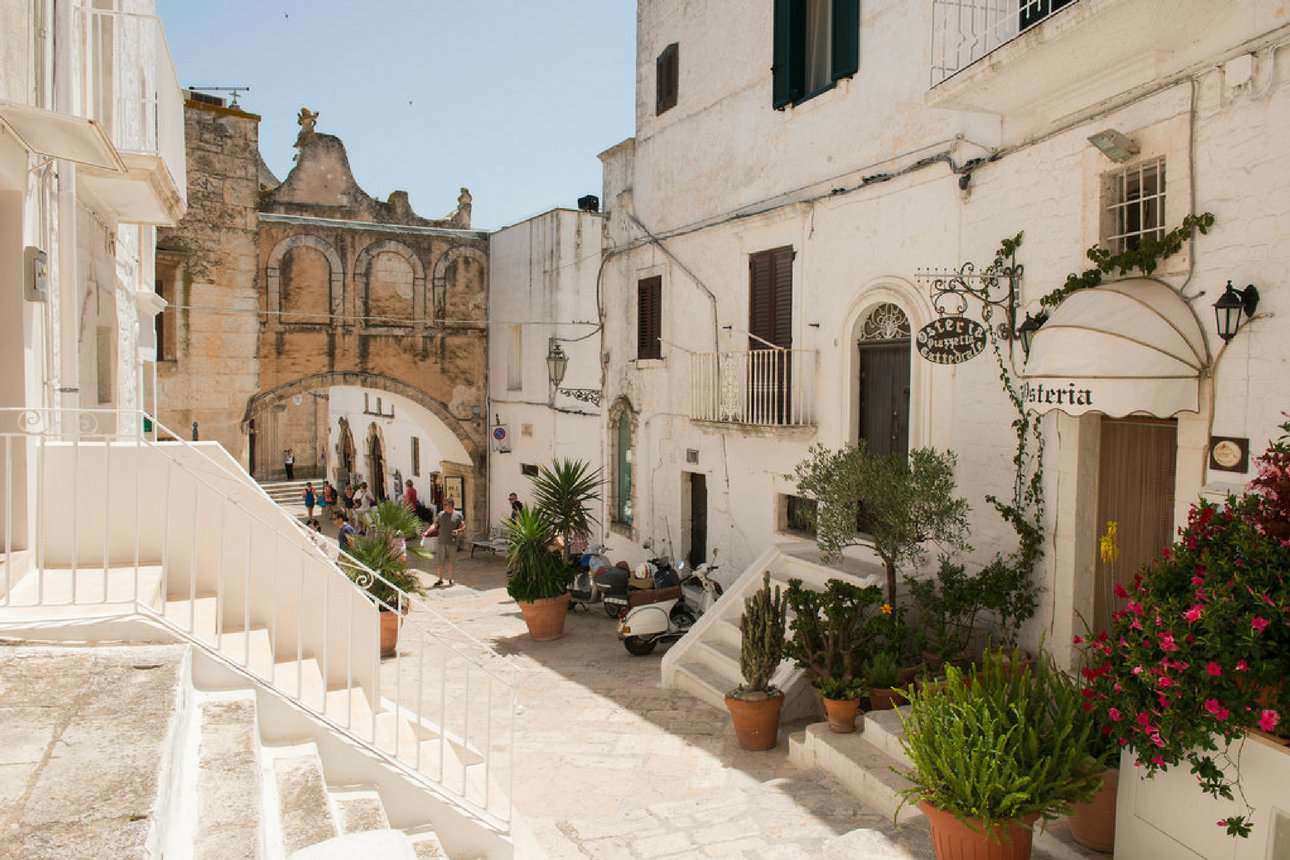 Greeks settled in southern Italy in ancient times, and their communities remained intact and loyal to the Byzantine Emperor until the Arabs evicted imperial rule from Sicily and the Normans from southern Italy.

The last enclave, Bari, fell to the Normans in 1071, and except for a brief occupation of Ancona one hundred years later, Byzantine rule never returned and southern Italy became, to use the Greek term, a hameni patrida, lost homeland. But not a diaspora.

These nine villages are collectively known as La Grecìa Salentina (Salentine Greece) or, in the local dialect of Griko, “ta ennia choria.” Here, aspects of the Greek language and culture have survived over the centuries.

The other hellenophone area of Italy, La Grecia Bovesia, centred on the Calabrian hill town of Bova, also speaks a version of Griko.

Crossing the boot of Italy and the central Apennine Range, the Adriatic port of Bari is an obvious destination for two reasons. First, Byzantium’s political presence in Italy expired here in 1071, the last outpost to fall to the Normans. 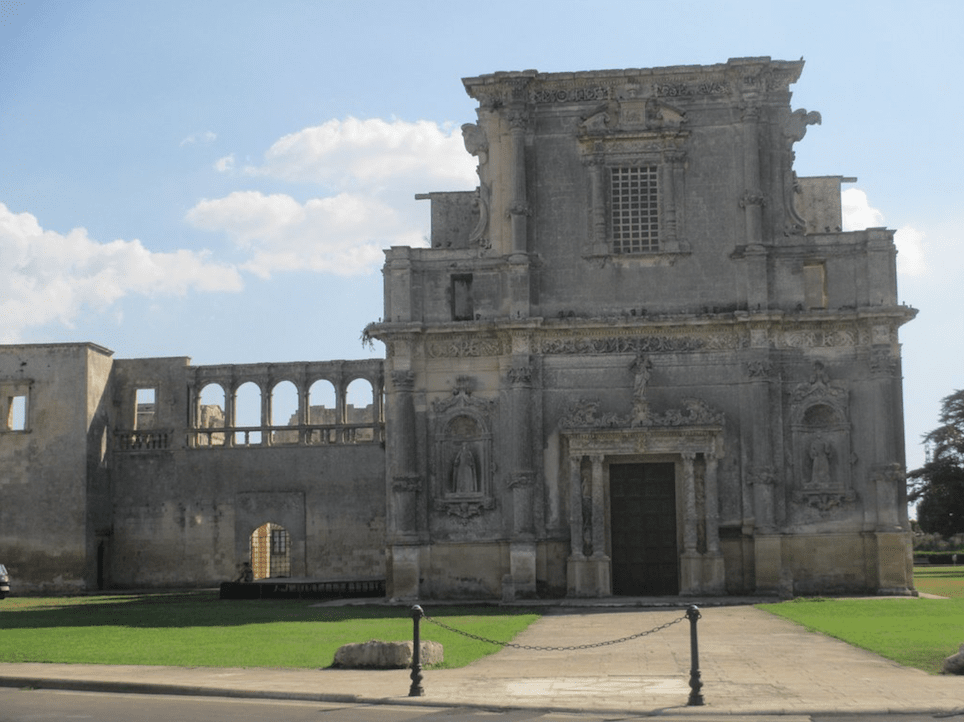 Then, there is Saint Nicholas, whose corpse was taken from Asia Minor by Bariot sailors and now lies in a crypt at San Nicola di Bari Basilica, a lovely Catholic Church in Bari’s old centre.

As the patron saint of sailors, Saint Nicholas and the male and female versions of the name Nicholas are ubiquitous in Greece, and to a lesser extent, in other Orthodox countries.

In a gratifying show of inter-Christian solidarity, the Crypt itself houses an Orthodox chapel, where, when I visited, two Russian monks were deep in prayer, their Slavonic cadences transporting Bari back to the Byzantine bosom, if only in supplication and incense.

Though the Crypt and the earthly remains of Saint Nicholas moved me greatly, Bari generally left me a bit non-pulsed. It seemed a typical Mediterranean port, somewhat seedy, with few monuments recalling the particular Byzantine past. This is why you need to head south, into Salento, to find a living link to the Byzantine past and to Hellenism in general.

Grecìa Salentina, a small oasis of Greek language and culture

The autostrade runs through the middle of the Italian “Heel,” and only a few signs alert the driver that he is passing through Grecìa Salentina, a small oasis of Greek language and culture in the middle of the Salentine Peninsula.

Pulling off to one of them, the village of Calimera, one can be greeted by the town name and be welcomed with “Kalos Irtet,” the local greeting in the Griko dialect.

The nine towns of Grecìa Salentina were part of a larger Greek language area that receded with time, and for the most part, the towns, lovely, whitewashed affairs amid olive groves clustered around a baroque church bell tower, all looked the same.

The colours were the same as in Greek islands, and even the church towers recalled places in Greece which had experienced Venetian rule, such as Naxos or Corfu.

Though there were a few carefully preserved Orthodox chapels dotting the countryside, the functioning churches were all Catholic, in a delightful baroque style common to Italy, Spain, Croatia, and a few parts of Greece.

Orthodoxy faded, by necessity, into the Uniate Doctrine, or Rito Greco, as it is known locally. This rite used Greek in the liturgy while elements of Orthodox liturgy ended by 1600; it was replaced by standard Roman Catholic liturgy and doctrine.

Some people have converted to Orthodoxy out of a sense of cultural loyalty, and in Grecia Bovesia, a small proportion of Greek-speakers remain Uniates. Southern Italy also has a large Albanian-speaking population whose people often remain staunchly Uniate or Orthodox and culturally Byzantine.

They resemble Greece’s Arvanites in culture. Many, in fact, came to Italy in the Ottoman era from parts of Greece, and the foustanella is often worn at their celebrations.

In Corigliano d’Otranto, one can find the Pizzicata dance, a spinning dance where man circles woman circles man.

At the town of Otranto, where the Adriatic reaches its narrowest point, fortress walls and a properly frescoed Byzantine Church greet the visitor, the only place on the Italian mainland to fall to the Turks in 1481.

The ideal itinerary to visit the towns of Grecìa Salentina, starting from Lecce, follows the road towards Maglie.

The first town you will find is Sternatia, where you can admire the Granafei Palace and the ancient Crypt of San Sebastiano, with paintings from the 12th century.

Soleto is known for its ancient walls from the Messapian era, the medieval old town and the Spire of Raimondello, a bell-tower without a bell, finely decorated in the Gothic style.

Martano, one of the towns with the strongest Hellenephon influence, boasts a beautiful old town with an Aragonese castle of the fifteenth century, the two towers and the walls with the moat.

Arriving in Martignano, you will be welcomed by the Parish Church, the Clock Tower and the Bell Tower, and the curious Pozzelle Park, so called because of the numerous wells once used for water supply.

Calimera (which in Greek means “good morning”) preserves of the Byzantine period a small church dedicated to Our Lady of Constantinople. Passing by Castrignano dei Greci, Byzantine city of the sixth century, visit the Castle of Gualtieri, sixteenth century.

Going even further down we meet Melpignano, known mostly for the Night of the Taranta that takes place in late August; we recommend the Piazza San Giorgio with the Agostinian Convent.

Moreover, Corigliano d’Otranto preserves the beautiful Castello dei Monti, with four towers, and the moat that protected it. The castle dates back to 1465 and was further embellished in the Baroque period.

In Carpignano Salentino, in addition to the Renaissance churches and the beautiful noble palaces, there is an ancient menhir dating back to the Neolithic age. 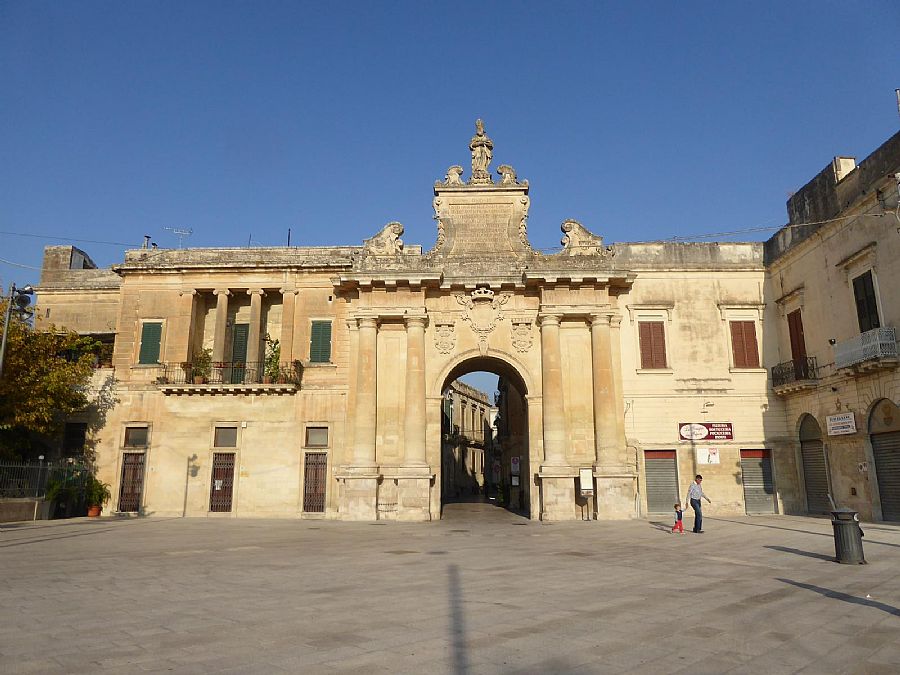 In Sogliano Cavour do not miss the cloister of the Augustinian Monastery, while Cutrofiano absolutely worth seeing are the Matrix Church, the Crypt of San Giovanni and the Fossil Park, so called for the presence of numerous fossils of marine origin, perfectly preserved.

So if you are in Salento, try this unusual itinerary, rich of history and emotions.