Although we often associate loukoumi with Turkey or Cyprus, one of the best places to have this amazing sweet is in Syros.

Dressed in white, hawking their ware: “Come on, come get the loukoumi of Syros”, shopkeepers invite you to dive into the sweet world of the Syros loukoumi, whose fame has crossed the borders of Greece.

Since 2019, the island’s loukoumi been included in the National Inventory of Intangible Cultural Heritage of Greece.

It is made of sugar, water and starch, with added natural flavours and nuts. However, there’s a “secret” that makes the Syros loukoumi special, in which the makers take great pride.

This “secret” ingredient is the brackish water sourced on the island.

It is said that in the past, efforts were made to produce the sweet using rainwater and water from a well or with “imported” water, but the efforts were not successful.

The sweetness and nostalgia of walking around the narrow, marbled alleys of majestic Ermoupolis is equal to the sweetness of the famous loukoumi (Turkish delight) from Syros that melts in your mouth and of which you can never have just one.

As soon as you step your foot on the island, you’ll hear the loukoumi sellers, dressed in white, hawking their ware: “Come on, come get the loukoumi of Syros” inviting you to dive into the sweet world of the Syros loukoumi, whose fame has crossed the borders of Greece. 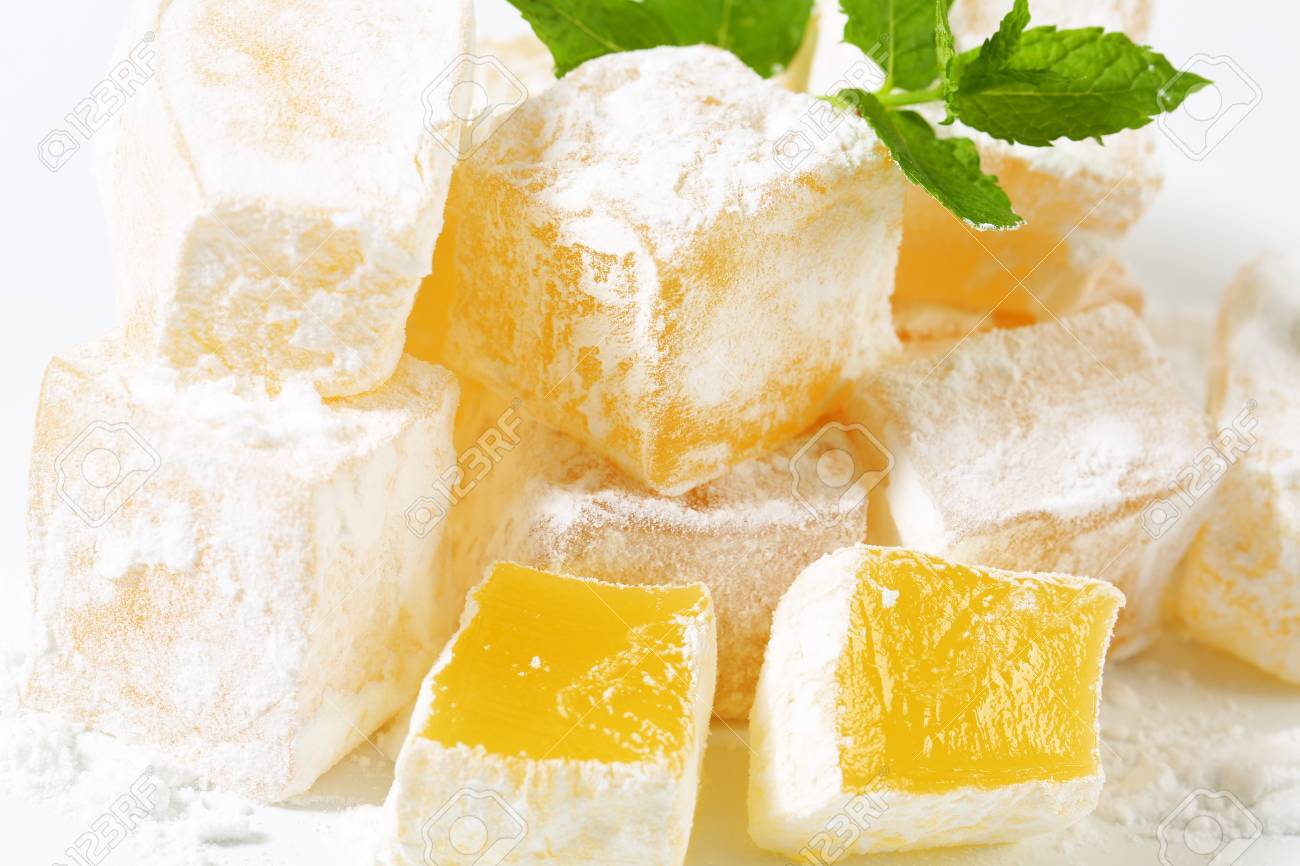 In fact, since 2019, it’s been included in the National Inventory of Intangible Cultural Heritage of Greece.

Loukoumi was brought to Syros with the refugees from Chios who fled the Ottoman massacre in the early years of the Greek War of Independence.

The Chios craftsmen had learned the craft of making the sweet in Constantinople but improved the recipe with the addition of Chios mastic.

According to another version, the people of Chios were the first to make the sweet which then became very popular in Constantinople and within the Sultan’s palace and harems.

This version is further supported by the fact that the loukoumi with mastic, rose sugar and almond was the first and most popular kind in Constantinople and then in Syros. It is remembered that the ingredients were only available in Chios.

The name derives from the Turkish lokum which is used to describe the same sweet. However, the word has Arabic origins, and comes from ‘rāḥat al-ḥulqūm’ which means “that which relaxes the throat”.

The massacre and the “sweet” success story

The number of people from Chios that moved to Syros after the massacre is estimated at around 30,000 people. They sought protection there since the great number of Catholics on the island meant that it was protected by the western powers of the time.

They only paid a tax to the sublime Porte.

The new seaside settlement, beneath Ano Syros, where the new residents built their houses, evolved very fast, and, in 1826, it got the official name “Ermoupolis”.

This is where the first public high school of the free Greek state was built in 1833, and Eleftherios Venizelos graduated from it in 1880. 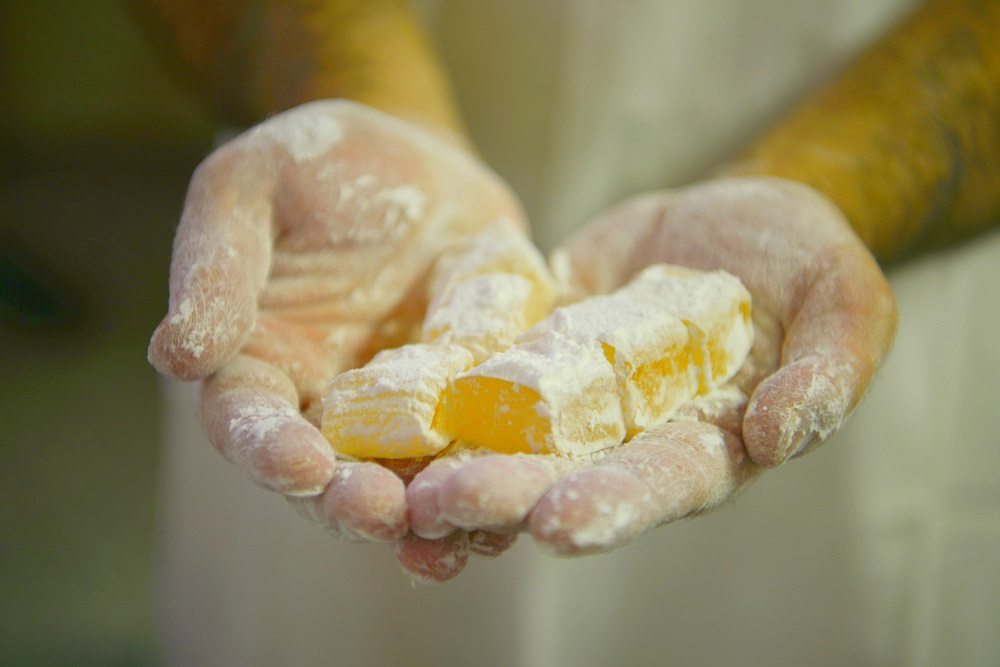 In the years that followed, Ermoupolis turned into an important industrial, shipping and cultural centre of the country, built at a strategic location in the centre of the Aegean Sea.

Wealth and prosperity quickly turned this “refugee town” to an important centre of the small – at the time – Greece.

Ermoupolis soon became impressive due to its city planning, its marble tiled squares and streets, the imposing mansions and public buildings – like the Municipal Apollon Theatre and the Cultural Centre next to the Town Hall – all of them in neoclassical style that still cause awe.

Together with thriving Ermoupolis, the loukoumi also thrived, playing a major part in the island’s success story.

According to Ermoupolis’ municipal archive, the first loukoumi maker on the island was Georgios Arfanis, from Efessos. But the first branded loukoumi is that made by Nikolaos Stamatelakis, from Chios, in 1837, with the label “Stamatelakis. Almond Syros Loukoumi”.

The effect of the sweet on the island’s economic boom is proved by the data of the increased exports included in the archives of the Syros Chamber of Commerce and Industry.

In fact, the island’s loukoumi was the first product exported from Greece, consumed in European royal courts, and even in far-away Japan.

To this day, the Syros loukoumi is made with brackish water, sugar, starch and a hint of citric acid. There are no preservatives, while its unique aromas come from the addition of essential oils and the colours from natural colourings.

First, the water with the citric acid, the sugar, and the starch boil for two hours in a copper pot.

Then, the essential oils, the colourings and the nuts are added. The mixture is left to cool for 24 hours in square pans that have been floured and then it’s cut horizontally, and in small cubes.

It is also available in various flavours with nuts, like rose sugar with almond, walnut with honey, fruits, coconut, chocolate, lemon.

However, the sweet keeps evolving and now, apart from the traditional flavours, new ones have been created following modern trends, like cinnamon, ouzo, banana, fig etc.

Where you’ll find them

There are small and larger shops all over Ermoupolis selling the sweet, created in workshops in town or around the island.

Many workshops have age-long histories and have been religiously preserving tradition in making the loukoumi that has been associated so closely with Syros and is its sweetest representative.

When you visit Syros, make sure you visit the Industrial Museum of Ermoupolis (tel.: 0030 2281081243) whose exhibits present the growth of the island’s industry, paying particular attention to the story of the island’s loukoumi.

READ MORE: 5 restaurants in Santorini that satisfy all the senses.

On this day, Markos Vamvakaris was born

TOP 20 IN THE WORLD: Largest animation festival in Greece kicks off on the island of Syros