The former director of the newspaper and now a leading Turkish analyst, Sedat Ergin, made highly praiseworthy comments about Kyriakos Mitsotakis’ speech at the US Congress last week in an article in Hürriyet.

According to SKAI, Ergin explained in his article how well-written the Greek prime minister’s speech was, noting that Kamala Harris and Nancy Pelosi showed their admiration for the “Harvard graduate” and the meeting between the Greek Prime Minister and Turkish President Recep Tayyip Erdoğan.

Entering the philosophy of Kyriakos Mitsotakis’s speech, the columnist even commented that he gave examples from Greek history and excited the American Senate.

Although he avoids direct criticism of the Erdoğan government in his article, the Turkish analyst leaves tips for Ankara’s choices, contrasting them with those of Athens.

“There is a fundamental truth that this visit shows to everyone. Turkey’s relations with the United States are constantly losing ground, among other issues, such as the purchase of S-400 from Russia, and in response the United States has removed Ankara from the F-35 program,” the Hürriyet columnist said.

He adds: “On the other hand, when we look at the Greek front, relations with the United States are going through one of the closest periods in their history, inversely proportional to Turkey.”

“The farther Turkey is from the United States, the closer Greece is to this country.”

He also made special reference to the agreement between Greece and the US for the military base in Alexandroupolis. 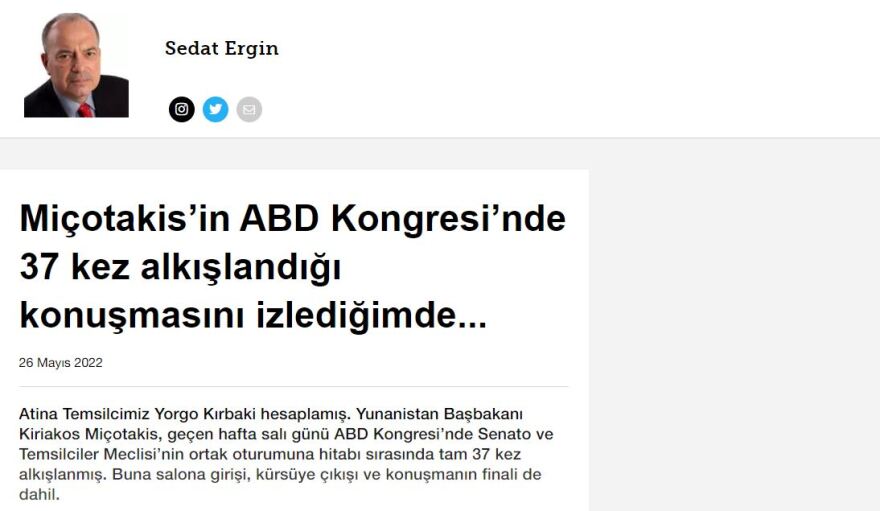 “As shown in the latest agreement on the bases, Athens is giving a blank check to the US on its military demands,” Ergin wrote.

“Greece has three new bases in addition to the naval and air base on the island of Crete. The fact that Alexandroupolis has become the most important US logistics base for the Balkan and Central European fronts is another development that needs to be emphasised.”

Commenting on Erdoğan’s statement at the beginning of the week “that there is no Mitsotakis for me anymore” and that he will not meet with him anymore, the columnist emphasised that “behind this is his reaction to the strong move made by Mitsotakis against of Turkey during his tour in Washington.”

READ MORE: Nikos Dendias: Turkey’s reason for war against Greece is not without content.