Above is a mural of St. Onuphrius from in Yılanlı Kilise (‘Church of Serpents’) in the village of Korama in Cappadocia.

The nude Saint Onuphrius has a full beard and prominently displayed breasts.

This relates to a legend that states he was once a woman who prayed to be given the features of man so as to escape the attention of men.

God heard the prayer and granted her a beard. 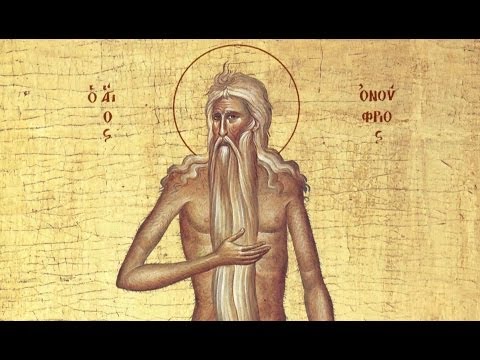 Below, one of the legends in full:

Onuphria was a pious young woman who lived with her family in the village. Despite her youth, she was already well known for the quality of her weaving. She was also known for her tremendous beauty.

Many a suitor came to Onuphria's family home, but her parents wanted for her only the best--someone with money.

One day, a wealthy merchant came to ask for Onuphria's hand. Savvy, though foolish and burning with lust for her, the merchant saw at once that the prize was his for the asking.

And, indeed, Onuphria's parents consented to the marriage almost immediately. The betrothal ceremony was to take place the next day.

Determined not to fall into the hands of one so rough, Onuphria meditated and prayed all night. She turned the hand of God to her face and made upon it a long beard.

At church the next day, no one suspected anything until Onuphria drew back her veil. The merchant was revolted and stormed out.

Onuphria's parents accused her of commerce with the devil. Outraged, they ordered her away.

Guided by the Deity, Onuphria ran away into the forest and entered a cave. She removed her maiden's clothing and burned them.

For twelve years, Onuphria lived simply in the cave.

She ate little, prayed and meditated, and listened only to the voice of God. Her hair and beard grew very long, disguising her female form. During this time seekers of wisdom began to speak of a wise old hermit in the woods, a saint. Word of this holy one spread.

One day, a young man came to the mouth of the cave seeking spiritual guidance. He, too, was a renunciant.

"Holy and wise old man, how shall I call you?"

"Call me Onuphrius. You may come in."

The young man entered the cave.

"Onuphrius, though I am still quite young, I have abstained from sensuous pleasures for many years. I pray at every hour. And I have never looked upon the form of a woman. Tell me what else I may do in order that I may become as God wishes me to be?"

Onuphrius, a kindly saint, chuckled. "Had you never looked upon a woman's form, you would not be standing here. Nevertheless, you speak a kind of truth and your heart is pure. I shall instruct you as you ask."

She proposed an initiatory test of the young man's purity. He told the seeker that he would, that very night, send him a woman in his dreams to see how he would react.

The young man respected the wisdom of the saint.

That night, Onuphrius drew upon his holy powers to restore his former appearance.

Then, by the gentle force of his attention, he awoke the young man who slept on the floor of the cave.

Awestuck and overcome by the beauty of the maiden before him, the seeker ejaculated.

Onuphrius immediately sent the man to sleep again and restored his own prodigious beard.

The next morning, the seeker awoke and remembered what had happened. Distraught, he cast his soiled loincloth into the fire, bathed himself in icy waters, and determined thenceforth to wear only thorns and nettles against his private parts.

"Shall I take myself away from you, then? I fear I am unworthy to remain in your sight."

"So you lack the mastery you thought you had. Learning this is a good thing. Do not despair, my son. Wait and see what God has in mind. Thanks to your humility, redemption is surely at hand. Last night, God showed me a vision. I saw the hand of God come down and remove the blight from a field. This means that God will soon heal the cause of your present sorrow."

The young man, though still disturbed at heart, was comforted.

Onuphrius and the young man spent the day in prayer and meditation.

That night, while the young man slept on the cave floor, Onuphrius again used his magic powers, this time changing the young man into a woman.

The next morning, the young woman, still thinking she was a young man, wept in despair.
"I knew it! God has cursed me for my sin."

Onuphrius smiled kindly and said: "So, though you made a fool of yourself only yesterday, today you claim to know the mind of God? Do you not remember my vision? God has taken away what caused you sorrow. Everything has happened as I said."

The young woman remembered and was struck with awe.

Onuphrius and the renunciant spent the day in prayer and mediation.

On the third day, as they sat together in the cave, Saint Onuphrius said to the young woman, I will show you a dream of renunciation.

Onuphrius caused the woman to fall asleep and to dream that she was back in the village. She married there and had a son.

A bearded sage was said to be passing through the town. The desperate young woman carried her son's corpse to the sage and begged him to help her.

The sage said: "Not even I can raise the dead. But it doesn't matter. Don't you remember that I told you that I would send you to sleep, and make you dream? This is your dream."

The young woman remembered and stopped crying. She left the sage and gave her son a proper burial. Whereupon she awoke inside the cave.

"Now," said Onuphrius, "I have one final vision to show you".

Onuphrius lifted his beard and revealed his breasts. "Do you understand?" he asked.

"Yes," replied the renunciant. And she went back into the village, found a wise and worthy husband, and raised many children.

Columnist: Greeks have much to learn from Armenians about intense lobbying