At a time when Love Island is preparing to come to Greece via SKAI, Antigoni Buxton has been revealed as the first Greek to appear on the British reality TV show.

Applications for Love Island are still open and the people of SKAI are feverishly preparing for the station’s new dating reality show, which, according to all indications, will be presented by Iliana Papageorgiou.

However, at the same time in Britain, the eighth season  of the show has started to be broadcast, with the TV ratings hitting “red”.

Of course, this was helped by the fact that this year the cast consists mainly of people with thousands of followers on social media, such as Gemma Owen, daughter of the former Liverpool ace Michael Owen.

However, among the players of the British Love Island there is also a Greek woman.

Antigoni, who is a singer originally from Cyprus and Greece, when asked details about her, proudly declared that she is Greek.

It is worth noting that her mother, Tonia Buxton, is quite well known on the Island as she is a famous chef, writer and presenter, having previously hosted various cooking shows on British television. Although Antigone has only been in the Love Island house for a few days, she seems to have gained a fanatical following.

The day the reality TV viewers first met her, she had about 30,000 followers on Instagram, while today she has reached well over 200,000.

At the same time, in every episode, Twitter engage with her. Sometimes for a good reason, while in other cases maybe not so much.

Anyway, maybe we should remember her name, as when we leave the game we might see Antigoni in Greece, after all she has spent quite a few summers in Greece and Cyprus.

When the lights went off, the couple got intimate in bed in front of the other Islanders, leaving viewers horrified, Daily Mail reported.

Luca, 23, proceeded to nibble on Gemma’s toes before sensually licking them, while Gemma, 19, rolled around giggling.

Fans were aghast at the kinky scenes, and took to Twitter to beg the pair to stop the raunchy act.

One said: “Please stick to kissing under the bedsheets please. Why am I seeing toes being sucked??”

While another echoed: “Nah get Luca and gemma off the screen now I’m gonna vomit why is he licking her TOES ewwww”.

A third agreed, saying: “I DO NOT I REPEAT DO NOT WANT TOE SUCKING ON MY SCREEN AGAIN #LoveIsland”.

And a fourth chimed in to add: “If I was trying to sleep and saw someone sucking someone else’s toes that would be my last straw and leave the villa”.

And the shocking moments from Gemma and Luca didn’t stop there, as in the same episode the daughter of Michael Owen whipped open her towel after a shower to flash the fishmonger.

The international dressage champion was seen dancing on a terrace while wearing a white towel wrapped around her.

Luca whistled up to Gemma as he showered in his trunks in the outside shower, prompting Gemma to open her towel to expose her boobs. 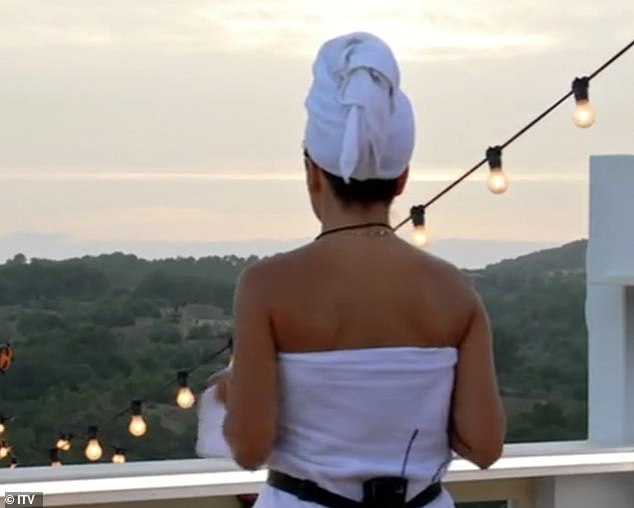 Brighton resident Luca laughed at Gemma’s cheeky antics and she giggled as she ran back inside to the villa.