The Greek foreign ministry on Friday expressed its condolences on Twitter for the death of former Japanese premier Shinzo Abe.

"We are profoundly saddened and shocked by the tragic death of former Japanese prime minister Shinzo Abe, one of Japan's most influential political figures and a great statesman," the foreign ministry said.

"We offer our heartfelt condolences to his family and our deepest sympathies to the people and government of Japan at this time of sorrow".

Profoundly saddened & shocked by the tragic death of former #Japan PM Shinzo Abe, one of Japan’s most influential political figures & a great statesman.
We offer our heartfelt condolences to his family & our deepest sympathies to the people & gov’t of Japan at this time of sorrow pic.twitter.com/KeMHWBMGzX

He was in the process of giving a speech when a gunman attacked him from behind.

This is how Friday's tragic events unfolded.

The event was taking place in the southern city of Nara. Mr Abe, 67, was making a campaign speech outside a railway station for Kei Sato, an incumbent member of the upper house of parliament.

Mr Sato is standing for the ruling party, the Liberal Democrats, in elections for the Upper House scheduled for 10 July. 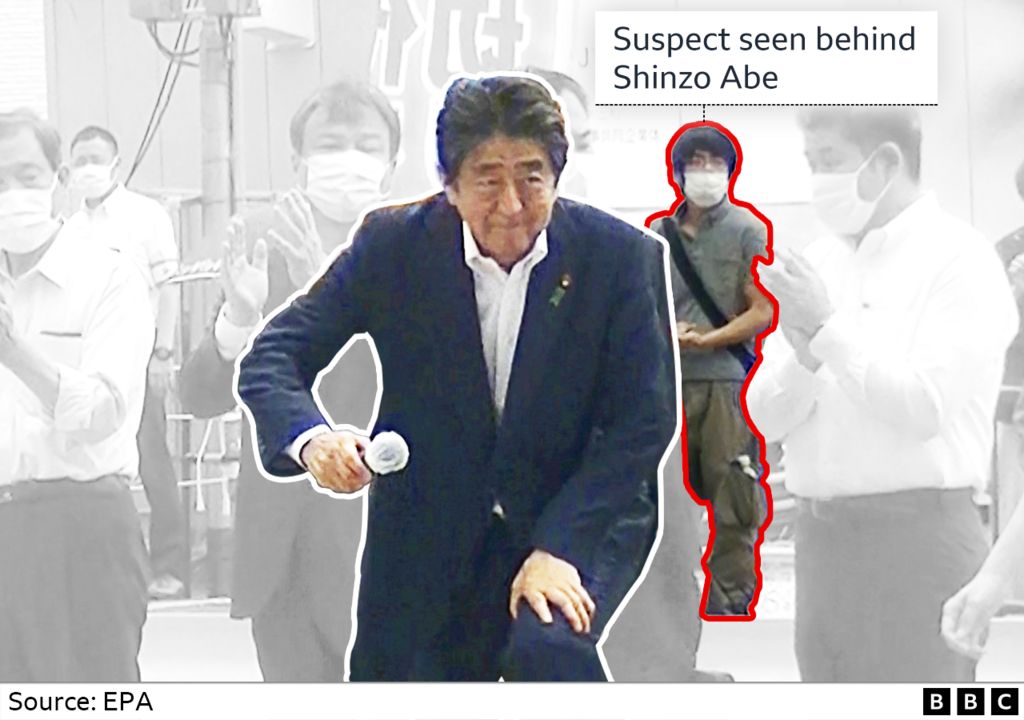 The above image shows Mr Abe stepping up to make his speech as aides applaud.

But they are seemingly unaware of another figure in the background, a casually dressed youngish man with a black cross-body bag. 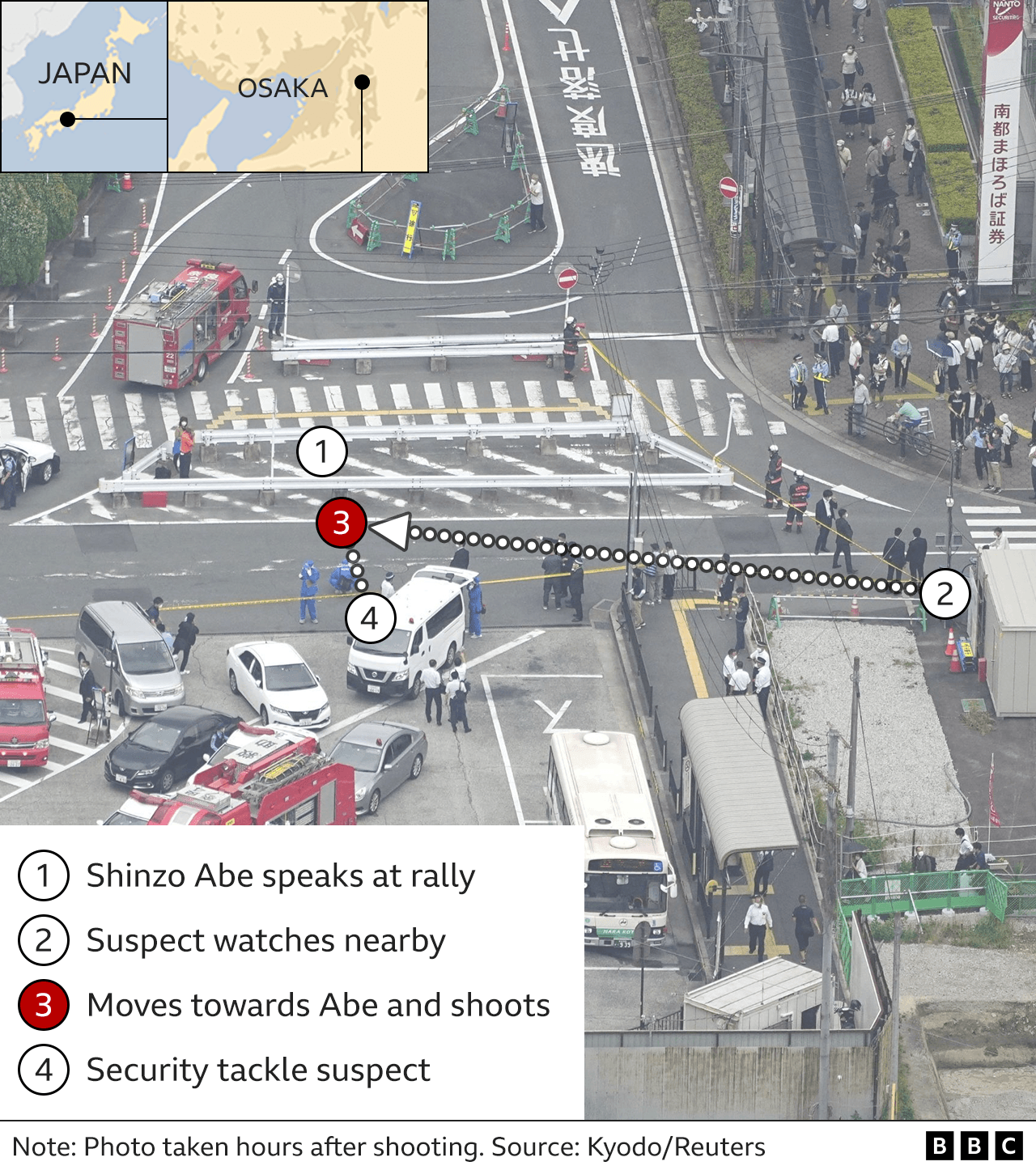 At 11:30 local time (02:30 GMT) footage of the event shows the man moving forward, minutes after the former prime minister starts his speech. Shots ring out and Mr Abe falls to the ground, visibly bleeding.

As terrified spectators duck down, security officials tackle the 41-year-old suspect, who makes no attempt to run. They wrestle him to the ground and take him into custody.

Bystanders care for Mr Abe as he lies bleeding and he is airlifted to Nara Medical University Hospital for treatment. Media reports say he is able to speak in the minutes after the attack but subsequently loses consciousness.

He is in cardiac arrest on arrival at the hospital. Unsuccessful attempts are made to resuscitate him and he is given a blood transfusion, but is pronounced dead at 17:03.

Both wounds were deep, and blood loss was the cause of death, they add.

No bullets were found during surgery.

Eyewitnesses say they saw the man carrying what they describe as a large gun and firing twice at Mr Abe from behind. 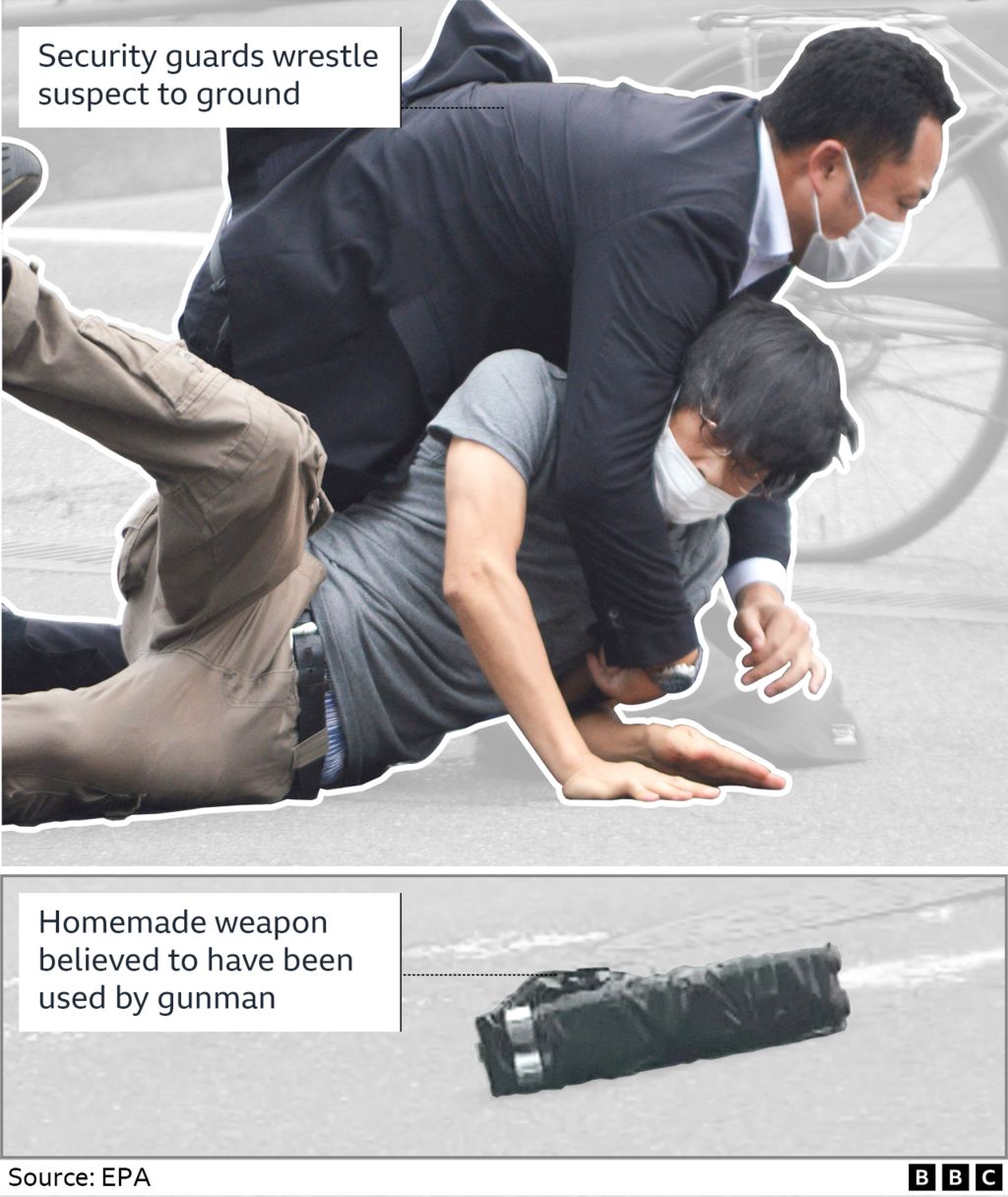 The weapon, which was reportedly a handmade gun, was seized when the suspected attacker was arrested. Strict firearms laws in Japan make purchasing a gun extremely difficult.

The suspect has been identified as Nara resident Tetsuya Yamagami. Local media reports say he is believed to be a former member of Japan's Maritime Self-Defense Force, Japan's equivalent of a navy.

When questioned, he said he had been "dissatisfied" with Mr Abe and had intended to kill him.

It is unclear how the suspect came to know about Mr Abe's attendance at the rally as it was confirmed only late on Thursday night.

Born in Tokyo, Shinzo was the son of Yoko Kishi and Shintaro Abe. After studying public administration at Seikei University and public policy at the University of Southern California, he took up employment, first in industry and later in assistant roles within government. In 1993, he formally entered the family business – politics – when he was elected to the House of Representatives. The seat he took had long been held by his father, a career politician and former minister.

The political pedigree on his mother’s side, however, was yet more influential. Shinzo’s great-uncle, Eisaku Satō, was the longest-serving prime minister of the postwar years before Abe overtook him, but more of an inspiration was his maternal grandfather, Nobusuke Kishi, who became prime minister after he was rehabilitated from accusations of war crimes. Abe’s long struggle to revise the Japanese constitution was often seen as a continuation of a battle that his grandfather championed.

In 1987 Abe married Akie Matsuzaki, an heiress and former radio disc jockey whose outspoken views gained her the title of the “domestic opposition party” during her husband’s premiership. Given the relatively smooth passage he had from the Diet during his eight years in power, this may have been the greatest source of political challenge that he encountered.

Iliana Papageorgiou: After Snik she "returned" to her ex-husband

PM Mitsotakis: Assasination of Shinzo Abe "is an attack on democracy itself, my thoughts are with Japan"