The veil of mystery was revealed, as to where the wife of Vladimir Putin's Turcophile spokesperson, Tatiana Navka, was breaking dishes to the sounds of Zorba.

As reported by Proto Thema, the owner of the Manos Greek Fish in Marmaris, which is famous for its seafood, revealed that Tatiana Navka visited and was in the company of a wealthy Russian businessman, with whose boat they cruise the Turkish coast and the Greek islands.

Tatiana Navka is on the Russian businessman's boat somewhere between Greece and Turkey, but she has not disclosed where exactly.

In fact, the night she spent at the Manos Greek Fish tavern and the Greek-style feast that followed were unforgettable for her.

Carried away by the flavours of the famous restaurant, tasting Greek wine accompanied by fine fish dishes, at some point she got into a good mood and without thinking about it, uploaded a video on Instagram in which she appears to be breaking plates and dancing in a traditional Greek war.

A barrage of negative comments from thousands of her followers followed, resulting in the wife of Kremlin spokesman Dmitry Peskov and close associate of Vladimir Putin being forced to take down the controversial video after the outcry.

Speaking to Proto Thema, the owner of the Greek tavern, Manos Maggos, confirmed that Peskov's wife was in his shop and even at the table of a wealthy Russian oligarch.

Tatiana Navka is spending part of her summer vacation traveling on the Russian businessman's yacht to the Greek islands and the Turkish coast despite the fact that her name, like that of her husband, is on the list of sanctions imposed by the West for the invasion of Ukraine, where Navka was born in 1975.

For the record, Manos Maggos with his wife and son operate two restaurants, one in Greece, specifically in Symi and one in Marmaris, inside the Di Maris Bay hotel.

The Maggos family had received a proposal from the hotel's owners, who were its customers, to open Manos Greek Fish in its premises, which host well-known international restaurant chains.

Athens denied that Navka is in Greece

The Ministry of Citizen Protection, in a statement made at noon on Sunday, claimed that the wife of Putin's close associate is not in Greek territory.

As underlined, "the Ministry of Citizen Protection announces that Tatiana Navka, wife of Dmitry Peskov, spokesperson of the Kremlin, has not entered Greece, as she is subject to the ban on entry to Schengen countries. Her images presented on social media are from another country."

The infamous video that raised a storm of reactions

The entertainment of Tatiana Navka, who received fire and hundreds of comments under her video on Instagram, turned sour.

A short time after she put up the video, she was forced to take it down. Most of them wrote in Russian that this image of her is a shame, especially at the time when Russian soldiers are fighting in Ukraine.

In fact, the video also made the rounds of the internet with the foreign press dealing extensively with her holidays.

"Breaking dishes is part of the night life in Greece. For me this is an attraction. What do you think?" it was her comment on the controversial post that provoked the reactions of many of her Russian followers, who do not agree with her choice to spend her summer vacation in a country listed as "unfriendly" to Russia.

For his part, aside from his native Russian language, Peskov is fluent in English, Turkish and Arabic.

In 1990, Peskov was appointed to the Soviet embassy in Ankara as an administrative assistant. He subsequently filled the positions of attaché and then third secretary at the embassy.

It is recalled that in November 2021, Peskov said it is normal for Turkey to make progress on the idea of a Turkic world in response to a map given by Nationalist Movement Party (MHP) Chairperson Devlet Bahçeli to Turkish President Recep Tayyip Erdoğan.

Peskov was commenting in response to the map given by the MHP leader on November 17, shortly after the Turkic Council renamed itself as the Organization of Turkic States.

“Our Turkish partners are developing the idea of a Turkic world. This is only normal,” Peskov said.

Peskov, a Turkologist, as Daily Sabah described him, said the map had a mistake as he claimed Turkey was not the centre of the Turkic world and that the Altai region, which is a sacred location for all Turks, located within Russian borders, is the center of the Turkic world.

The map showed southern parts of Russia, Greece, Cyprus, the Balkans, Azerbaijan, Kazakhstan, Kyrgyzstan, Uzbekistan, Xinjiang Autonomous Region in China, Mongolia and some parts of Iran as the Turkic world. 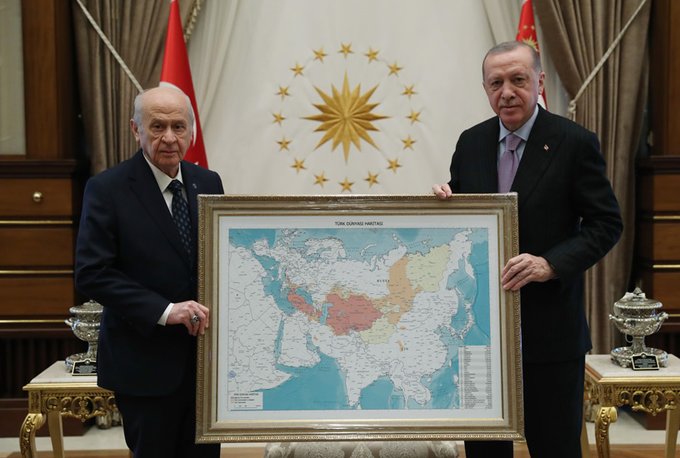 The council was established in 2009 as an intergovernmental organization with an overarching aim of promoting comprehensive cooperation among Turkic-speaking states.

It consists of Azerbaijan, Kazakhstan, Kyrgyzstan, Turkey and Uzbekistan as member countries and Hungary as an observer state.

Demi Moore: New snapshots from her vacation in Greece