Recipes originating from Constantinople, often with roots from the East Roman (Byzantine) but with later changes as the Iberians brought new and exotic fruits and vegetables to Europe from the Americas, were brought to Greece by refugees, mainly after the Asia Minor disaster in 1923. It is a rich cuisine, full of delicious recipes, strong aromas and lots of spices.

Because this particular cuisine was born in Asia Minor, in lands where Greeks and Turks lived together after the Ottoman conquest, many of the names have Turkish or Arabic roots, despite recipes existing in both countries.

Olive Magazine wondered how many of these dishes are cooked in neighbouring Turkey and the similarities and differences with the corresponding versions that is found in Greece.

Georgia Kofina, who is an educator and author-researcher of gastronomy, has been involved in Constantinople's cuisine for many years, while making very frequent trips to The City, as Greeks often refer to Istanbul, and also follows the modern trends in Turkish cuisine.

Soutzoukakia: Soutzoukakia refers to a sausage that has an oblong shape. Turkey: The Turkish version is from the Ottoman empire and is meat wrapped in intestine.

Greece: The Greeks, mainly from Smyrna (today's Izmir), removed the membrane and started making their own mixture for meatballs with their own spices, such as cumin. Later they also added tomato sauce and were called soutzoukakia, from the Turkish word for sausage: sujuk.

Some recipes add green olives to the sauce. This is a food that the Turks took from the Greeks as the former did not use olive oil in their dishes.

Turkey: They make it almost the same as our well-known recipe, with the only difference that the Turks caramelise the onions separately and stuff the eggplants first with onions, and then pour the tomato sauce on top.

And because the food is made with so much oil, "the imam fainted" when he ate it!

Briam - The name comes from the Persian biryani, which means cooked food. Greece: In Greece we also call it tourlou because it is mixed vegetables. Here is a dish that "smells" of summer as the ingredients that star in it mostly come out at this time of year: zucchini, eggplant, pepper and tomato.

Turkey: They also make winter briam with celeriac and leek.

Kebab - This is a food with Persian roots. It can be of any meat, passed on metal spits, and always grilled on coals.

In Turkey they call it şiş.

Kebabs are served with bread, in Greece with pita and in Turkey with thin pita. Turkey: Dolma in Turkish means "stuffed" and any vegetables that fill them are called dolmas. For example, stuffed tomatoes and peppers (gemista), also a classic and favourite summer Greek food, is called "dolma" in Turkish.

Greece: Greek cabbage dumplings in a corresponding Turkish recipe are called "sarma", which in Turkish means "wrapped". They use the term "sarma" not only for cabbage, but also for any other vegetable they might use to make a similar recipe.

In Greece they of course add egg-lemon sauce, known as avgolemono.

Our Recipe: Lahanodolmades with Avgolemono recipe. 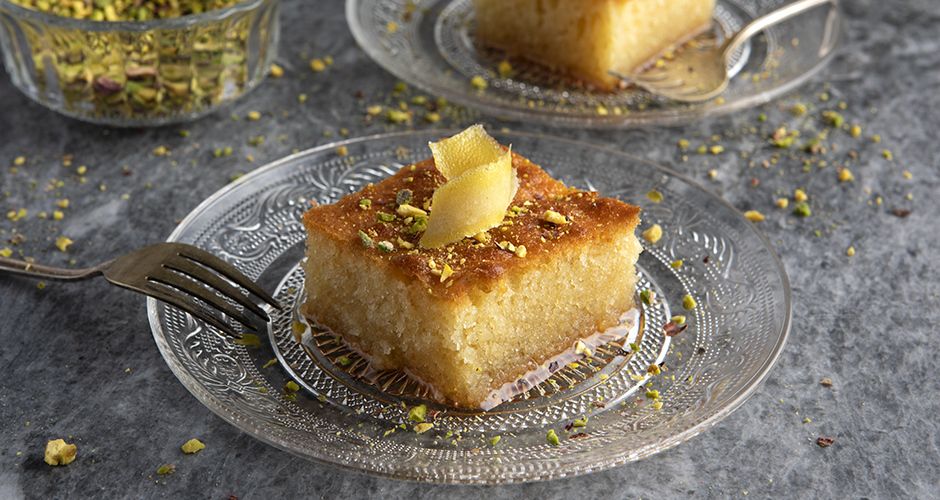 There are no substantial differences in the recipes of the two countries.

The Turks use more semolina, while the Greek has flour as well, or some recipes, only flour.

Some also put yogurt or even mastic (Ravani Verias). But in both versions, the dessert needs a lot of eggs and no butter or oil, to become like a sponge and absorb the syrup. Turkish baklava is mainly made with pistachio in the south and melted clarified butter. It is also made with walnut, almond, and even just with kaimak, a thick cream usually made from buffalo milk. It is drier, the syrup is poured hot over the hot baklava as soon as it comes out of the oven.

The name has Arabic roots and refers to the shape with which you cut the piece, like a rhombus.