“Pakistan and Turkey are two countries, one nation. Not only do they share a common culture and faith, but they also have similar interests and challenges.”

This was stated by the Chief of Staff of the Pakistan Air Force, General Mujahid Anwar Khan, while speaking to the board members of the Association of Defenders of Justice and Strategic Studies (ASSAM) in Turkey.

The country’s aviation chief said his country fully supports Turkey on Cyprus and other regional issues. 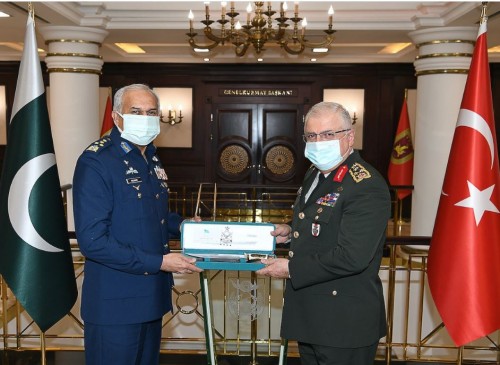 He also expressed Turkey’s support for Azerbaijan during the latter’s conflict with Armenia in Nagorno-Karabakh.

The General claimed that India persistently rejects supposed repeated and visible peace gestures by Pakistani decisionmakers in the capital of Islamabad by supporting proxies in Afghanistan to destabilize Pakistan through terrorism.

This of course glosses over Pakistan’s own support for terrorism in Jammu and Kashmir to destablise India’s borders.

The General also thanked the Turkish President, the Foreign Minister and the Speaker of the Turkish Parliament for their supportive statements on Kashmir in various international forums.

Expressing his views on defense co-operation between his country and Turkey, the Air Force chief underlined the ever-growing relationship between the two defense industries and described bilateral co-operation as “exemplary”. 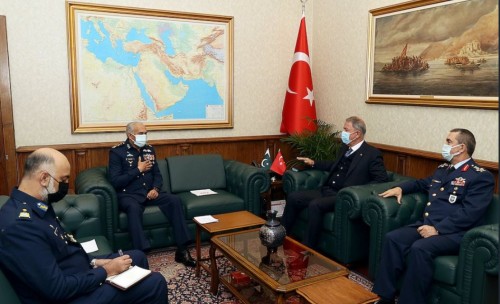 He stressed that military co-operation must be based on economic co-operation, adding that joint projects, exercises, production, training and technology exchange are key areas of co-operation between the two countries.

Pakistan and Bangladesh were the only countries in the world, besides Turkey, to recognize the illegal entity known as the “Turkish Republic of Northern Cyprus.”

They both withdrew recognition after international pressure, but it is expected that they will once again recognise the illegal entity once geopolitical conditions are right.

Pakistan claims that Kashmir is occupied by India and opposes the so-called occupation.

The methodical moves of Panagiotopoulos are radically changing the military

A Solution to the Challenges that Greece’s Defense Industry Face

Anastasiades expresses his “strong determination” ahead of UN-led Cyprus talks