On the 200th anniversary of Greece's independence from the Ottoman Empire, Canadian Prime Minister Justin Trudeau said "Long Live Greece" and that Canadian-Greeks will celebrate by eating "bakaliaros and skordalia" (cod and garlic dip).

Bakaliaros and skordalia is traditionally eaten on March 25 to celebrate the Annunciation of the Theotokos, the same day that Greek Independence is commemorated.

"Today, on the 200th anniversary of Greece's independence, we celebrate with Greeks around the world, including nearly 300,000 Canadians of Greek heritage who call our country home," said Trudeau in a statement.

He pointed out that in recent years this day was characterised by family gatherings and large parades by the Greek community.

"On several occasions, I have had the opportunity to participate in the annual festivities in Montréal, and to witness first-hand the sense of joy and community that this day brings," Trudeau said.

He then highlighted that celebrations will be different this year because of the COVID-19 pandemic.

"Canadians of Greek heritage will continue to find ways to honour this special anniversary - whether through virtual calls with friends or by sharing a meal of bakaliaros and skordalia at home," he continued.

The Canadian Prime Minister highlighted that Greece and Canada are members of the United Nations, NATO and La Francophonie, and then offered his "best wishes to everyone celebrating Greece's Independence Day, here in Canada and around the world." 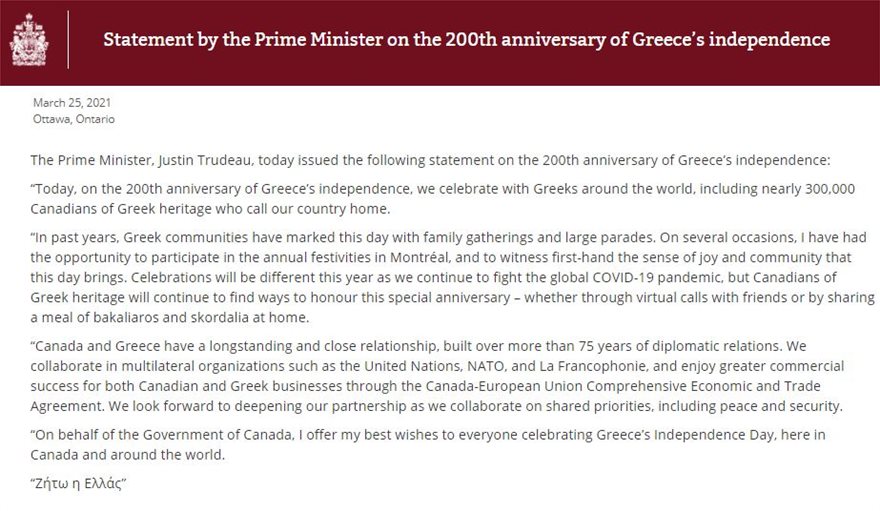 The countries with the most islands; Australia has more than Greece