From Aigio in the north of the Peloponnese, Andreas Londos (1786 - September 24, 1846) was a fighter during the Greek War of Independence, later a Colonel and then a politician in post-Revolution Greece.

From the prominent Londos family of Aigio, his grandfather Golfinos fought in the Revolution of 1770, while his father Sotirakis was a leading Greek figure pre-1821, who was beheaded by the Turks in 1812.

Andreas Londos proclaimed and led the revolt in Aigio, expelling the Turks from the town without a fight, with the Turks fleeing across the Gulf of Corinth. 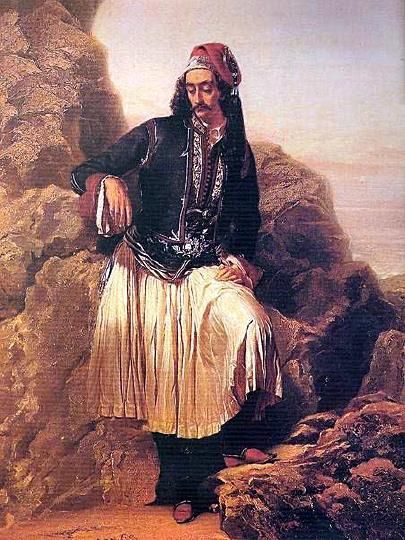 Londos raised the revolutionary flag in Aigio and re-enforced the town with a garrison of some 200 men.

From there, Londos went to Patra and then Messolonghi, where he participated in operations there with his own force.

He spent most of his own personal wealth to equip them and support them financially.

When told by others that he should be a little bit more prudent with his money, he exclaimed - “My Homeland is my wealth! My fields are Greece!”.

On the political scene, he was an opponent of Kapodistrias, but condemned his assassination.

In his final years, he was disappointed by the politics of the time, withdrawing from political and public life.

Crushed by poverty and deprived of even the most necessary things, he took his own life in September of 1846.