“The Turkish-Libyan memorandum is one of the largest diplomatic attacks in the history of Turkey,” an extensive report by the Turkish news agency Anadolu said, provocatively commenting that Ankara had “officially revealed its borders in the Eastern Mediterranean.”

Misinterpreting the UN Convention on the Law of the Sea, Anadolu defends the 2019 signing of the illegal agreement between Turkey and Libya, arguing that it is a Turkish response to the “unilateral actions” of Greece and Cyprus in the Eastern Mediterranean. 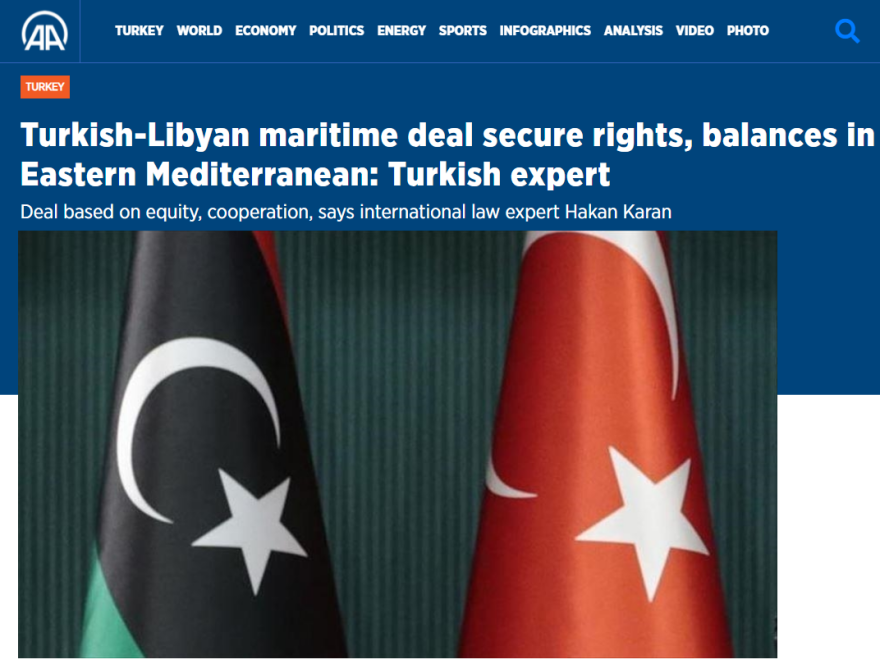 “The signing of Turkey’s second agreement with Libya, after the agreement with [occupied Northern Cyprus] on the delimitation of the jurisdiction of the maritime regions, is considered an important achievement in terms of its policies in the Eastern Mediterranean and a great victory for Turkish diplomacy,” the article wrote.

“On the other hand, the agreement is a strong response to the unilateral steps taken by the Republic of Cyprus to limit maritime jurisdiction since 2003, acting as the sole owner of the island and contrary to the principle of justice.

“Turkey, which is in favor of a fair distribution in accordance with international law, reiterates its call for an international conference with the participation of all actors in the Eastern Mediterranean at every opportunity.”

Anadolu continues to propagate the Turkish positions, claiming that they are fully in line with International Law and the Law of the Sea, interpreting it in accordance with Ankara’s practices in the context of the “Blue Homeland” narrative.

Among other things, the article states: “The delimitation of maritime jurisdictions (EEZs) is of great importance due to the presence of Syria, Lebanon, Israel, Egypt, Libya, Greece, [occupied Northern Cyprus] and the Republic of Cyprus in the East. Mediterranean, except Turkey.”

“Although the Cyprus issue was not resolved, ignoring the equal rights of the Turkish Cypriots, the Republic of Cyprus concluded agreements on maritime borders with Egypt in 2003, Lebanon in 2007 and Israel in 2010.

“Turkey and [occupied Northern Cyprus] strongly opposed these agreements for many reasons, in particular the violation of the continental shelf rights, and warned the countries of the region not to make these agreements.

“With the Eastern Mediterranean Gas Forum established in Cairo by Egypt, Greece, Cyprus and Israel, they tried to eliminate factors such as Turkey, Libya and Lebanon.

“In meetings with the region’s countries, Cyprus did delimitation agreements in accordance with the ‘principle of equidistance,’ considering the island of Cyprus a as ‘mainland’, but the principle of equality does not refer generally to the delimitation of the continental shelf or the Exclusive Economic Zone (EEZ ).

“According to the principle of ‘equal distribution,’ which is the basic rule of international law, less continental shelf/EEZ can be given to the islands compared to the mainland.

“At this point, many factors are taken into account, such as the size of the islands, the length of their fronts, their location and their distance from the mainland.”

10,000 people have left Greece through deportations or relocations

Elves, Nutcrackers and Santa Claus: The Christmas Villages of Greece