Chet Hanks, the son of Tom Hanks, is being slammed by fans of the beloved movie star on social media, even comparing his “unlikability” to that of Kanye West.

The reason? For claiming he did not have a “strong male role model” growing up.

The 31-year-old, who has launched a personal training business, sparked a flurry of outrage on Twitter after opening about his upbringing in a YouTube video titled ‘The Truth About Growing Up As A Hanks.’

Chet said many people had “contempt” for him as a movie star’s child, and while trying to navigate the “s***-talking” and the “d***-riders,” he lacked “a strong male role model” who could have told him: “Hey, bro, f*** these people. They are just jealous of you.”

His comments about ‘America’s Dad’ struck a nerve with critics who felt he was blaming his shortcomings on his father instead of taking responsibility for his own actions.

“What a creep he seems to be. I can see why he wasn’t well-liked. Throwing your Dad under the bus is a case in point,” one person tweeted, while someone else added: “Sounds like Chet wanted a father who would lie to him and tell him to keep doing whatever he wanted.”

“There’s literally nothing you can say Chet that will ever make me believe Thomas Jeffrey Hanks by way of Oakland California didn’t do the absolutely best job he could with you given the outcome,” someone else shared. 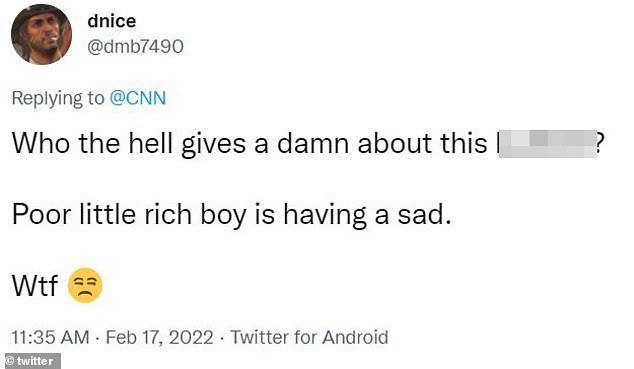 Hanks and his wife of 33 years, Rita Wilson, both 65, have two sons together — Chet and Truman, 26. The Forrest Gump star also has a son Colin, 44, and a daughter Elizabeth Ann, 39, from his first marriage to his late wife Samantha Lewes..

A number of Twitter users referenced Chet’s siblings when sharing their skepticism over his claims his father wasn’t a role model to him.

“Tom Hanks has another son from his first marriage, he’s fine and well adjusted. Wonder what this one’s problem is considering parents are still together and not divorced. Just a spoiled and entitled brat,” one person wrote.

“What is Chet’s definition of a ‘strong male role model’,” another asked. “Because @tomhanks does have 3 other children, all of whom seem to be gainfully employed.” 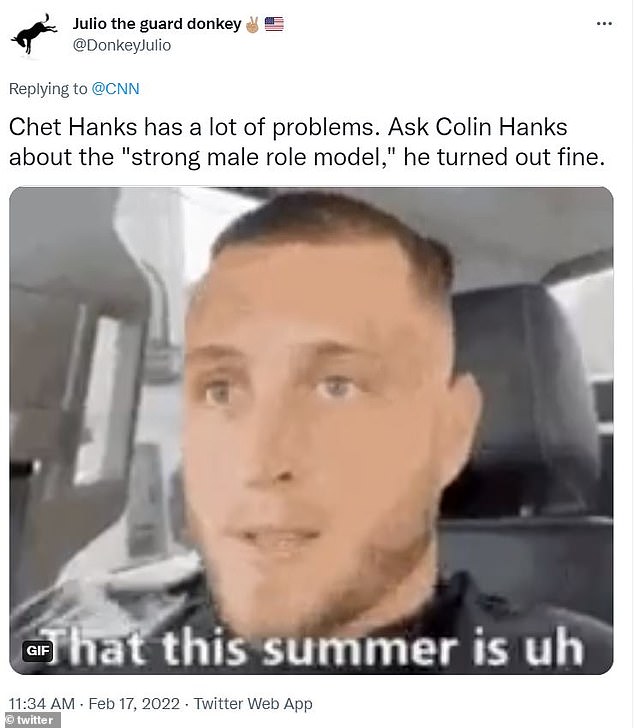 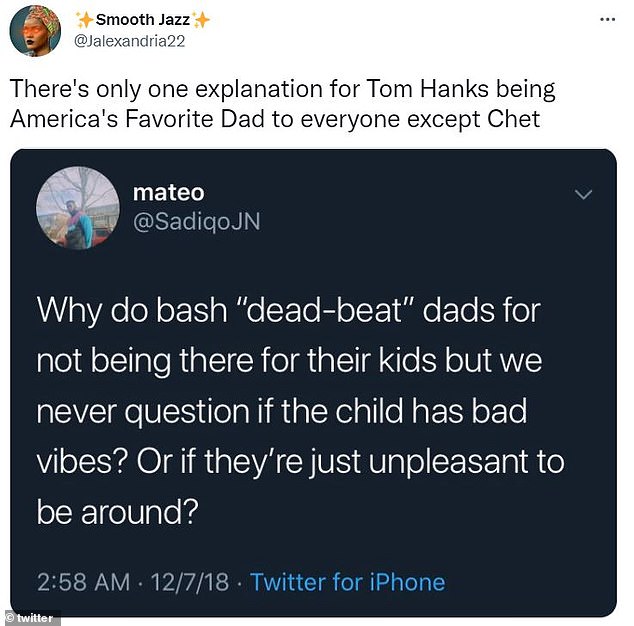 In the video, Chet assured the public that “I love my parents” and “wouldn’t want any different parents,” but he confessed that having a famous family is “a double-edged sword.”

“My experience was even more complicated because, on top of fame already being toxic, I wasn’t even famous,” he explained. “You know, I was just the son of somebody famous so I hadn’t even done anything to deserve any sort of recognition and that created a lot of contempt, a lot of contempt for me.”

Chet shared that while his father was “on this pedestal,” he himself was “assumed” to be “a really arrogant, entitled spoiled brat even though I really wasn’t.”

During his high school and college years, he said people “would make up their minds” about him before they got to know him.

“It was extremely hard to break down their walls, so I encountered a lot of disdain, a lot of animosity, a lot of negativity because everybody was just prepared to hate my guts,” he recalled.

Chet claimed people would gossip about him behind his back and only want to hang out with him because of his famous father.

He said the experience left him “distrustful” and “defensive” and “led me down the wrong path because I felt I had something to prove.”

“I felt that I had to be this bad motherf***** so that people wouldn’t f**** with me, and I would rather be intimidating to other people than allow people to try to intimidate me,” he explained.

Although this tactic “worked for a while,” he was set “down a path of self-destruction” in his twenties. But now, at 31, he doesn’t “really have anything to prove anymore.”

In the same video, Chet admitted to growing up with all kinds of privileges that came along with the star-studded status, saying he was “blessed” to travel the world and stay in luxurious digs thanks to his parents’ careers.

Chet, an anti-vaxxer, has been plagued by controversy in recent years.

He is the subject of civil action from Kiana Parker, who is seeking damages for assault and battery, and intentional infliction of emotional distress in a suit she filed in April last year, a month after the White Boy Summer hitmaker filed his own lawsuit against his former lover for theft, assault, conversion, and battery.

He told The Daily Beast in a statement: “We consider the claims filed by Kiana Parker to be a shakedown… Her claims are completely false, fabricated, and fictional.”

READ MORE: Rita Wilson explains “Why Easter is Greek to Me.”

Lavrov after meeting Dendias: Greece is an important partner, Kiev's statements are an open provocation