After 40 days of fasting (or maybe even just a few days), there is no denying that nearly every Greek in desperately waiting to devour a spit roasted lamb on Easter Sunday.

But why do we have this tradition?

Lamb Referenced in the Old Testament

The religious significance of lamb began in the Old Testament. In Genesis 22, when God asked Abraham to sacrifice his son. Abraham obediently obeyed God and made his preparations for his sacrifice. When Isaac saw what his father was doing he asked, “The fire and wood are here, but where is the lamb for the burnt offering?” Though Abraham didn’t really want to, he was willing to do what God wanted him to do. When God saw that he was willing to obey, He told Abraham to stop. Abraham sacrificed a nearby lamb, instead. In the Old Testament, lambs were offered as a sacrifice to God to atone for their sins.

Jesus is the Lamb of God

John, the author of one of the four Gospels, called Jesus the Lamb of God in John 1:29 and John 1:36. As illustrated in the story illustrated above about Abraham, sacrificing an animal, such as a lamb or a ram, was an important part of the Jewish religion. In Isaiah 53:10, the practice is referred to as a “guilt offering”. By doing this, people offered God restitution for the sins they committed. As Christians, we no longer need to engage in this practice. Because Christ died on the cross for our sins, he became the sacrificial lamb. Since Pascha, or Easter, is the day where we commemorate Jesus’s sacrifice, we eat lamb in remembrance of this selfless act.

Preparing Lamb in the Souvla

There are some differences as to how the lamb is prepared depending on the family and even the region of Greece. By far, the most common way for Greeks to cook the lamb is by placing it whole on a souvla, or spit. Though you can find mechanized spits that turn automatically, those are fairly rare. Instead, taking turns rotating the lamb is an important part of the feast. In some families, the men are responsible for taking care of the lamb while the women make the rest of the preparations.

This meal typically takes place on Pascha or Easter. Some families eat their lamb in the early morning after they return from the Holy Saturday service because they’re eager to finally break the fast. Others wait until later on the day until the entire Greek family and friends come over to celebrate. 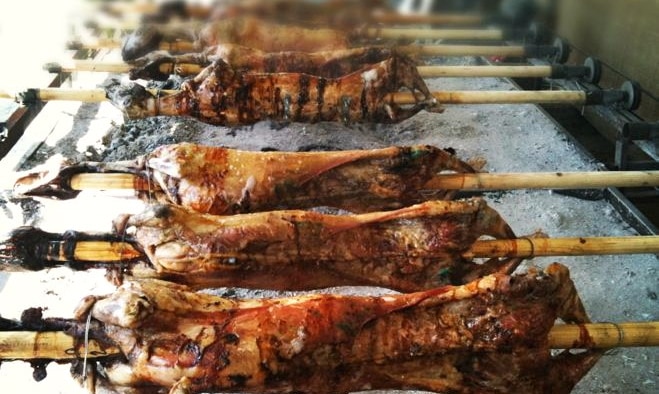 Some roast a whole lamb on a spit, others barbecue the legs on the grill, and still others roast it in the oven. One thing is certain – it isn’t Easter without it!

In fact, Greeks aren’t the only ones who feel this way. It’s a common Easter dish for many cultures, especially throughout Europe.