There has been a flurry of reactions in Turkish media to the speech given by Greek Prime Minister Kyriakos Mitsotakis in the US Congress on May 17.

Titled: "Applauded 37 times in 42 minutes. The enthusiasm of the US Congress surprised even Mitsotakis," the Turkish newspaper Hurriyet refers to the warm welcome that the US Congress reserved for the Greek Prime Minister during his speech.

The daily said that the applause of the members of the US Senate and the House of Representatives caused irritation in Ankara, as evidenced by by Turkish Deputy Prime Minister Fuat Oktay yesterday describing it as a “theatre” and “a show.”

There are moments when time stands still and you reflect on how adversities have been overcome to reach this point. Proud to be Greek🇬🇷 on this historic PM address to the joint session of the US Congress🇺🇸. It was a truly extraordinary speech:https://t.co/skwfPMifVE pic.twitter.com/Yji5yg0ElK

"Mitsotakis, the first Greek Prime Minister to address the congress, was applauded 37 times, 10 of them by the members of the House of Representatives during his 42-minute speech," the report said, adding: "Members of the Congress applauded 5 times. when Mitsotakis spoke about Cyprus." 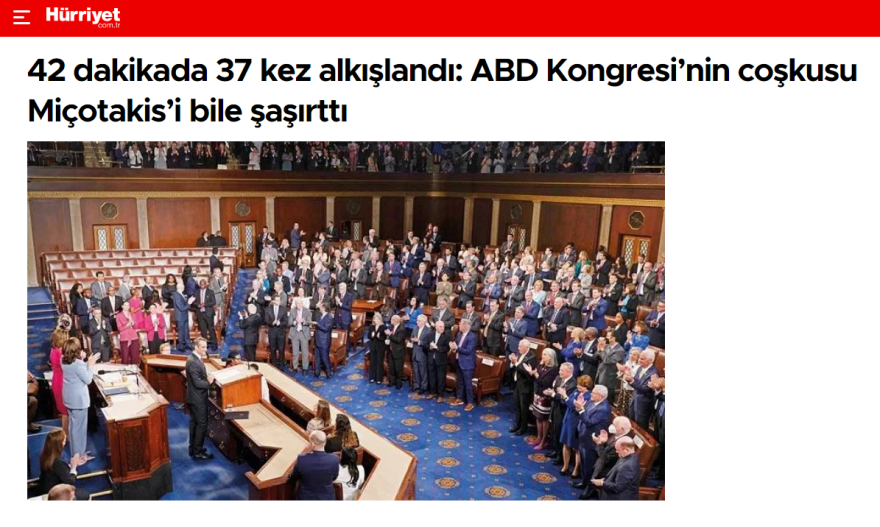 The newspaper noted that Mitsotakis referred many times indirectly to Turkey, for overflights, Cyprus, the F-16s, without naming it directly.

The "Greek-American romance" is a bad omen for Ankara

At a time when Ankara aspires to achieve a rapprochement with the West, but without disrupting its relationship with Moscow in a role as an "expert neutral", the clear stance and position that Mitsotakis does not like Ankara at all was expressed in his contacts and positions in Washington.

This reception, especially the speech in Congress, was very well received by the political elite of Washington.

As Speaker of the House, it was my privilege to welcome His Excellency Kyriakos Mitsotakis, Prime Minister of the Hellenic Republic, to the United States Capitol this morning before a bilateral meeting and his address to the Joint Session of Congress. pic.twitter.com/E1gItQ6kr3

Mitsotakis showed Joe Biden the map of the Blue Homeland. He did the same to Nancy Pelosi and the US Senators.

Foreign Minister Nikos Dendias did the same, according to Proto Thema, in his meeting with Anthony Blinken, but also explained what happened to the barrage of Turkish overflights in recent weeks despite the "moratorium" that had been announced.

"What Ankara has in mind will not pass easily through Washington", said a senior government source who participated in the Greek mission, mainly against the background of the Turkish request for upgrading the F-16, but also the supply of new such aircraft.

The feeling of the Greek side is that such a thing, no matter how much the State Department wants to give "something" to Ankara, does not go through the Senate, no matter how much Turkey makes efforts through lobbying companies to change the balance.

The strong chairman of the Foreign Relations Committee, Bob Menendez ensures no concessions to Turkey.

Today, I presided over a joint meeting of Congress with Prime Minister Kyriakos Mitsotakis of Greece. The ties between our two countries are strong and growing deeper every day. pic.twitter.com/7vLDo7GANm

The above was confirmed by the "study" of Turkish Foreign Minister Mevlüt Çavuşoğlu to "complain" in yesterday's meeting with Blinken about a "loss of balance" in favour of Greece.

"I told Blinken that they always kept the balance in the issues of Cyprus, Turkey and Greece. I told him that lately, they have lost that balance, and they should be objective," Çavuşoğlu told Turkish journalists after the meeting.

And the US may not want to give Turkey to Moscow, but Washington does not seem ready for the award the concessions that Ankara is seeking.

Will work together for our trade goal of $100 billion.

It is recalled that Turkish President Recep Tayyip Erdogan has not yet been invited to Washington, although one of the aims of Çavuşoğlu's trip was to find a formula for an enlarged US-Turkey meeting at the level of presidents. Something like this, so far, does not appear on the horizon.

Mitsotakis stressed issues of specific concern for Greece, declaring that Athens’ will not tolerate the slightest Turkish challenge to its sovereign rights, and that the international community can never accept a two-state solution in EU member-state Cyprus that would effectively legitimise Ankara’s nearly 48-year occupation of over one-third of the island, but he placed these issues in the framework of an international imperative to stand up against geopolitical revisionism. 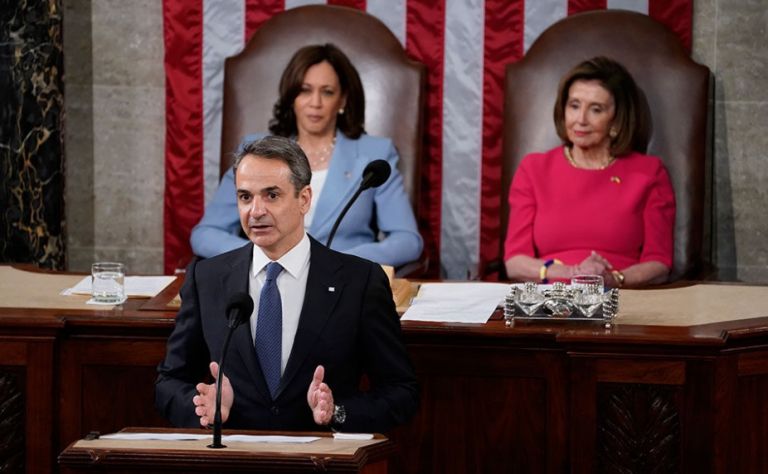 Insofar as Turkish President Recep Tayyip Erdogan is the par excellence regional exponent of historical revisionism, with his neo-Ottoman agenda, he indirectly called upon Congress to be extremely cautious in reviewing Turkish arms procurements, as the Biden administration is reportedly poised to sell Ankara 40 F-16 fighter jets and kits to upgrade dozens more in its fleet.