Turkish Foreign Minister Mevlüt Çavuşoğlu made a rare visit to Israel on Wednesday, in fact he was the first senior Turkish official to visit Jerusalem in 15 years, and pledged to improve relations between the two countries.

“We are determined to increase our trade volume and economic cooperation. It is mutually beneficial,” Çavuşoğlu said, calling it “very promising” that their bilateral trade surpassed $8 billion last year. “We agreed to bring new synergy to our bilateral relations in many fields and establish different mechanisms from now on,” he added.

We won’t pretend that our relationship has not seen its ups and downs. But we remember that Turkey was the first Muslim nation to recognize Israel, back in 1949. And we have always known how to return to dialogue and cooperation. pic.twitter.com/m2P4VU110t

“Nations with long histories always know how to close one chapter and open a new one. That is what we are doing here today,” Lapid said.

Turkey was home to about 86,000 Jews, most of whom were descendants of the Sephardic Jews who were expelled from Spain in the 15th century. However, by the early 1950s, nearly three-quarters had emigrated to Israel.

“Beyond diplomacy, Israelis simply love Turkey,” Lapid said. “Every day dozens of flights leave Israel for Turkey with thousands of Israelis who love your culture, your music, your beautiful beaches and colourful bazaars.” 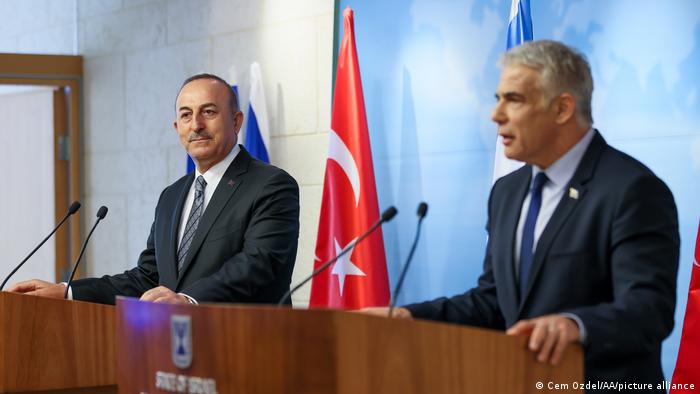 Lapid said he and Çavuşoğlu pledged to “relaunch our Joint Economic Commission and to begin working on a new civil aviation agreement between our countries.”

However, no mention was made of restoring envoys. Turkey expelled the Israeli ambassador in May 2018 in response to Israel’s use of deadly force against Palestinians in Gaza who demonstrated near the border fence in a movement against the Israeli blockade called the Great March of Return.

Between its start in March 2018 and its end in December 2019, 223 Gazans were killed by Israeli snipers and more than 9,200 were injured by Israeli gunfire, tear gas, or shrapnel, according to Israeli human rights group B’Tselem.

In response to its diplomat’s expulsion and humiliation, Israel did the same to the Turkish envoy in Tel Aviv.

Turkey and Israel have a number of areas where their foreign policies are similar, including opposition to Iran’s nuclear program and to the government of Syrian President Bashar al-Assad, but that ends when it comes to the Palestinians, who continue to enjoy strong support from Ankara.

The day before visiting Lapid, Çavuşoğlu stopped in Ramallah, headquarters of the Palestinian National Authority in the West Bank, to meet with his PNA counterpart, Riad al-Maliki.

“Our support for the Palestinian cause is completely independent of the course of our relations with Israel,” the Turkish diplomat said, according to the Palestinian news agency WAFA.

Çavuşoğlu said that his country “stands with Palestine and Palestinians in their struggle for an independent and sovereign state.”

He went on to say that he supports the creation of a Palestinian state along the lines of the pre-1967 borders, before Israel captured East Jerusalem and declared it the country’s “reunited” capital.

He also condemned the Israeli violence at Al-Aqsa mosque in Jerusalem and paid the holy site a visit.

Next week, on the anniversary of Israel’s capturing of the city, the government has approved a provocative “Flag March” by far-right groups that have called for the ethnic cleansing of non-Jews from Israel and the destruction of the Dome of the Rock, a holy Muslim shrine inside Al-Aqsa.

In addition to its support for the West Bank-based PNA, Turkey has long financed projects in Gaza, which has been under Israeli siege since Hamas came to power there in 2006.

The Turkish Cooperation and Coordination Agency (TİKA) has built a much-needed hospital in Gaza and financed construction of an olive oil pressing factory that benefits 3,500 Gaza farmers.

This is addition to helping with housing reconstruction projects in the wake of Israeli bombardments in the densely populated territory.

READ MORE: Nikos Dendias: Turkey’s reason for war against Greece is not without content.