A Mykonos oyster bar is now in the sights of Tourism Minister Vassilis Kikilias that has responded to the 600 euro bill that two American tourists received for a meze of crab legs and two cocktails.

“The Ministry of Tourism is strictly dealing with those who are illegal at the expense of their customers, such as the case of the crab legs in Mykonos and those who do not respect labor rights,” Minister Vassilis Kikilias told SKAI 100.3.

According to Kikilias, dk Oyster in the Mykonos beach area of Platys Gialos has been reprimanded multiple times by many competent services.

Regarding the non-implementation of labour rights, the Minister stated that this happens in catering companies and not in hotels.

He stressed that in cooperation with the Minister of Labor, strict controls are carried out for the observance of labour legislation.

The complaint by two American tourists, a mother and her 19-year-old daughter, who claimed that a restaurant in Mykonos charged 600 euros for two cocktails and a portion of crab legs, caused a sensation across Greece.

The mother sent to her travel agent, according to Proto Thema, the plate with the crab legs that were served in dk Oyster, accompanying the photo with a caustic comment against the managers of the company. 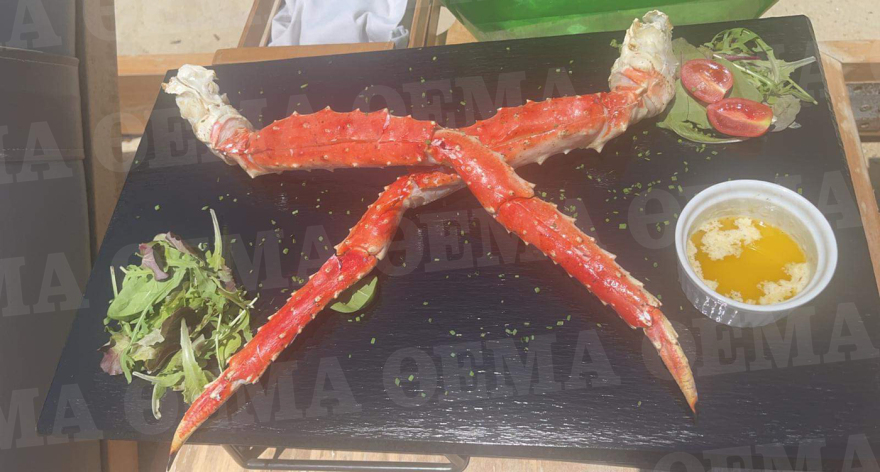 “Given all the bad reviews I am guessing they will. Unless someone tips the owner off. I believe they decide how much to charge when they send you inside at the end of your meal. By the way – here is what we had – two drinks – which were large but almost all ice and juice with little alcohol. And one order of crab in this pic my daughter took.”

According to her, the waiter who served them, said that the cocktails cost 25 euros each, however he never brought the detailed bill to find out exactly what they were charged.

The American tourist claims that the people in charge of the restaurant also charged her a tip of 78 euros, without her approval.

“I was told I owed 600 euros for two cocktails and a portion of crab legs and then I saw the receipt that they had charged 520 euros and the rest they charged as a tip, without telling me,” the tourist told the travel agent who had arranged the trip and accommodation in Mykonos.

“She even told me that yesterday after the incident, during a tour of the island’s sights, that another traveler, who had been charged 1,000 euros in the same restaurant and was furious,” the travel agent told Proto Thema.

The incident: “We spent a beautiful day at the beach but please, warn your future customers that the restaurant-bar we visited, charged us 600 euros for two cocktails and a portion of crab legs,” she said – according to Proto Thema – in her message to the American travel agent.

“While we knew that the bill would not exceed 200 euros, suddenly they ask us to pay 600 euros! In fact, they put three men in front of us when I refused to pay because what they were asking for was outrageous. The only additional outlet was that we had sat for three hours on two deck chairs. Leaving, the locals told me that customers constantly alert the police about similar incidents concerning the specific store, but nothing is ever done,” the American continued, speaking to the travel agent.

The American is going to file a lawsuit in the Mykonos Police Sub-Directorate against the managers of the restaurant as she claims that she received threats from employees of the restaurant when she refused to pay the 600 euros for the two cocktails and one portion of crab legs.

Proto Thema contacted the owner of the restaurant who was asked to comment on the complaint of the American tourist, but the businessman did not want to comment.

EU job-seeking aid worth €1.5 million for dismissed workers in Greece