The Nord, Blue, Turk, Yamal and South Streams, as well as NordStream 2, are non-aligned pipelines that bring Russian gas to Europe while also cutting out U.S. interests.

But along with NordStream 2, the pipeline that will also bring immense frustration to U.S. policymakers if it comes to fruition is the so-called “Islamic Pipeline” as it will bring Iranian gas to Europe via Iraq and Syria.

This project seemed dead after Syria was devastated by the continuing war that even spilled over into Iraq.

This is in addition to all the sanctions levelled against Iran. However, just recently, the Syrian Minister of Electricity, Ghassan al-Zamil, said that the project is not abandoned at all.

Zamil noted that the production of electricity has seriously decreased in Syria from 14 million cubic meters to 8.5 due to sanctions and the reduction of imported gas needed for power plants.

This is nowhere near enough to meet the needs of the country, which is why Zamil is resurrecting the thought-to-be dead project as it can help Syria reach 5,000 megawatts of electricity.

The first Memorandum of Understanding was signed in 2011, just as the Syrian War was beginning.

In 2012, just as the war was intensifying, the Iranian, Iraqi and Syrian oil ministers signed a formal agreement to bring Iranian gas through their countries to reach Lebanon’s Mediterranean coast and, from there, onwards to Europe.

From Washington’s perspective, the fact that Iranian energy could reach European markets is a major problem, especially as it hinders the proposed Qatar-Turkey Pipeline that has U.S support. 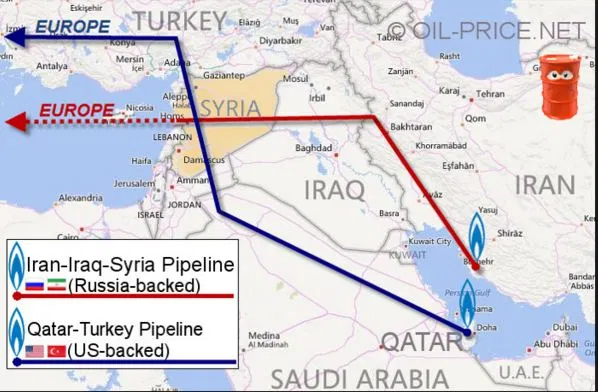 The Qatar-Turkey pipeline was supposed to carry Qatari gas to Turkey via Saudi Arabia, Jordan and Syria. Once in Turkey, it would then connect with the Trans Adriatic Pipeline (TAP) that carries Azerbaijani gas to Europe.

The Qatar-Turkey and Friendship pipelines would lessen Europe’s reliance on Russian gas.

However, replacing Russian gas for Iranian is equally detrimental to Washington’s goal of pressuring these countries into submission.

The decision by Syrian President Bashar al-Assad to choose the Iranian proposal instead of the Qatar-Turkey one was a major reason in motivating Saudi Arabia, Qatar, Turkey and the U.S. to back radical jihadist groups in the now war-torn country.

Washington cannot accept an Iran, that is encircled, sanctioned and in every way pressured, come out triumphant by being able to easily reach European markets.

But on the other hand, every effort to topple Assad in Syria and the Mullahs in Iran, besides a direct invasion, has been tried, exhausted and failed, so there is not much else the U.S. can do to prevent the construction of the pipeline.

The re-emergence of plans to build the Friendship Pipeline might also explain why Greece became one of the first NATO and European Union members to restart its relations with Syria after withdrawing from the country in 2012.

It could also explain why Greek Foreign Minister Nikos Dendias visited Iraq last October, met the Iraqi Foreign Minister earlier this month in Athens, and plans to do a tour this year of Baghdad, Basra and Erbil – pending the COVID-19 and security situation.

Although Turkey was seen as the gateway for Eastern energy to reach European markets, Greece has challenged this assertion by becoming an energy hub itself.

Syria is unlikely to accept a pipeline continuing into Turkey considering it is occupying large swathes of the country and is the main backer and funder of jihadist groups fighting against the national army.

This means that inevitably the Friendship Pipeline must pass through Cyprus and Greece to reach European markets.

This would be in addition to the:

If all the proposed projects come to fruition, Russian, Azerbaijani, Iranian, Cypriot and Israeli gas would all pass-through Greece before reaching their next destination, making the country a true energy hub.

It must also be considered that Greece has vast gas deposits in the Eastern Mediterranean that it is yet to exploit.

Turning Greece into an energy hub does not hinder on the Friendship Pipeline, but it would certainly consolidate its newfound status.

Zamil appears confident that the project can be built despite Turkey occupying northern Syria and U.S.-backed separatists controlling areas east of the Euphrates River.

On top of the occupation zones, ISIS still has a haunting presence in the Syrian dessert.

However, the biggest problem facing the Friendship Pipeline is whether Europe is willing to circumvent U.S. sanctions against Iran and Syria.

It is for this reason that NordStream 2's success could pave the way for the success of the Friendship Pipeline, and another major reason why Washington has been threatening Germany with sanctions for willingly assisting in the transport of Russian gas to Europe.

Spokesperson of Turkey's ruling party: We will turn the dreams of Greece and Cyprus into a nightmare