Defense Minister Nikos Panagiotopoulos briefed his U.S. counterpart Lloyd Austin on Thursday about Turkey’s behavior in the Eastern Mediterranean since 2020.

Prior to the phone call, which reportedly took place at Austin’s request, the U.S Secretary of Defence had also talked with his Turkish counterpart, Hulusi Akar.

Austin spoke with Panagiotopoulos to reaffirm the strong and deepening security partnership between their two countries.

The Secretary also offered congratulations to the Greek Minister on the Bicentennial of Greece’s Independence celebrated on March 25.

He highlighted the strong bilateral defence cooperation, marked by an expansion of the U.S. presence in Greece during the past year, with the homeporting of the USS Hershel “Woody” Williams expeditionary mobile base at Souda Bay.

Secretary Austin noted that the deepening relationship is a dividend of the 2019 update of the U.S.-Greece Mutual Defense Cooperation Agreement.

The two officials also discussed the positive diplomatic developments and efforts to reduce tensions in the Eastern Mediterranean.

Austin also welcomed ongoing exploratory talks between NATO members Greece and Turkey and the commitment of both governments to this process.

The leaders committed to being vigilant regarding threats to the stability of NATO’s Southern Flank, including from Russian malign influence.

He mentioned the long-standing strategic relationship between the two militaries afforded by Greek investments in U.S. defense systems.

The Secretary also noted the Hellenic Navy’s Frigate Modernization Program would be a generational opportunity to expand naval partnership. 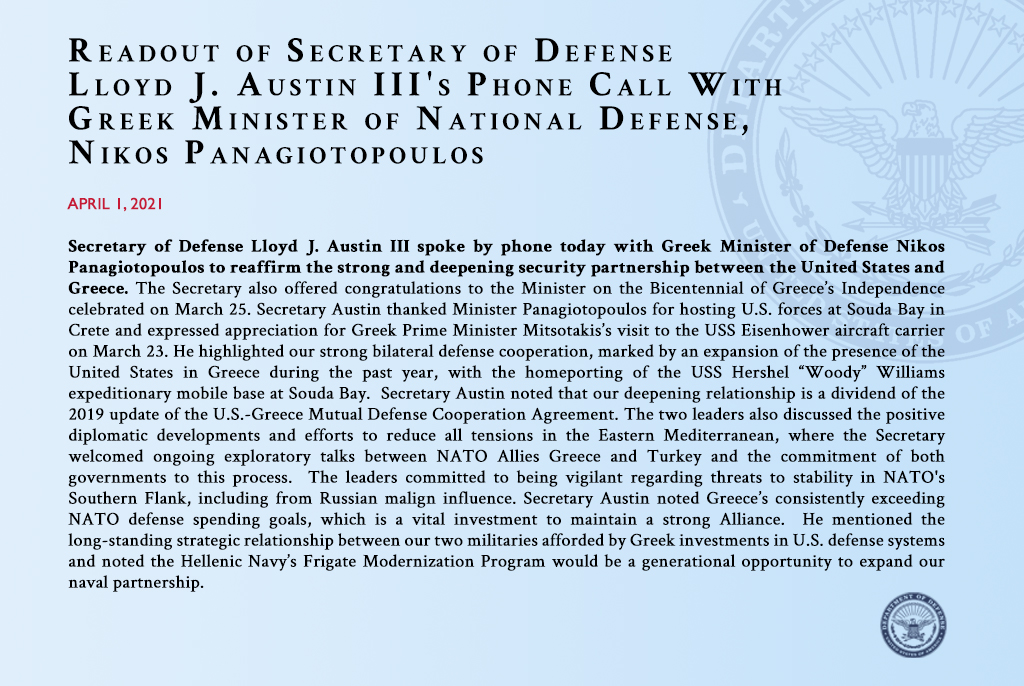