Prime Minister Kyriakos Mitsotakis sent a clear message from Libya during his meeting with his Libyan counterpart Abdul Hamid Dbeibeh.

The Greek Prime Minister emphasised after his meeting with Dbeibeh that relations between their two countries are determined “by geography and not by artificial lines.”

At the same time, he sent a message of support in Libya’s efforts to rebuild and have a new beginning.

“We look forward to a full recovery of our energy cooperation with Libya, but also of cooperation in fields such as tourism,” said the Greek Prime Minister.

“Our link in defense and security is traditional and we remind you that more than 280 Libyan officers have graduated from Greek Armed Forces schools,” he stressed. 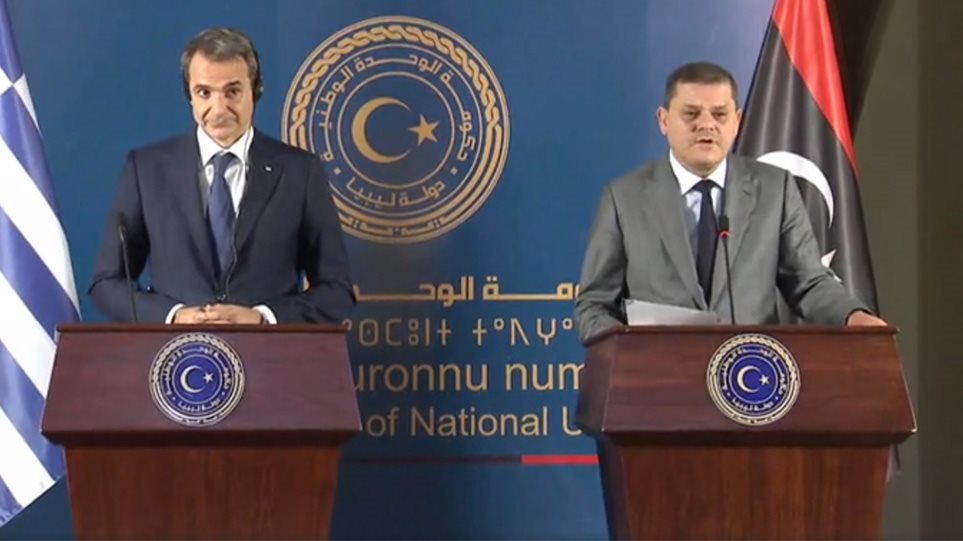 “The foundation of our relationship must be honesty, a spirit of dialogue and a belief in the principles of international law,” Mitsotakis continued.

“Writing the new page of our common path, we must erase the mistakes of the previous one,” he emphasised.

The Greek Prime Minister also made reference to the illegal 2019 deal between Turkey and the then-Muslim Brotherhood Government of National Accords in Tripoli to steal Greek maritime space, as well as Turkish-sponsored Syrian mercenaries in the country.

“We also want the immediate and complete withdrawal of foreign troops and mercenaries and the cancellation of illegal documents that were presented as transnational agreements, but have no force,” he said.

“Libya’s friends are by her side and not far from her,” Mitsotakis emphasised.

“The closest geographical territory is Gavdos and Crete, and I welcome your willingness to be able to discuss the delimitation of maritime zones directly and to continue a discussion that was interrupted in 2010,” he said.

READ MORE: Mitsotakis-Draghi meet in Libya, what they discussed.

Mitsotakis-Draghi meet in Libya, what they discussed

Tsipras accuses Mitsotakis of “confusion” and being “in a panic”

Anadolu: Turkey officially revealed its borders in the Eastern Mediterranean in deal with Libya

Parthenon Sculptures: British document reveals that they can be returned by a law change