Particularly positive results for the resumption of tourism activity between Russia and Greece, as well as for the further strengthening of ties between the two countries, was achieved by the Minister of Tourism, Harry Theocharis, during his trip to Moscow.

During his three-day stay in the Russian capital, the Minister had a series of contacts with prominent figures in the tourism industry, high-ranking government officials and representatives of the private business sector (tour operators, etc.)

He also spoke with the country's media - print and electronic.

There were numerous publications and reports, showing the successive interviews granted to the Minister, a fact which confirmed the intense interest of Russian travelers to Greece.

In addition, the increased publicity ofhis visit was an occasion for the promotion of our country as an ideal destination, with particular emphasis on the safe opening of Greek Tourism for 2021.

Summarising his trip to Russia, Theocharis pointed out that "my visit to Russia was extremely constructive."

"In 2019 we hosted over 500,000 Russian travelers in Greece and with this year's opening of Greek Tourism we are ready to welcome every Russian tourist who wants to spend an unforgettable, absolutely safe vacation in our country," he said.

"The long-standing friendship between Russia and Greece was evident in all the contacts I had during my stay in Moscow," the minister continued.

"The love of the Russians for our homeland is reflected in practice, in the events for the anniversary of the Revolution of 1821, but, I would say also in the efforts that we make together in order to free tourist movements and simplify formalities," he said.

"I leave Russia only with optimistic messages for the resumption of tourist activity to Greece," Theocharis added. 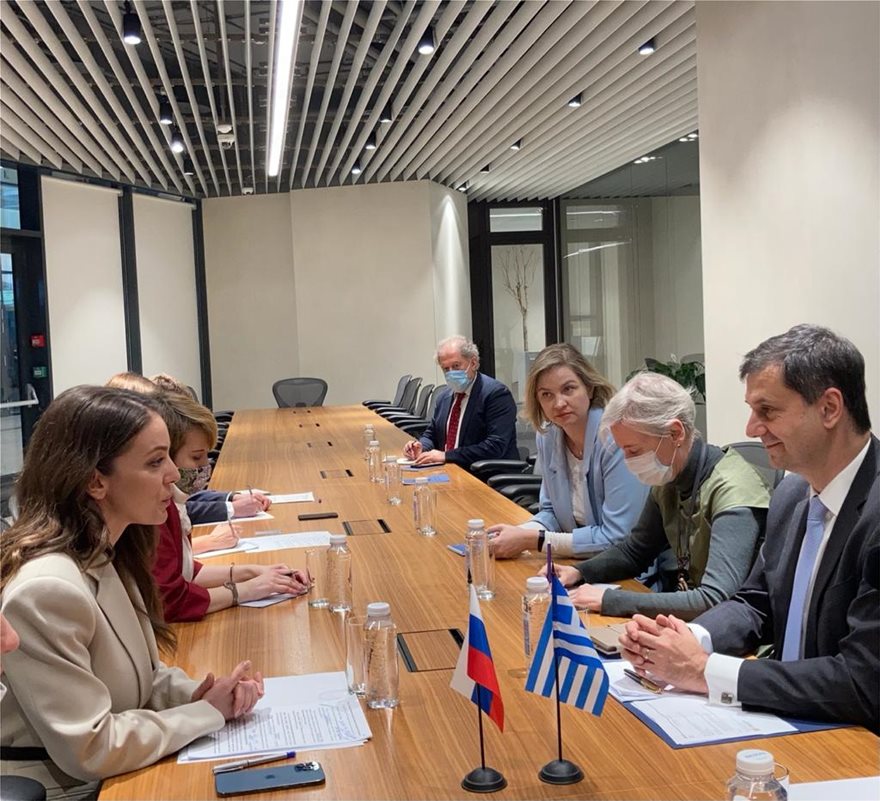 The working meeting of Theocharis with the Deputy Minister of Transport of Russia, responsible for tourism, Dmitry Zverev, was of great importance.

In his statements, the Minister of Tourism described his cooperation with Zverev "as a positive step towards the common direction and our goal: The opening of the skies, the safe resumption of air travel."

For his part, Zverev welcomed the positive attitude of Greece towards the Russian-made Sputnik V vaccine and thanked the Greek Minister of Tourism for his understanding and cooperation.

In Moscow,  Theocharis also had a meeting with the head of the Federal Tourism Organisation, Zarina Valeriyevna Doguzova, as well as with representatives of the largest tour operators in the country.

As the Minister pointed out, "Russian tourists have already chosen our country as a destination and all that remains is the official freedom to travel."

It is underlined that after his meeting with the Minister, the General Manager of TUI Russia, Taras Demura stated that "in 2021 we will be able to send 300,000 tourists to Greek resorts."

"A precondition for this is for Russia and Greece to take all the necessary decisions so that on May 14 there can be a resumption of air traffic between our countries without restrictions," he added.

Demura assured Theocharis that TUI Russia will start charter flights to Crete from Moscow and Yekaterinburg, as well as to Corfu from Moscow, Rostov-on-Don and Kazan.

In addition, TUI Russia is ready to offer tourists trips with regular flights to Athens, the resorts of Halkidiki, the Peloponnese, and the islands of Zakynthos and Santorini.

Speaking to the Izvestia newspaper, the Minister of Tourism had the opportunity to clarify some key elements for the opening of 2021.

Theocharis explained that "as we have announced, we intend to open on May 14. This is the date on which most restrictions will be lifted and the final system will be operational."

"This means that travelers will be accepted, e.g. from Russia if they have either a vaccination certificate or a negative PCR test. Tests will be conducted at airports and those visitors tested positive for COVID-19 will be isolated," he explained.

"We are gradually lifting the restrictions, and especially for Russia, the discussions are at an advanced stage," the minister added.

Finally, he stressed that "Greece has never suspended the process of issuing travel visas to Russian tourists" while in an interview given to the ITAR-TASS agency, Theocharis stated that "we are ready to welcome tourists from Russia safely for their health."

"In Greece last year we proved that the pandemic does not exclude safe tourism," he continued.

"Greece has a comprehensive plan for 2021, which allows us to ensure that by removing both domestic and foreign restrictions, we will be able to ensure public health and the health of tourists," the minister stressed.

Dendias' diplomatic whirlwind tour, with a lot more to come