The shutdown of thousands of businesses, lockdowns in public transport and reduced production in various sectors have helped reduce greenhouse gas emissions, which are the main target in the effort to curb climate change.

In fact, Greece managed to be at the top – based on the official data of Eurostat – of the list of European countries with the largest reduction in gaseous pollutant emissions, along with Estonia.

Specifically, Greece and Estonia were among the EU Member States that saw the largest drop in the CO2 index last year with reduction rates of 18.7% and 18.1% respectively. 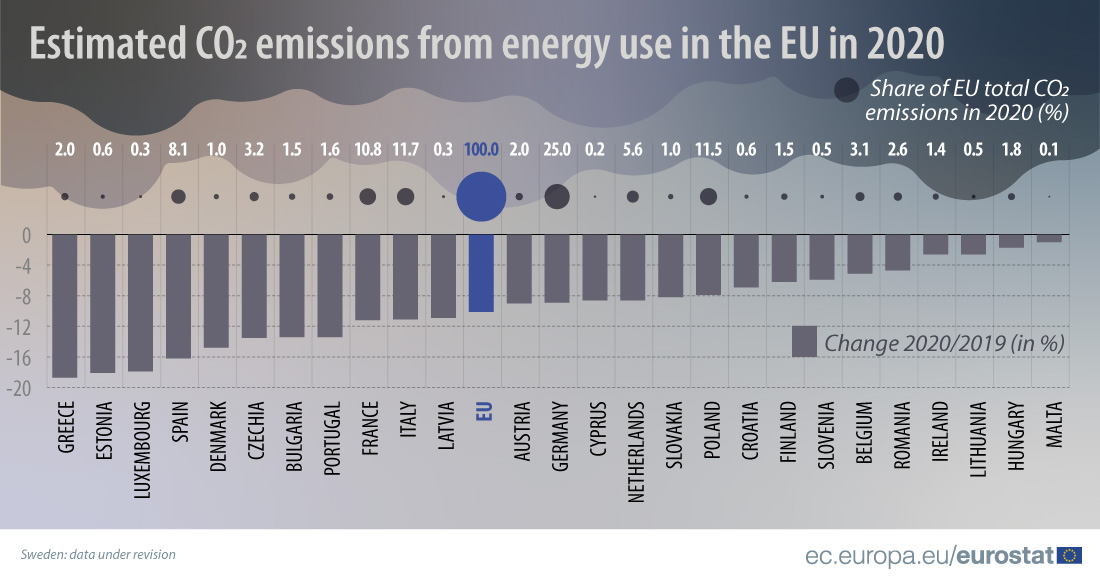 In contrast, Malta and Hungary showed the lowest rates of environmental burden reduction.

The overall picture of emissions shows a clear decline across the EU in 2020.

It is estimated that Greece is likely to maintain the positive momentum of emission reduction in the first months of 2021 due to the impact on the economic life and daily life of the strict measures against COVID-19.

Eurostat estimates that thanks to pandemic mitigation measures by Member States, carbon dioxide emissions from fossil fuels (mainly oil and petroleum products, coal and gas) have been reduced by 10% compared to the previous year.

Government policies to deal with the crisis and different working standards have led to the suspension of many companies, closed borders and left people at home, resulting in reduced transport and changes in consumption.

CO2 emissions from energy consumption contribute significantly to global warming and account for around 75% of all anthropogenic greenhouse gas emissions in the EU.

The factors that contribute to the increase of emissions are many and mainly the climatic conditions (eg cold, long winter or hot summer), economic growth, population, transport and industrial activities.

Chroussos: 70% of the population must be vaccinated for immunity wall

EU job-seeking aid worth €1.5 million for dismissed workers in Greece