The father of Turkey's failed "Blue Homeland" theory to steal Greek maritime space has now called for his country to have an illegal maritime border with Palestine.

He said that this should be based off the model that Turkey signed with the so-called "Turkish Republic of Northern Cyprus" (TRNC) that is recognised by no other state in the world except Turkey.

"The continental shelf delimitation agreement we signed with the TRNC in 2011 is an example," he said, adding: "This agreement is valid even though the TRNC is not a member of the UN."

The so-called TRNC was deemed an illegal entity by United Nations Security Council resolutions 541 and 550.

"Similarly, this agreement can be signed with Palestine," said Yaycı, adding that the move would contribute to the international recognition of Palestine, which would be considered "top political support for the Palestinians." 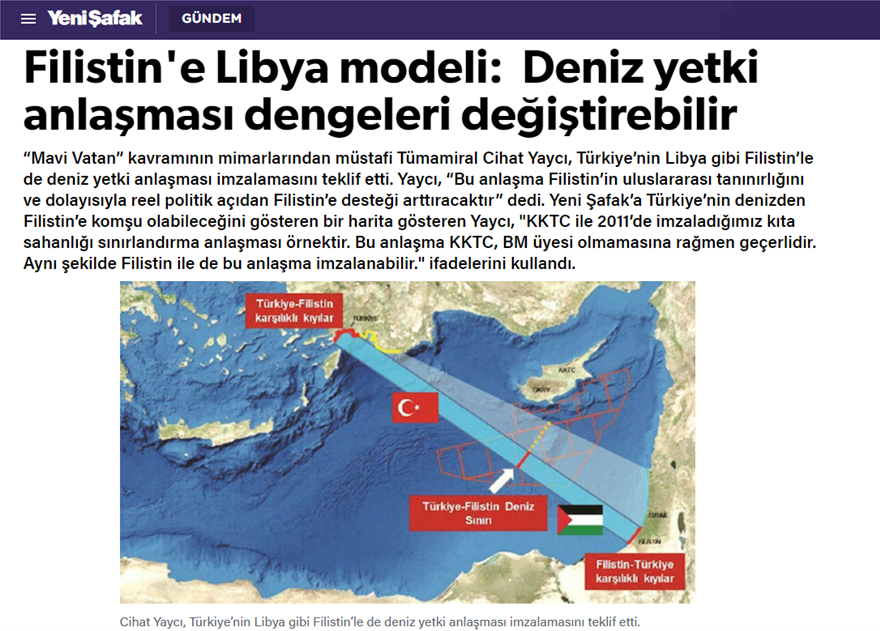 The head of the Center for Naval and Strategic Studies at Istanbul's Bahçeşehir Private University said a signing of the Turkish-Palestinian maritime border would work against Israel.

"East-Med membership is an indication that Palestine is an international organization on its own along the Eastern Mediterranean coast," he said.

"It will be a strategic move in our favour," the theorist claimed.

According to Yaycı's map, the maritime borders of Turkey and Palestine meet in that is internationally recognised as Cyprus' Exclusive Economic Zone.

READ MORE: Blue Homeland theorist renames the Aegean to “Sea of ​​the Islands.”

4.3 million vaccinations given in Greece

Monument dedicated to the Greek Genocide in Pontus unveiled in Connecticut