Palaiologue is the new slow-fashion clothing brand created by Greek-American, Vicky Hioureas. Her first collection has drawn lots of attention for its unique philosophy and connection to the traditional clothing of rural Greece.

Hioureas was born and raised in a suburb of Los Angeles to Greek parents who emigrated from the Peloponnese—Argos and Mani.

Like many Greek-Americans, she grew up nurtured by Greek folk dance, music, and traditions through her local community, and her first experience with Greek folk clothing was when she wore a dress from Metaxades, Evros for a dance competition when she was five.

From then on, Hioureas’ love for Greek dance and folk traditions took root and evolved into a deep interest in the cultural history of the Greek world.

She explained to Greek City Times: “On every trip to Greece, I spent a lot of time in difficult cultural museums in cities, but also in villages, recording and studying local dress, music, and dance.

“At the same time, I was learning how to weave on a loom and embroider from the older women in the villages I visited.” This passion for the history of local traditions eventually piqued her interest in formally studying classical and medieval Greece, and Hioureas is currently completing her PhD in Byzantine history at Princeton University.

Of course, the name Palaiolgoue is a not-so-subtle reference to the last family to rule the Byzantine Empire: the Palaiologos dynasty.

Regarding the Byzantine connection, Hioureas reflects: “Of course, it would be difficult for me to not find inspiration from this period of history, being a Byzantinist myself.

“The delicate embroidery and loom-work, along with the bright colours and patterns in Byzantine art and artifacts are inspirational, and I believe that this pluralistic tradition of clothing throughout Greece is a distant echo of Byzantium.” 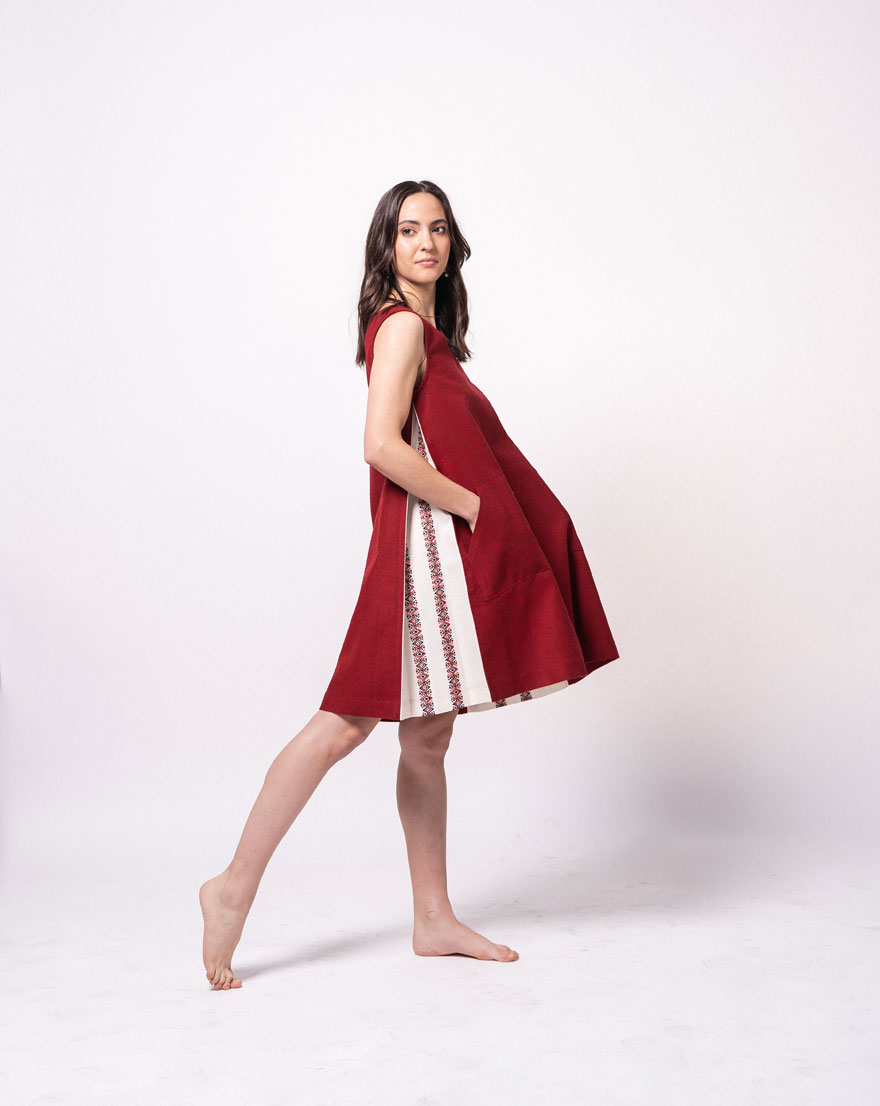 Her inspiration for starting Palaiologue came years ago when her travels between rural and metropolitan areas in Greece left her wondering why this rich tradition of clothing in Greece was either closed off either in museums or locked in the closets of cultural organisations, which were removed and worn only a few times a year as “costumes” for dance performances.

Hioureas pointed out that Greek music and cuisine has evolved into a fresh, modern context, and its success has been through the reinvention of something traditional.

She created Palaiologue as she wanted to see the “gourmet-ification” that happened for both music and food to hit the world of fashion. For decades, there was an active turn away from the rural fabrics and dress styles, and Greek women were instead dressing in mass-produced fast fashion, imported from distant countries.

Hioureas proudly states that “we have this incredibly unique, rich heritage that represents the regional differentiation of Greece.

“I think it’s time to rethink the form and function of rural clothes and bring them into a modern context.

“Palaiologue’s designs are reflections of traditional patterns and fabrics of different regions of Greece, but without them looking like I took pieces of ‘costumes’ and added them to a modern outfit.”

And while recently there has been a kind of renaissance in Greek fashion—with a number of companies creating folk-inspired resortwear that have been wildly popular and favoured by Greeks and tourists alike, Hioureas wanted to create something that could be very clearly related to the specific weaving and embroidery motifs of each, separate village and region in Greece. “I think it’s important to express this wealth of design and aesthetic native to these distinct villages and regions. Maybe this way, there will be a focus on the different communities and histories that make up Greecem” she said.

So what are Hioureas’ plans for the future of Palaiologue?

“Each season will be based on the local dress of a specific village of Greece,” she said.

“My goal is to have people who wear Palaiologue learn the geography and local history of the country through each dress they wear.

“I’d love to see the younger generations of Greek women dress in a way that connects them organically with their history and traditional aesthetic.

“I believe these dresses have a diachronic quality that a lot of women are searching for.”

READ MORE: Theophano: A Byzantine Tale, the MUST read comic with the most beautiful illustrations.