In Gwadar, a developing port town in southwest Pakistan, Adam Qadir Baksh had been hoping for a major leap forward in his automobile spare parts business since 2015, but it has not happened in the absence of the vital Chinese tailwind once promised under CPEC.

“There has been no benefit from the China-Pakistan Economic Corridor for local parts vendors and other suppliers,” Baksh told Nikkei Asia.

His unhappiness goes back six years to President Xi Jinping’s visit to Pakistan and the official launch of bilateral infrastructure development projects under the Belt and Road Initiative (BRI).

Baksh said Pakistan has not benefited because for CPEC projects virtually everything is imported from China.

About half the money pledged by China has already flowed in with investments and intergovernmental lending, pushing Pakistan’s economic growth above 5% in 2017 and 2018.

But those who have yet to benefit from Chinese largesse are losing hope and becoming restive.

The main road leading to Gwadar Port has been blocked since Nov. 15 by thousands of locals in a sit-down protest demanding basic amenities, including water and power, as well as access to the sea for fishermen.

“If our demands are not met, we will close down CPEC,” said Molana Hidayat, a local leader, during one bellicose address. 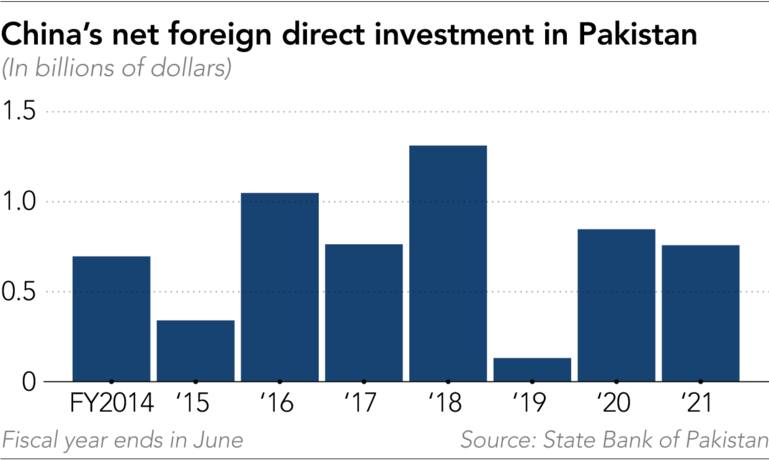 Pakistan has seen a decline in direct investment from China. According to the State Bank of Pakistan, the central bank, Chinese FDI in the quarter that ended in September was just $76.9 million compared to $154.9 million in the same quarter last year.

FDI in the fiscal year that ended in June was also markedly down. Excluding fiscal 2019, which included a general election, the inflow totaled $757 million — the least seen since 2015.

In most years, Chinese FDI is 30-50% of the total, so the downward turn is a warning light for the economy.

The Chinese slowdown is also evident in Pakistan’s trade figures. United Nations’ data shows that China’s exports to Pakistan have been declining since a $15 billion peak in 2017.

There is a clear downward trend in manufactured goods and materials; iron and steel — both crucial to infrastructure development — fell steadily by 40% overall between 2016 and 2020. 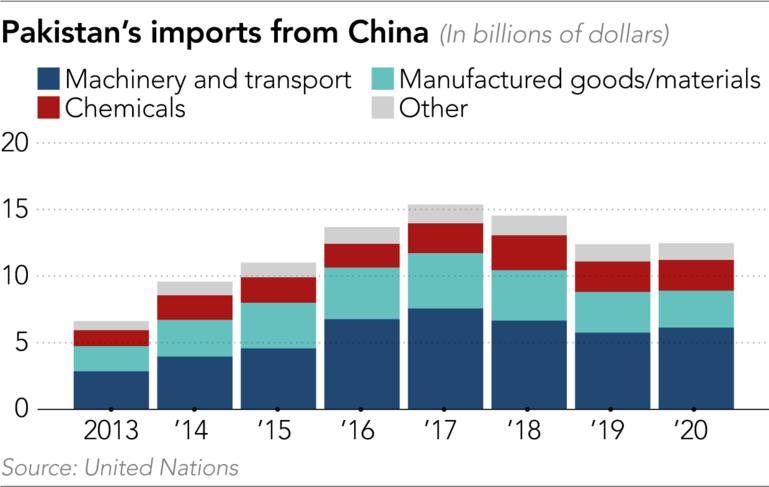 Mosharraf Zaidi, chief executive of Tabadlab, a think tank based in Islamabad, said CPEC has also had a profound impact on urban and highway transport, and helped in the construction of numerous roads connecting villages.

“No bilateral partner of Pakistan has been as central to the economic story of the country as China and the CPEC framework,” he told Nikkei Asia.

However, there are a number of projects that have stalled, including the Main Line-1 railway project — the costliest CPEC component at $6.8 billion to upgrade the Karachi-Peshawar rail link.

China was meant to lend $6 billion, but unresolved differences between the two governments have lasted over a year, leaving the project untouched.

The discord is not new, but generally kept behind closed doors. China’s displeasure has, however, occasionally been leaked.

Around early 2019, Yao Jing, the Chinese ambassador, met in Quetta with officials from the Balochistan provincial government. Although it was never officially confirmed, he was extremely critical.

“You people are not taking seriously the delays in the issuance of permission to a Chinese company to start working on a coal-fired power plant in Gwadar,” he said.

Such rifts between the two sides have become more evident, and led to reduced Chinese investment and exports to Pakistan.

Islamabad is alarmed by the costliness of Chinese projects.

Tabish Gauhar, Pakistan’s special assistant to the prime minister on power and petroleum, stated in cabinet in August that a CPEC power project is 25% more expensive than the international norm.

“The Chinese ambassador has complained to me that you have destroyed CPEC, and that no work was done in the past three years,” Saleem Mandviwalla, chairman of Senate Standing Committee on Planning and Development, said at a September committee meeting after Chinese diplomats and officials defended the 135 Chinese companies operating in Pakistan.

“China has become more cautious in general and with regard to Pakistan,” James M. Dorsey, a senior fellow at the S. Rajaratnam School of International Studies in Singapore told Nikkei. “As many investors do, they look more at the return on investment than they did before.”

Dorsey believes the turning point for China came in early 2020 with the COVID-19 pandemic and continuing trade disputes. He believed another significant reason to be the growing number of foreign governments failing to keep up with repayments.

Other factors may be playing into the slowdown, power generation being a good example. With its new plants online, Pakistan’s installed capacity has reached almost 40,000 megawatts while peak electricity demand is 25,000 MW.

Terror attacks on Chinese interests have also had a chilling effect on economic cooperation. Most recently, nine Chinese nationals were killed by terrorists near the Dasu hydropower project in northwest Pakistan. 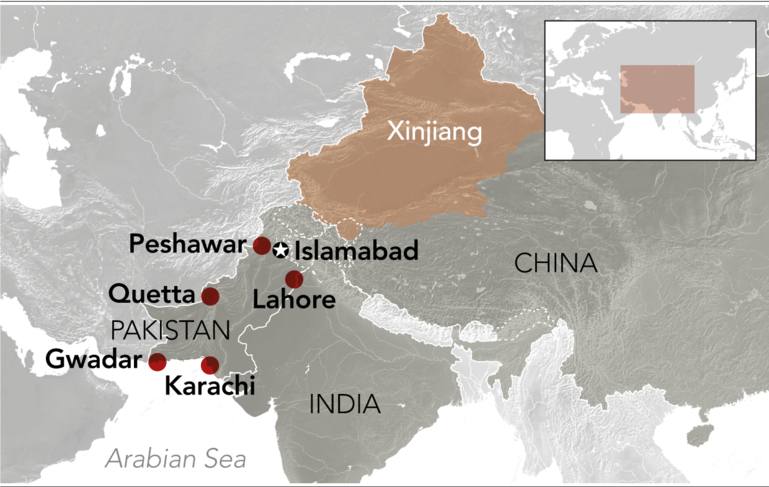 Michael Kugelman, deputy director of the Asia program at the Wilson Center in Washington, is in no doubt that Beijing’s security concerns have affected investment.

“The fact of the matter is that Chinese targets keep getting hit, even after Beijing expresses its concern and calls for better security,” he told Nikkei.

Pakistan’s lack of responsiveness dampens China’s appetite for fresh projects. The messy U.S. withdrawal from Afghanistan in August, and the return of the Taliban to Kabul, could worsen the uncertainty.

CPEC facilitated development of the road link between Gwadar and Quetta, the capital of Balochistan Province. That reduced travel time and should have offered transport companies business opportunities in Gwadar.

“The passenger transport business to Gwadar has done well over the years,” said Muhammad Arif, general manager Al Safeer Public Transport Company in Quetta. “However, none of us have taken advantage of goods transport opportunities because Gwadar Port has failed to kick-off so far.”

“There have only been occasional opportunities to transport cargo, mainly for Afghanistan transit trade, but the transporters have not got any major business out of the port’s cargo operations,” said Ilyas Khan, who works at another local transport company.

“We were expecting that a lot of cargo would need to be transported out of Gwadar, and we were banking on that to grow our business, but those expectations have not translated into reality,” he said.

Jeremy Garlick, an associate professor of international relations and China studies at Prague University of Economics and Business, confirms that China is becoming increasingly cautious about investing in Pakistan.

“Given current global tensions and the consequences of the COVID pandemic, I would say it is likely that we will see an ongoing slowdown in the pace of Chinese investments in the next few years,” he told Nikkei.

Since the inception of CPEC in 2015, Chinese investments have been crucial to the Pakistani economy. Beyond alleviating power and connectivity problems, Pakistan has used Chinese money to pay off other lenders, including Saudi Arabia and the U.A.E.

The reduction in Chinese FDI in the quarter ended in September coincided with an increase in FDI from the U.S. In the three months, it jumped fourfold to $100.9 million just as China’s halved to $76.9 million.

Experts thinks it is too simplistic to interpret this as simply the U.S. stepping in to replace China. Jeremy Garlick sees no sign of the U.S. being prepared to invest more in Pakistan because of its past experience and Pakistan’s long-term cooperation with China.

“Pakistan is going to have to search elsewhere for funds if it is unable to secure them from Beijing,” he said.

“U.S. officials have long sought to project U.S. investment in Pakistan as a more equitable and sustainable alternative than Chinese projects,” said Kugelman.

He nevertheless believes that China can deliver investment and lending more quickly, plentifully and with fewer conditions than the U.S.

“Let’s be clear, it beggars belief to assume that the U.S. can replace Chinese capital in Pakistan,” he said.

“It can’t wean Pakistan off China,” he said. “Pakistan is deeply allied with China, unlike many countries in the region and beyond that seek Chinese economic support but are not firmly in China’s camp.”

China and Pakistan remain bonded by their perception of India as a common enemy. China wants a friendly neighbor to its south, while Pakistan seeks the blessing of a global power that is not transactional like the U.S.

Can Pakistan re-energize Chinese interest and investment? One Pakistani official believes not.

“With the end of the early harvest phase of CPEC, China-led infrastructure development has peaked in Pakistan,” a government official told Nikkei on condition of anonymity.

“CPEC is not over yet, but in the remaining nine years, we can’t expect to see even a fraction of the infrastructure development that took place between 2015 and 2020,” he said.